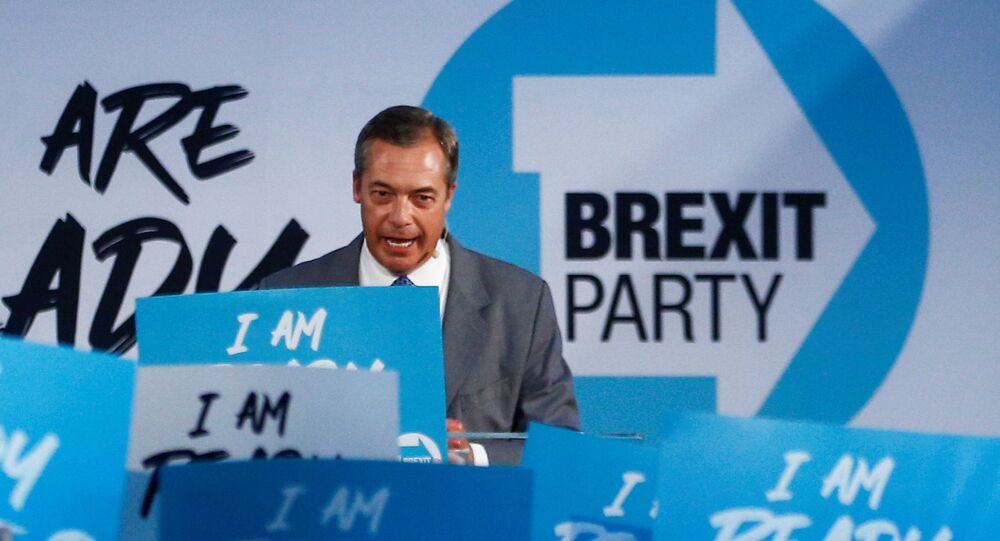 There has long been talk of the possibility of an alliance between the ardently pro-Brexit ‘do or die’ wing of the Conservative Party, led by Boris Johnson, and Nigel Farage’s Brexit Party. Such an eventuality had for a long time been dismissed as unlikely, but now, it appears that the political equation could be shifting.

The Brexit Party has called upon Boris Johnson to ignore the advice of his chief strategist Dominic Cummings and "pick up the phone" to call leader Nigel Farage in order to make an electoral pact, according to the Daily Express.

The newspaper reports that Martin Daubney, who is one of 29 Brexit Party candidates elected to the European Parliament in the May 2019 elections, said that, “as things are delicately balanced right now I don’t think it is best to kick the hornet’s nest over this. Boris can go around Cummings if he wants and the lines are open.”

“It is time for Boris to do a deal with the Brexit Party. But with his options narrowing by the day, we are his best chance of securing a healthy majority and stopping the nightmare of Prime Minister Corbyn. It’s time to put aside personal differences and put country before party,” Mr Daubey is quoted by the Mirror as saying.

​The revelations come as a snap general election to break the Brexit impasse looks all the more likely if Boris Johnson is unable to renegotiate a new withdrawal agreement with Brussels before the October 31 deadline. Voices are growing louder within both the Brexit Party and the pro-Brexit wing of the governing Conservatives for a pact between both parties in the event that an election occurs. Fears among them are mounting that the opposition Labour Party, led by Jeremy Corbyn, will enter into its own pact with other opposition parties to win No.10 Downing Street.

Yet, many hardliners within the Conservatives reportedly feel that Johnson’s strategist, Mr Cummings, is an obstacle to any successful electoral partnership with Nigel Farage. Cummings is widely known to harbour hostility toward Mr Farage and is said to have claimed following the 2016 Brexit referendum that the former UKIP leader could have taken hundreds of thousands of Conservative party supporters of Brexit if he had been given more television airtime.

A senior Conservative party source recently told the Telegraph on condition of anonymity that, “Cummings is the obstacle to any deal between Johnson and Farage” and that the strategist “hated” the idea despite Mr Johnson being somewhat open to it.

“He [Cummings] regards Farage as a grubby little street urchin,” the source added.

Mr Farage has also vented his opinion on the idea of an electoral pact with Johnson, telling the BBC this week that, “if you put the support of Boris Johnson Conservatives and the Brexit Party together, the truth is, in a general election with a clear policy, we would be unstoppable.”

On Brexit, Boris Johnson currently finds himself politically cornered and fast losing options after the parliamentary opposition in concert with Tory rebel MPs voted in favour of a bill intended to block a no-deal Brexit, which is soon expected to become law. Additionally, Boris Johnson’s hopes of ramming through a no-deal Brexit by holding a general election that could have increased his numbers in parliament were also struck down when a majority of MPs voted against such a move this week. Since then however, the Prime Minister has suggested that he may be willing to break the law in order to avoid extending the October 31 deadline, saying in a letter that was reportedly sent out to Tory MPs on the evening of September 6th that, “they just passed a law that would force me to beg Brussels for an extension to the Brexit deadline. This is something I will never do.”