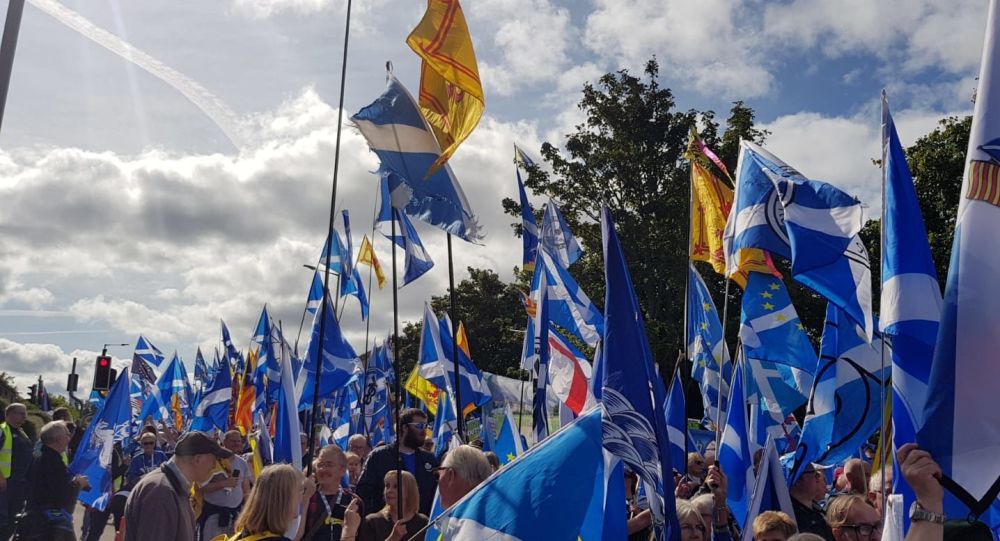 Organised by the activist group ‘All Under One Banner’ Scottish nationalists from across the nation gathered in Perth on Saturday to march and promote the case for an independent Scotland in a city that voted to remain in the UK back in 2014.

Over 15,000 protestors marched through the city of Perth on Saturday as part of a series of demonstrations taking place across Scotland in support of Independence, according to police estimates. Often referred to as the nation’s ‘fair city’ Perth originally voted against Scottish Independence in 2014 when Westminster granted the people of Scotland a chance to vote on the future of their country.

Saturday’s demonstration kicked off at 1:00pm at Seven Acres Park in the west of the city, before starting its three-mile procession around the town centre. The march attracted a diverse range of peaceful, good natured and imaginative forms of protest.

Amongst a sea of blue and white saltires, a symbol long associated with Scottish nationalism, Catalan flags were also flying high as a way to pay homage to demonstrations of national self-determination around the world. 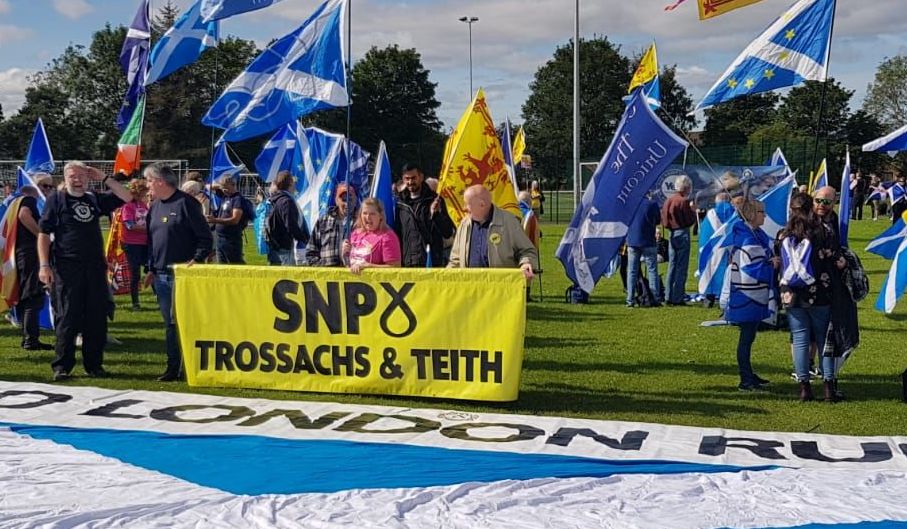 Littered among the flags were slogans attacking the UK’s incumbent Prime Minster Boris Johnson and the ever-growing likelihood of a No Deal Brexit – a prospect that remains deeply unpopular after Scotland voted to remain in the European Union in 2016. 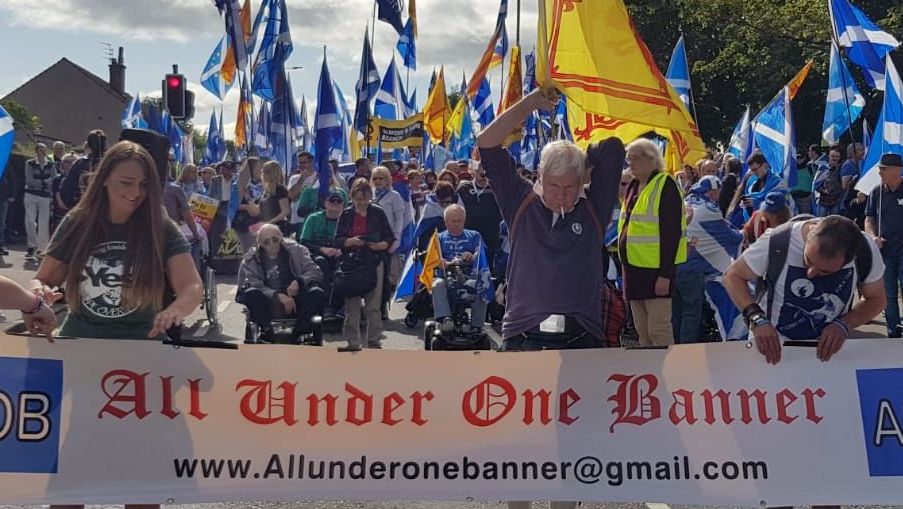 © Sputnik / Alex South
All Under One Banner represent a collection of a Scottish independence groups who have organized marches in Aye, Aberdeen and Perth

Pro-independence protesters said that worries about the future of the next generation were the primary reason they were on the streets.

"We've had a hard time  recently as well as many other people in Scotland. I want a better quality of life for myself and my kids moving forwards into the future," John, a demonstrator who did not give his last name, said.

"I moved back [to Scotland] from London last year after being away for 20 years. Originally I could not find any work in Scotland but I've moved back to fight for my future and my kids future," another protester, Linda, remarked.

Despite the large turnout of protestors, coverage from mainstream media outlets such as the BBC was minimal; highlighting the broadcaster’s stance on Scottish Independence – a position that has been repeatedly criticised as ‘biased’ and ‘lacking’ by many.

Amongst the sounds of drums, bagpipes and a varied song sheet of chants about independence and Britain’s handling of Brexit; another protest was being staged next to the pro-independence demonstrators. 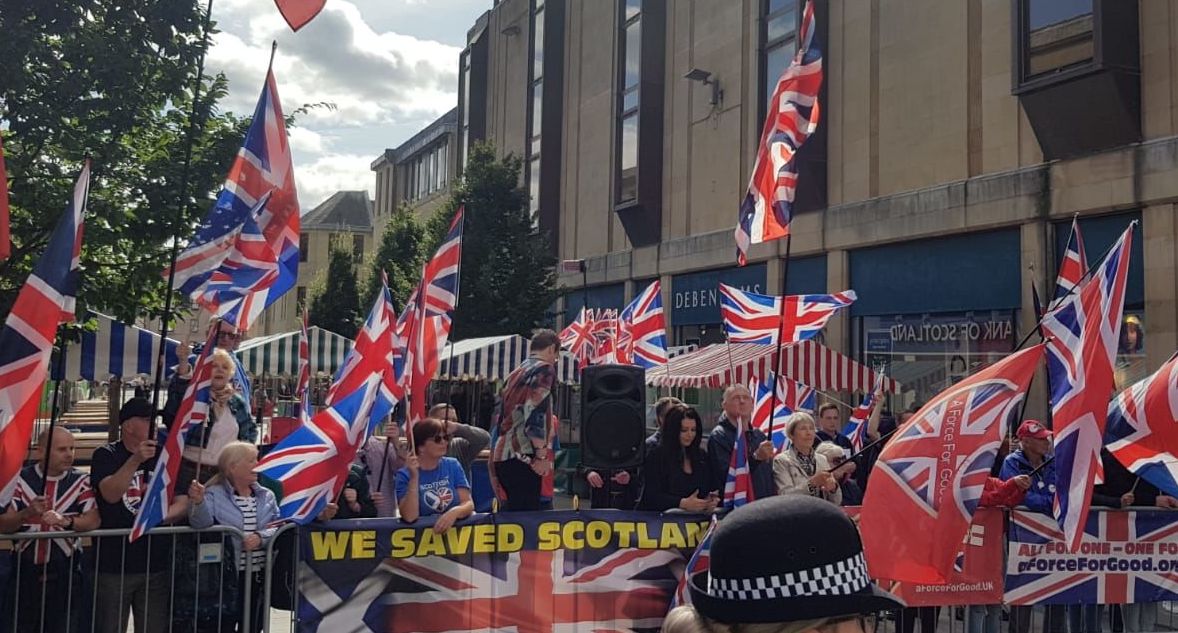 A pro-unionist organisation called ‘A Force for Good’ staged a counter protest against the rise of Scottish nationalism and recent independence demonstrations in the cities of Ayr and Aberdeen. Despite the polarised politics of the groups, both protests were peaceful with no trouble between the rival groups.

But despite the counter demonstration, it seems that very little will quell the rising nationalist sentiment in Scotland.

According to recent polling data, support for Scottish Independence is at an all-time high and the demonstration in Perth will only strengthen the hand of First Minister Nicola Sturgeon, who on Friday reportedly entered talks with Britain’s Labour Party to block Boris Johnson’s plans for a general election before the upcoming EU summit on 17 October.

​Johnson has repeatedly stated that he is against the idea of a second referendum on Scotland’s sovereignty believing that the UK should remain together as a political, economic and cultural union – a view that is shared by the majority of the Conservative Party.

However with Britain’s Labour Party things aren’t as clear cut. In August, the Leader of the Opposition Jeremy Corbyn reignited the hopes of Scottish nationalists while speaking in the Scottish town of Dunfermline as part of three-day visit north of the border. The Labour Leader said he would not allow a Scottish independence referendum “in the formative years” of a Labour government but claimed he would not block a new poll at a future date if there was a “legitimate and fresh” mandate for it.

As a result, the future of Scottish independence seems to be on pause for now despite its rising popularity among the Scottish people. For now the subject rests on the duration of Boris Johnson's government and the outcome of the upcoming general election.