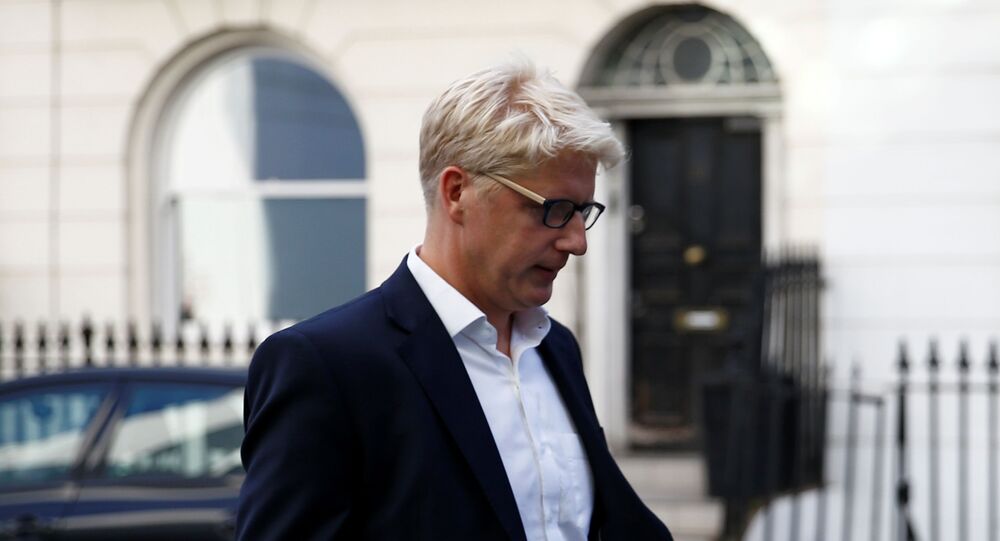 UK Prime Minister Boris Johnson's brother, Jo Johnson, announced on 5 September he would resign as cabinet minister and MP, stating he was "torn between family loyalty and the national interest".

The resignation of now-former UK business minister Jo Johnson, brother to current Prime Minister Boris Johnson, has featured on the front pages of UK media today, to greater and lesser degrees, as The Guardian branded the resignation “an extraordinary blow” to Boris Johnson’s premiership.

The paper ran the headline: “I quit. Jo Johnson puts country before family.”

​According to the publication, “the dramatic move by the younger Johnson … sent shockwaves through the Conservative party and appeared to severely rattle the prime minister as he visited a police training academy”

Choosing a more visual approach, The Mirror ran a photograph of Boris, Rachel and Jo Johnson with the headline: “Even Boris’ own family don’t trust him”.

​According to the paper, “Boris Johnson’s own family have turned on him over his bid to crash out of the EU”.

The publication offered a quote from Boris Johnson’s sister, Rachel, telling the PM to “climb down from the greasy pole”.

“Johnson suffers fresh setback as brother quits government”, was the FT’s headline, with the paper underscoring that “the Brexit crisis enveloping Boris Johnson intensified yesterday when his youngest brother quit the government”.

​The i reported: “PM defiant as brother walks out”. It similarly cited the words of Jo Johnson that he cannot strike a balance between “family loyalty and the national interest”.

​The Evening Standard juggled around with its headlines, as its initial headline of: “Disaster for Boris as brother quits”, was subsequently changed to the more catchy “Blow for Bojo as bro Jo go goes”.

Thank goodness someone realized they could do better pic.twitter.com/3nYz11gpv2

​Other papers, like The Telegraph and The Times, opted to lead on the Brexit delay and potential election on 15 October.
The Telegraph wrote: “Labour plotting to push back election to November”, saying that “the Labour leader believes he can trap Boris Johnson by refusing to agree to his preferred election date, forcing him to seek a Brexit extension before a poll is held.”

​As it ran the headline: “No election until Brexit is delayed”, The Times did get around to the news involving Jo Johnson news later in the story, calling it “a torrid day for Mr Johnson”.

THE TIMES: No election until Brexit is delayed #TomorrowsPapersToday pic.twitter.com/phzfCr820j

​The Express swooped in on the much-quoted phrase from the prime minister on Thursday: “I’d rather be dead in a ditch than delay Brexit”, qualifying the comment from Boris Johnson as “a defiant blast” in which “the prime minister insisted that he would not allow MPs to force him to go to Brussels to postpone the UK’s departure from the bloc”.

Tomorrow’s @Daily_Express #frontpage
- #BorisJohnson says 'I'd rather be dead in a ditch than delay #Brexit '
- Her Royal shyness: Caring #PrinceGeorge soothes #Charlotte 's fears on first day at school#tomorrowspaperstoday pic.twitter.com/9yqnvHL6kC

​UK Prime Minister Boris Johnson's brother, Jo Johnson, announced he was resigning as cabinet minister and MP after revealing he was "torn between family loyalty and the national interest".

Jo Johnson said that it had been an "honour" to represent his constituency of Orpington for nine years and as minister under three Prime Ministers.

However, he cited "unresolvable tension" and said it was "time for others to take on my roles" as an MP and minister.
His resignation is the second in his career, since quitting as Transport Minister in protest over former UK Prime Minister Theresa May's Brexit agreement with Brussels in 2018.

During the 2016 EU referendum, Jo Johnson had voted to remain in the European Union, while his brother Boris Johnson vociferously advocated for the Leave campaign.

The current news comes as the British Prime Minister Boris Johnson failed to secure a majority to approve triggering snap elections, with MPs voting 298 to 56 for and against, respectively, falling short of the 434 lawmakers required.

Earlier, the Commons had adopted a bill to push back Brexit after the 31 October in case there was lack of progress in negotiating a deal with Brussels.

Boris Johnson has vowed to take the United Kingdom out of the EU by the 31 October deadline with or without a deal, but is struggling after losing his parliamentary majority amid uncertainty over whether the UK will be able to renegotiate with Brussels.