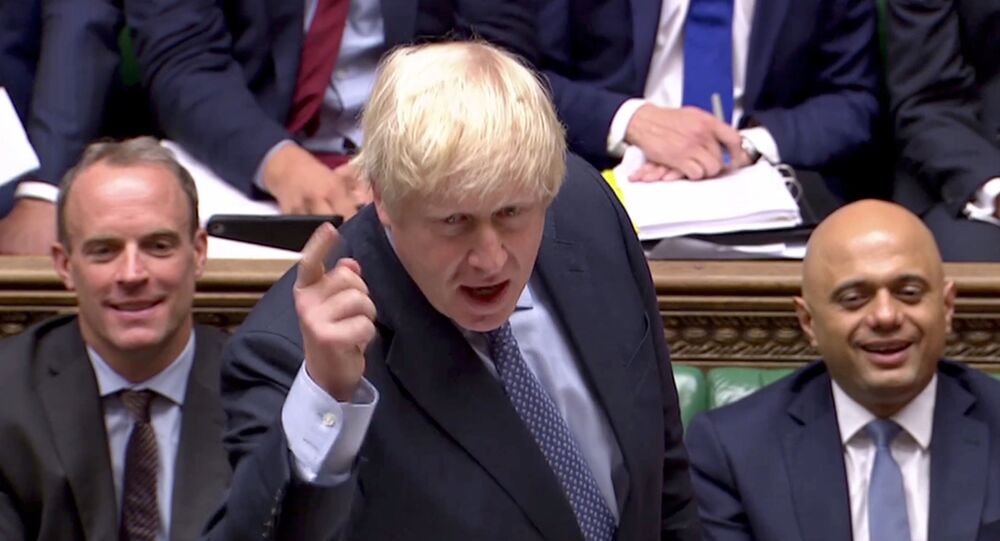 Prime Minister's Questions (PMQs) moved at a frantic pace as UK prime minister Boris Johnson and Labour and opposition leader Jeremy Corbyn squared off in a heated battle over Brexit, which saw a flurry of insults and accusations thrown from both sides.

Boris Johnson and Jeremy Corbyn Square Off at PMQs

After paying respects to PC Andrew Harper, who was killed whilst on duty in August, UK Labour and opposition leader Jeremy Corbyn asked if it was right that the Prime Minister's Brexit strategy involved "running down the clock" and that UK attorney general Geoffrey Cox believed that the EU abandoning the Irish backstop was a "fantasy", according to reports from the Telegraph on Tuesday night.

But PM Johnson responded in parliament on Wednesday by slamming Corbyn's "surrender bill", stating that the shadow PM wanted "mobs of Momentum activists" to disrupt roads and traffic.

Mr Corbyn asked the Prime Minister to answer whether any proposals had been submitted to the EU, as well as progress made on the Irish backstop and other concerns, and later accused Mr Johnson of not having any solutions.

"If the PM thinks he has made progress, will he publish those proposals," Corbyn asked.

Mr Johnson responded by stating "you don't negotiate in public" and that the government had been making "substantial progress" in talks with the EU, as well as reaffirming that the UK would "get a deal" with Brussels.

No 10 hit back at Corbyn by accusing him of undermining the government's efforts with "this surrender bill that will lead to more dither and delay", adding that he wanted 20,000 more police on the streets to tackle crime and that Mr Corbyn wanted £1bn a month after October to keep the UK in the Euro bloc.

"This government will take this country out of the European Union on October 31st, and there is only one thing that stands in our way, it is the 'surrender bill' currently being proposed by the leader of the opposition [Corbyn]", Johnson told Commons.

No 10 also said that if the "surrender bill is passed" that he would "allow the people of this country to have their view on what he is proposing to hand over in their name, with an election on October the 15th".

Corbyn and Johnson were locked in a heated discussion over Michael Gove, Chancellor to the Duchy of Lancaster, and his assessment that food prices would rise under a no-deal Brexit, citing figures from the British Retail Consortium.

"Will Johnson publish the Operation Yellowhammer documents so people can see what will go up, and by how much," Corbyn asked.

But Mr Johnson denied that Gove had made such statements and accused Corbyn of worrying about free trade deals with Brussels.

"But there is only one chlorinated chicken in this house," the Prime Minister joked. "It is Corbyn. Will Corbyn let the people decide?"

​Boris Johnson later shouted at Mr Corbyn to call a general election and called the Opposition leader a "big girl's blouse", a derogatory term referring to a weak or effeminate man.

The PM said that he could not "see how anybody with a straight face" could accuse anyone of "not standing up to scrutiny" after Corbyn refused to submit his bill "to the verdict the people in an election".

Speaking on the 'contrasts' between Conservative and Labour governments, Johnson accused Corbyn of finding friends "in the Kremlin and in Tehran and in Caracas" rather than "in Paris, in Berlin and in the White House".

The British PM also said that his government was putting 20,000 police on the streets as well as upgrading hospitals, but that Corbyn wanted to place a 300bn pound tax on "every company in the country", as well as taxing homes and calling for a general strike.

Allegedly quoting the shadow education secretary, Angela Rayner, he said that the Labour Party's economic plans were "sh*t or bust".

More Trouble on the Horizon

The latest developments in Parliament come after Johnson vowed to hold snap elections if Corbyn's opposition coalition pushed to take over the government's Brexit agenda on late Tuesday. Conservatives also lost a majority in Commons, despite forging a pact with the Democratic Unionist Party (DUP), after Dr Phillip Lee MP defected to the Liberal Democrats whilst the British PM was delivering his speech on Brexit.

Shadow Brexit secretary, Keir Starmer, said on Wednesday that Labour would not vote for a general election despite Corbyn stating they were ready to contest the Tories. The news comes after 21 Tory MPs, including Sir Oliver Letwin, veteran MP Kenneth Clarke, former Chancellor Philipp Hammond and others had their whip withdrawn for rebelling against the government's Brexit strategy on Tuesday, with threats of possible deselection following a general election.

An EU Commission spokeswoman said in a press briefing on Wednesday that PM Johnson was the UK's "interlocutor at the highest political level for [EU Commission] President Juncker" and that it was still negotiating with Irish Taoiseach Leo Varadkar and others on how to implement border checks should a no-deal Brexit take place in October. Irish foreign minister Simon Coveney also told businesses that "we need to prepare for the worst".

Boris Johnson has reiterated that he will have the United Kingdom leave the EU by the 31 October deadline "come what may", or with or without a deal, and prorogued Parliament for five weeks to block opposition to a no-deal Brexit after requesting the Queen to do so in preparation for a Queen's Speech on Brexit. The British Prime Minister has refused to open talks with Brussels until the EU reopened negotiations on the Withdrawal Agreement and abolished the backstop, according to a spokeswoman for the PM.