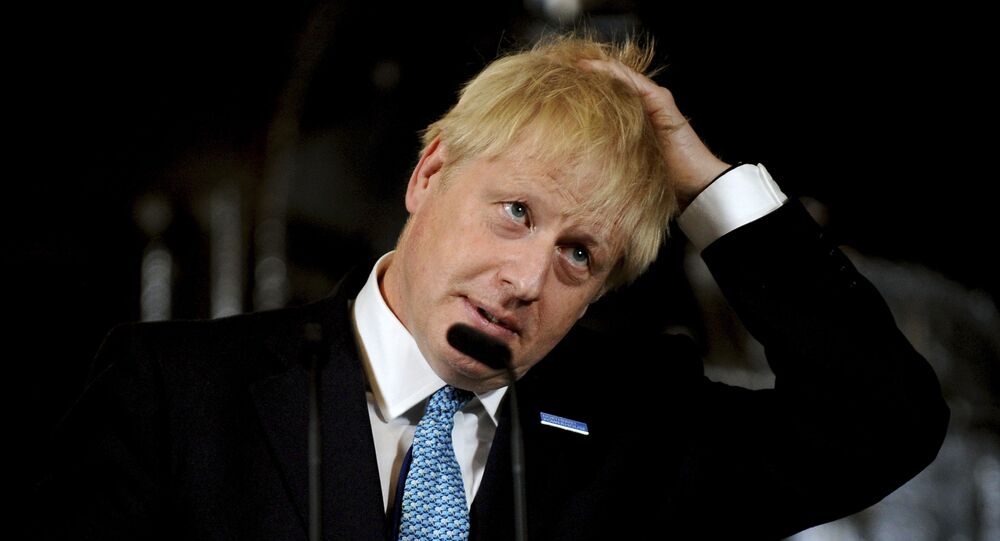 Earlier in the day, the BBC reported that newly-minted UK Prime Minister Boris Johnson would deliver a statement on Brexit outside No. 10 as rebel lawmakers are seeking to push for yet another deadline extension for the country's withdrawal from the European Union.

Boris Johnson has reaffirmed his commitment to deliver Brexit on 31 October, without "ifs or buts", stressing that "under no circumstances" will he ask the European Union to delay the UK's withdrawal.

Speaking outside Number 10 Downing Street on Monday, the British prime minister expressed a strong belief that he would be able to reach a deal on Brexit during the EU summit in October.

"We will not accept any attempt to go back on our promises or scrub that referendum. [...] And in the meantime let our negotiators get on with their work without that sword of Damocles over their necks".

As speculation has mounted that he would call for a general election amid pressure from rebel lawmakers, Johnson rebuffed the claims, arguing that he isn't seeking to hold snap elections, and urged MPs to vote against "another pointless delay".

"If they do [vote for a delay], they will plainly chop the legs out from under the UK position and make any further negotiation absolutely impossible. I don't want an election, you don't want an election. Let's get on with the people's agenda. [...] Let's come together and get it done, and let's get Brexit done by October, the 31st", Johnson said, wrapping up his speech.

His comments came minutes after Labour MP Hilary Benn published a draft legislation that would urge Johnson to ask Brussels to postpone the UK's exit from the bloc until 31 January 2020.

According to Benn, the bill, which has cross-party support, was put together in order to make sure that the UK does not leave the EU on 31 October without an agreement.

4/8 If neither of these two conditions have been met, however, by 19th October – ie the day after the European Council meeting concludes – then the Prime Minister must send a letter to the President of the European Council requesting an Article 50 extension until 31 January 2020.

The move has triggered outrage among the opposition, with the Labour Party pledging to block a no-deal Brexit, calling for a vote of no-confidence against Johnson, as well as massive demonstrations, #StopTheCoup, across the UK. It also led to resignations from Scottish Tory leader Ruth Davidson and George Young, a Conservative whip in the House of Lords, last week.

Johnson has on a multitude of occasions voiced his determination to deliver Brexit by the 31 October deadline, "with or without a deal". He previously said that the withdrawal deal negotiated by his predecessor, Theresa May, that was rejected three times by lawmakers was "dead".