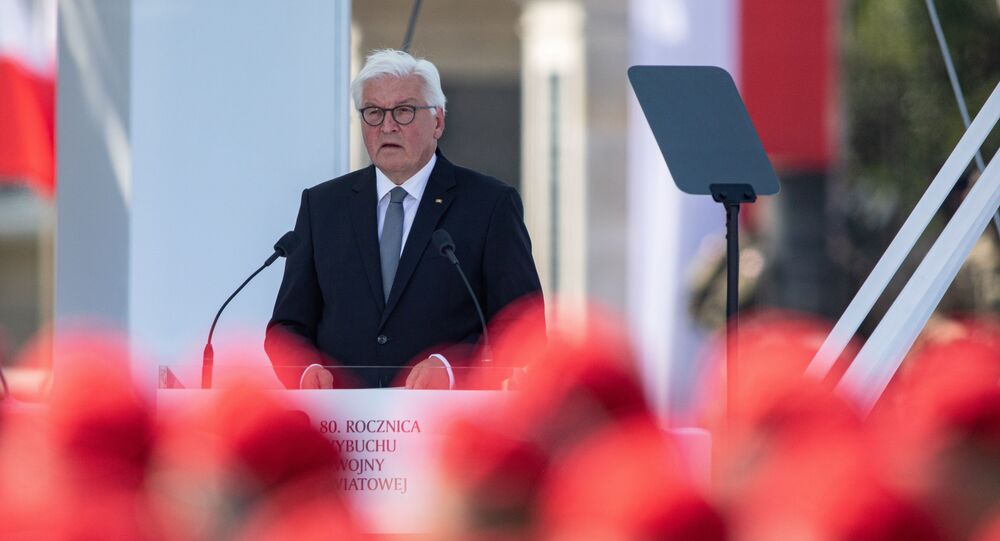 Speaking at a ceremony in the Polish city of Wielun earlier on Sunday, German President Frank-Walter Steinmeier asked for Poland's forgiveness, saying that he bows his head “before the victims of the attack on Wielun,” where the first World War II bombs fell 80 years ago.

Speaking at a ceremony to commemorate the 80th anniversary of the beginning of the Second World War in Warsaw on Sunday, German President Frank-Walter Steinmeier specifically focused on his compatriots’ responsibility for Europe’s security and welfare.

“A united Europe is a life-saving idea, a lesson from centuries of war, devastation, hostility and hatred. A united Europe puts its stake on the power of humanism and enlightenment, freedom and law, the wealth of languages ​​and cultures. This Europe remains a project of hope,” Steinmeier said.

He added that he knows that his country holds “special responsibility for this Europe” and that Germans must do more for it because their country, despite its history, “was able to grow into a new force in Europe.”

“We should contribute more in the European security and well-being of Europe, as well as heed other countries’ views in the name of European unity. We Germans want to accept this responsibility,” Steinmeier said, adding that the German people “have no reason to consider themselves the best Europeans.”

He pointed out that Germany’s responsibility also applies to its transatlantic partnership with the US, urging his compatriots “not to forget what made us stronger on this and that side of the Atlantic.”

“Europe must be stronger and more independent, but we know that it cannot be stronger without America. Europe needs partners, and I am sure that America also needs them in this world,” Steinmeier concluded, calling on all those present to “take care of this partnership.”

Earlier on Sunday, Steinmeier asked for Poland's forgiveness during a ceremony in the Polish city of Wielun, where the first World War II bombs fell 80 years ago.

He spoke as representatives of about 40 states attended the Sunday ceremony, including Polish President Andrzej Duda, US Vice President Mike Pence and German Chancellor Angela Merkel.

Russian President Vladimir Putin has been not invited, with Polish Deputy Foreign Minister Szymon Szynkowski vel Sek claiming that Russia was not interested in paying tribute to the event “in the spirit of historical truth.”

Kremlin spokesman Dmitry Peskov responded by emphasising that any commemorative events related to the start of World War II cannot be considered meaningful without Russia’s participation, given the country’s tremendous contribution to the Allied effort to defeat Nazism.

In a statement commemorating the anniversary of the beginning of World War II on Sunday, the Russian Foreign Ministry underscored the Soviet Union’s decisive role in the conflict.

“There are various ways to assess Soviet diplomatic efforts during the initial stages of the Second World War, but it cannot be denied that it was namely the Soviet Union which defeated Nazism, liberated Europe and saved European democracy from annihilation,” the Ministry noted.

About 600,000 Soviet troops were killed during the liberation of Poland from Nazi occupation between 1944 and 1945. During the course of the war, up to 80 percent of the military resources of the Third Reich were tied up in the fight against the Red Army.