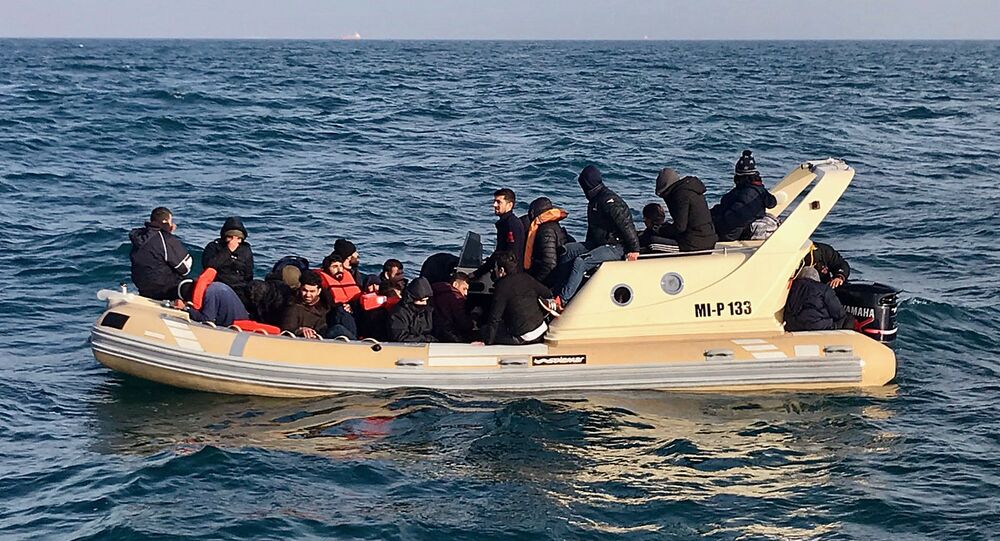 The development comes just a week after Prime Minister Boris Johnson pledged to send migrants crossing the English Channel back to their place of origin. He also said that the UK "should not be regarded as a place where you can automatically come and break the law by seeking to arrive illegally."

Over 50 migrants have reportedly been intercepted attempting to make the potentially perilous journey across the English Channel to the town of Dover.

The British Border Force are said to have picked the migrants up in four separate incidents with the assistance of local police and ambulance services, in what marks the latest in a series of similar incidents around England’s southeast coast over the past few months.

Around 50 migrants have been picked up in Dover, 4 separate incidents.
Check them out, I count 8 in the video, all 8 seem to be male & there's no children. Reckon the other 42 will be too?
Send them back, we don't want people here who leave women & children to die. pic.twitter.com/wMzIimRN3K

Reports say that on the morning of August 31, around eight individuals approached the English coast in a dinghy and were subsequently picked up by the coastguard. Then, later on, another group of 14 suspected migrants were brought ashore by the Border Force. Then, later on Saturday morning, two rubber dinghies containing another 34 migrants were intercepted and brought ashore, allegedly including five children.

More than 50 migrants arrived on Kent beaches this morning bringing the number who have successfully crossed the channel into Britain to over 1,000 so far this year. Why do all these migrants feel the need to escape from France? https://t.co/CVcKwTHpel

​Later on Saturday afternoon, a fifth rubber dinghy was reportedly discovered approaching the coast, but the number of those aboard is so far unknown.

While the nationalities of the migrants are yet to be made public, in many of the recent incidents a great deal of those detained have claimed to be Iranian.

If they are NOT RETURNED, the UK is encouraging the people traffickers just like the EU NGO . They must be returned to stop the flow and reduce the loss of life. They must return to France . Allowing them to stay is just making the traffickers rub their hands together with greed.

A spokeswoman for the Maritime and Coastguard Agency has been quoted as saying that, “HM Coastguard has been co-ordinating a search and rescue response to a number of incidents on the Kent coast, working with Border Force, Kent Police and other partners.”

“Rescuing those in trouble and bringing them safely back to shore, where they will be handed over to the relevant partner emergency services or authorities,” the spokeswoman added.

Why are they risking their lives in crossing the channel and not applying for asylum in those safe countries they reach first? Your own statistics prove they are more likely to be granted asylum in Germany or France, so why travel further to the UK, if not for the benefits?

The developments come amid a dizzying increase in the number of migrants attempting to make the risk-fraught journey from mainland Europe to UK shores. The incidents have now become so frequent that the UK Home Secretary, Priti Patel, recently met with her French counterpart, Christophe Castaner, in Paris where reports say that the two agreed that the British and French authorities need to cooperate to crack down on the number of migrants crossing the English Channel. On Friday, Miss Patel also announced that measures were being drawn up to “immediately” deal with the problem.

In a separate incident this week, on Tuesday, a mother and her child were said to be among another vessel carrying around 30 migrants that was headed for British shores. That incident came despite a recent warning by Prime Minister Boris Johnson who called for migrants not to risk the perilous journey because “we [the UK government] will send you back.”

“We will send you back. The UK should not be regarded as a place where you can automatically come and break the law by seeking to arrive illegally,” the Prime Minister declared.

"We will send you back...if you come illegally, you are an illegal migrant and I’m afraid the law will treat you as such."
Boris Johnson warned illegal migrants who sail across the English Channel to the UK they will be "sent back"https://t.co/rkUOx1VcdR pic.twitter.com/lD4rTN6V4p

Mr Johnson’s announcement was made following another hectic day for migrant arrivals on Thursday August 22, when reports said that a total of 37 people tried to cross the English Channel in rubber boats.

The influx of migrants crossing the English Channel is a relatively new challenge for the UK border force that only began to spike from mid 2018 onwards. Yet, in these times of increasing refugee movement and displacement - which are, according to the UN, at the highest number on record - the large-scale migrants crossings are apparently gradually becoming the new norm.

In 2013 when Australia faced the same problem Britain now has in the Channel, they launched Operation Sovereign Borders with a policy of turning the boats around combined with a huge comms campaign to deter future immigrants from making the perilous journey. The right approach!