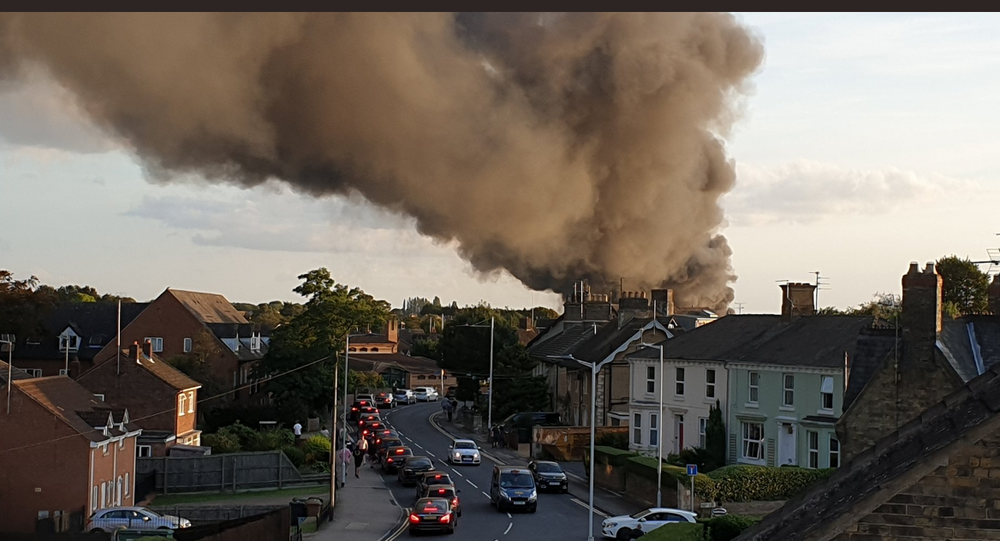 The city of Peterborough was shocked by an explosion and major fire which enveloped a Hotpoint warehouse on Thursday evening.

Fire crews have reported that 40 trailers carrying parts for washing machines and fridges were set alight.

Hotpoint is an American and European brand of domestic appliances owned by US company Whirlpool and China's Haier. Whirlpool confirmed that the area of the fire is where heavy goods vehicles are parked.

The police are preventing the public from entering the site, including the director of Whirlpool.

Fire virtually out at Hotpoint/now. Police did not even let the managing director whirlpool into the site. #peterborough #pboro #hotpoint @peterboroughmat @PeterboroughPES pic.twitter.com/xKkCWIdGKc

​Camrbidgeshire police described the incident as "serious" and are warning people to keep their windows and doors shut to prevent smoke entering their homes.

A bit more information about the #fire at #Hotpoint in #Woodston #Peterborough.

Please RT to let as many local people know - advice is to stay out of the area and keep doors and windows closed. pic.twitter.com/ZHIYRxr8cJ

The fire is said to be producing 'toxic smoke' and can be seen miles away. Photographs of the fire shows thick dark smoke rising behind houses and filling the air.

The fire in Peterborough is said to be producing toxic smoke. Close your windows if you are near!

Fire, ambulance and police teams are confirmed to be on scene in Woodston to put out the fire.

Our thoughts tonight are with the brave fire crews tackling this terrible blaze in Peterborough. We owe so much to the emergency services ⁦@LisaForbes_⁩ ⁦@KarenLeeMP⁩ ⁦@fbunational⁩ https://t.co/zOca2yHqsI

Cambridgeshire Fire and Rescue Service have said that a large team of firefighters and 9 engines are currently fighting the blaze.

8 crews are currently in attendance at the fire. More photos from the scene 📸 pic.twitter.com/mxidRtSixw

A spokesperson told Cambridgeshire Live: "It’s big incident at Hotpoint warehouse, Shrewsbury Avenue in Peterborough. We are firefighting. We have 50 on the scene, and about 9 engines. We are on top of it, we are controlling the fire, we hope to have it extinguished in the next few hours."

Witnesses near the area posted video footage and images of the hellish scene online.

The spokesperson confirmed: "Temporary road closures have been put in place in Shrewsbury Avenue, Morley Way and Celta Road up to the junction with the A15. The A15 remains open.

Huge fire in Peterborough. Anyone know what the cause is? pic.twitter.com/lqCkig5q4t

Huge fire in Peterborough. Anyone know what the cause is? pic.twitter.com/lqCkig5q4t

Massive fire in Peterborough - could hear the bangs as if there’s explosions. This is the view from Orton. pic.twitter.com/4gGUtxkgxB

The Cambridge Fire Brigades Union reported that the city itself is filled with smoke.

Huge fire in #Peterborough involving multiple lorries with explosions heard from far afield.#Firefighters are grafting tirelessly to bring under control, with resources stretched to the limit across the county as a result.https://t.co/28VLQqKYLC

The view from Hampton Vale of fire in Peterborough. @peterboroughtel pic.twitter.com/hN3aoZlYby

Some onlookers said the entirety of the city is witness to the smoke and described the blaze as a "mad fire".

Whole of Peterborough can see this not even bantering ahahaa mad fire pic.twitter.com/kP5KJ6qMLs