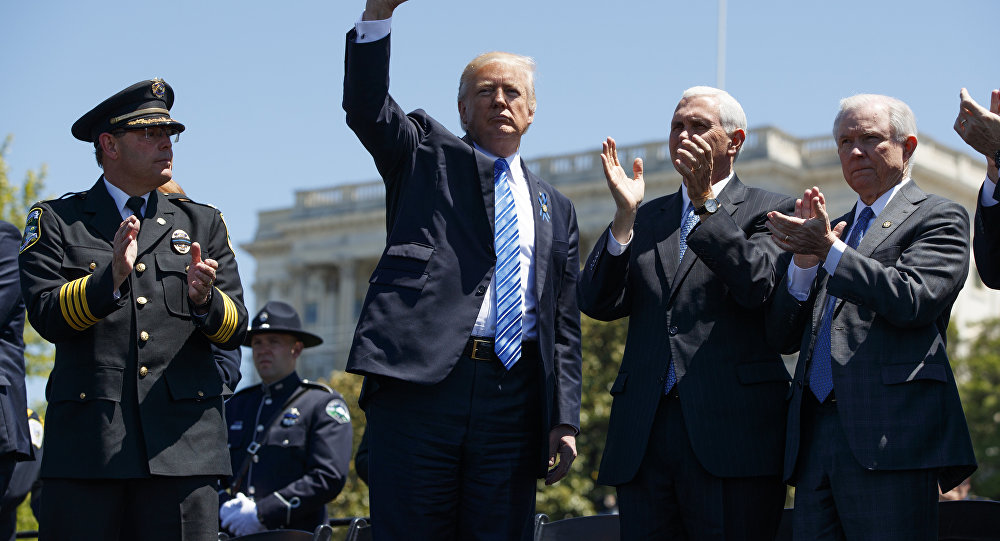 Some people in Slovenia, the home country of US first lady Melania Trump, just can’t get enough of their connection to the presidential family. In addition to the infamous wooden ‘scarecrow’ statue of the US president’s third wife, there is now a comparably eyebrow-raising statue of husband Donald.

A 25-foot-tall Donald Trump statue made of wood planks has been erected in the village of Sela pri Kamniku, not far from Ljubljana, the Washington Post reported on Wednesday. Created in a simplistic style not unlike that of Minecraft, the statue depicts the US president wearing a blue suit and his trademark red tie, with one hand raised with a clenched fist. The report compares the statue with a Christmas nutcracker or a presidential Pez dispenser.

​The creator, who remains anonymous, told a local television station that the statue is a work in progress and is meant to display Trump as Superman or, alternately, the Statue of Liberty. The statue was deliberately created for “provocation, because the world is full of populism.”

Igor Omerza, a former member of the Slovenian parliament and an author who has written about Melania, detailed that the new statue could be interpreted in many ways, either as “the raised hand of Lady Liberty or the iron fist of a populist dictator,” according to The Washington Post.

“Trump is always in the news,” Omerza said, adding that he does not “believe the young people in this village who built this are in favor of him.”

Whatever the case, the statue will surely become a tourist attraction, particularly as the owner of the land on which the Melania scarecrow statue was erected has warned that he will take that effigy down at some point, according to the Post.

News last week of the unveiling of a life-size wooden sculpture of U.S. first lady Melania Trump near her hometown of Sevnica in Slovenia. @reuterspictures Borut Zivulovic captured the statue: pic.twitter.com/7ORXp3pXMw