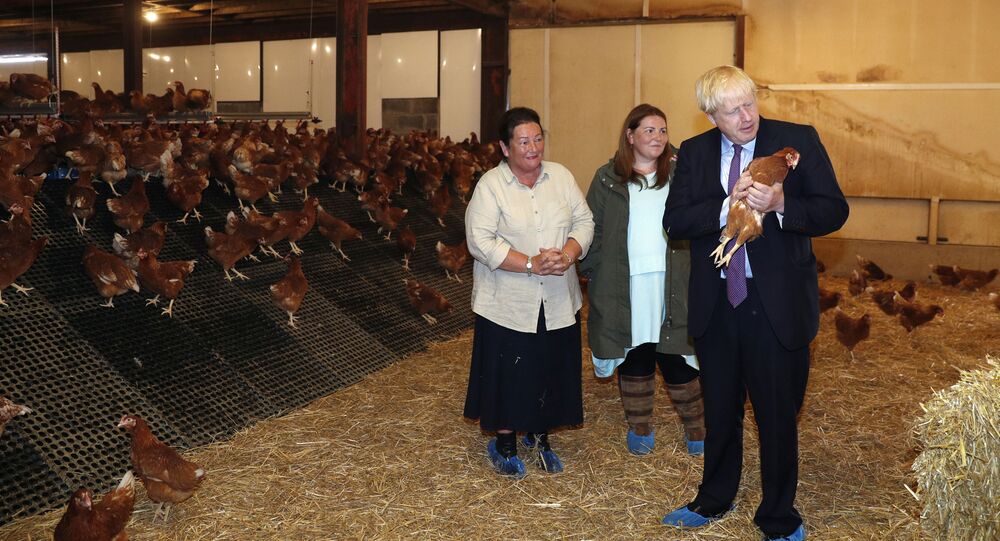 LONDON (Sputnik) - Orderly trading relationships should be the first priority for the UK government to safeguard the national agricultural market from being flooded by low-quality foreign products, because such flows would easily negate effects of any additional investment for UK farmers amid the Brexit fallout, Tom Keen, the EU exit and international trade adviser for the National Farmers’ Union (NFU), said.

In a Tuesday report, UK consultative company The Andersons Centre warned that national farming profitability would drop by 18 percent in the event of a no-deal withdrawal, claiming that the best policy was to secure a concrete arrangement with the bloc, which remains the country's largest market for agriculture. The report also called for more clarity on what government assistance farmers could hope to receive.

Commenting on the report, Keen noted that since Prime Minister Boris Johnson, during his visit to a farm in Wales in late July, promised farmers that they would get the support they need, little clarity on the measures of assistance has been provided.

"We've been thinking about what that [promises] will mean in terms of a package or regulations that could help the industry …There's no set figure on it, and you can say ‘you'll get the support you'll need’ but farmers will want to know what that means. But I can't really overstress the point that the best way to avoid a no deal and the repercussions is to have a deal in place to begin with," Keen said.

He clarified that the lack of a trade policy that would prevent lower-quality products from entering the country and undermining the national producers would simply make futile any extra assistance to the sector.

"You have to have your trading relationship sorted and stable first. It's all very well having a policy to help farmers invest, which is what we want to see, but if you have a trade policy that means products of a lower standard and are far more competitive enter the UK market, well that undermines any farm policy you might have," Keen argued.

Doing otherwise, the NFU adviser warned, would be putting the cart before the horse.

"You have to get your trading relationship sorted first, and know what that will be, as it has such an effect on farmers' incomes," he reiterated.

The UK farm sector concerns are on the rise as the UK government is determined to take the country out of the bloc by October 31 without any "ifs and buts."

Although the government has assured farmers that support will be forthcoming to cover existing subsidies earned via the EU's Common Agricultural Policy (CAP), concerns remain as to the intrusion of particularly US-made products that may undercut existing EU standards.

Speaking on the BBC's Today Program on Wednesday, NFU President Minette Batters claimed there was a risk US producers might "outcompete" their UK counterparts if such standards were changed, saying UK farmers needed further assurances from the government.

Pro-Brexit politicians are however adamant that withdrawing from the CAP may provide a boon to UK agriculture. Speaking on Thursday, UK Independence Party leader Richard Braine claimed such a move could spark an upsurge indirect investment in farming in the country, with massive funds otherwise funnelled into the CAP kept at home for domestic development.