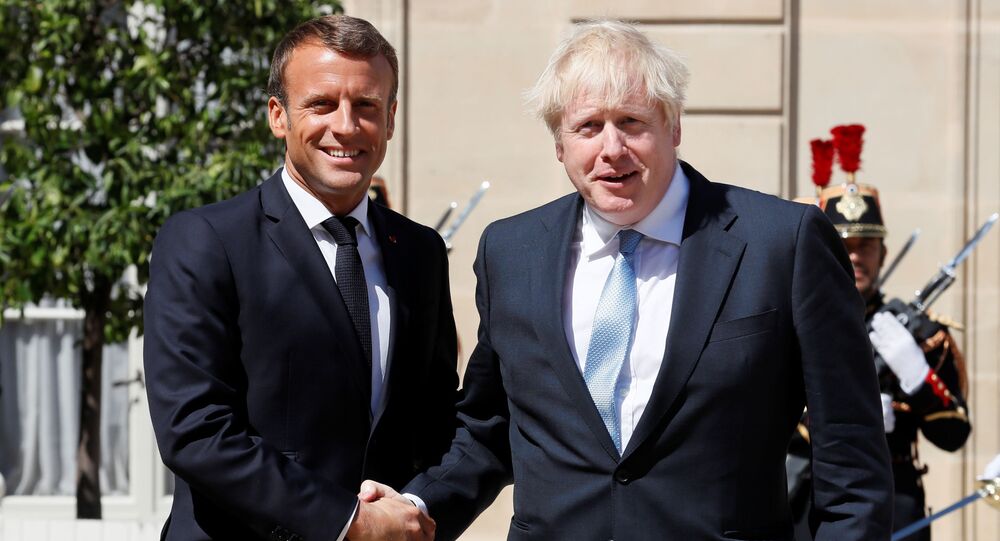 Boris Johnson is currently touring Europe for the first time since becoming UK Prime Minister. He has already visited Germany where he held talks with Angela Merkel and is currently in France to meet with President Macron. Both visits aim to address the most pressing Brexit issues.

The backstop agreed in the Brexit deal is a guarantee of stability in Ireland and not simply a technical mechanism, said French President Emmanuel Macron, standing alongside UK Prime Minister Boris Johnson outside the Elysee Palace.

Touching upon the Brexit 31 October deadline, the French president said that nobody was ready to wait that long, demanding visible progress on the backstop issue within 30 days.

"What Chancellor Merkel said yesterday, and which is in line with the substance of our talks, is that we need visibility in 30 days", Macron told reporters standing alongside Johnson. "Nobody will wait until October 31 without trying to find a good solution," Macron added.

The French leader said that he respected the UK decision to withdraw from the EU, while adding that his position would always be to protect the European project.

Addressing the possibility of a no-deal scenario, Macron said that such an eventuality was never the bloc's choice. But he said that it was the EU's duty to be ready for it.

Macron also stressed that there cannot be any alterations to the withdrawal agreement.

Johnson said that the UK would not set up border checks between the Irish Republic and Northern Ireland under any circumstances.

"When you look at the border with Northern Ireland ... under no circumstances will the UK government be instituting, imposing, checks or controls of any kind at that border. We think there are ways of protecting the integrity of the single market and allowing the UK to exit from the EU, all and entire and perfect as it were", - Johnson said.

According to Johnson, the two sides have sufficient time to work on an alternative solution to the border issue.

"Let’s get Brexit done, let’s get it done sensibly and pragmatically and in the interests of both sides and let’s not wait until October 31. Let's get on now in deepening and intensifying the friendship and partnership between us", Prime Minister stated.

The UK Prime Minister believes that Britain can exit the EU without disrupting the integrity of the single market.

Referring to his meeting with Merkel, Johnson reiterated his belief that a solution to the backstop issue could be found within 30 days.

"It was very interesting to hear some of positive noises that we're now hearing about the ways that can be done. We look forward to developing those thoughts in the next few weeks. [Merkel] said if we can do this in two years then we can do this in 30 days and I admire that 'can-do' spirit that she seemed to have and I think she is right. I think that the technical solutions are readily available and they have been discussed at great length", according to Johnson.

Boris Johnson embarked on his first official trip as UK Prime Minister on Wednesday. The UK prime minister is seeking alternative customs arrangements at the Irish border: however EU leaders repeatedly stressed that they do not want changes to the existing Brexit deal.