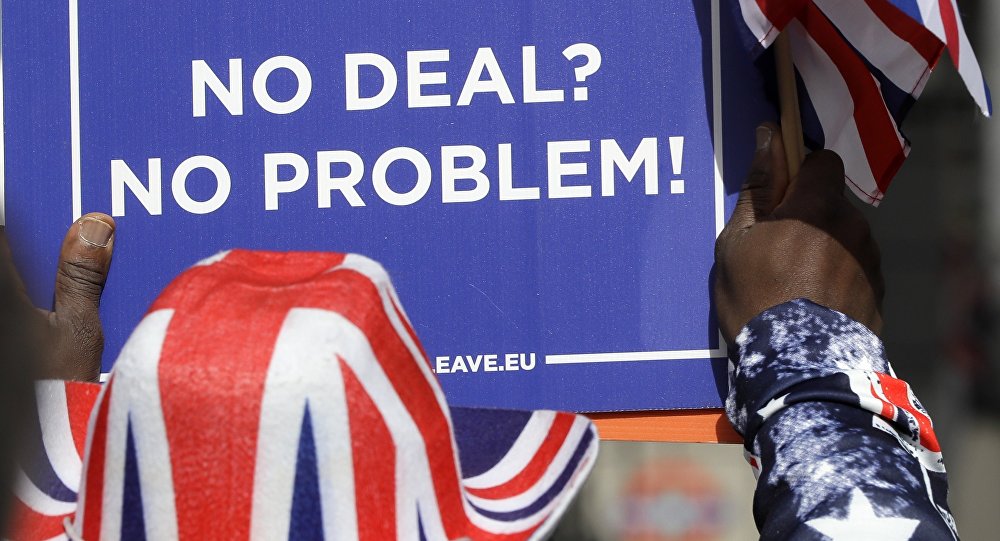 Boris Johnson arrived to Germany on Wednesday for his first foreign trip since becoming British prime minister, where British PM and German Chancellor Angela Merkel discussed the possibility of Britain’s negotiated departure from the EU, despite stalemate over Irish backstop solution.

France’s president Emmanuel Macron on Wednesday dismissed demands from British prime minister Boris Johnson to renegotiate current Brexit deal, arguing that it was “not an option” due to Johnson’s position on the Irish backstop, the AFP reported.

"Renegotiation of the terms currently proposed by the British is not an option that exists, and that has always been made clear by [EU] President Tusk," - Emmanuel Macron told reporters in Paris.

The president also argued that “no-deal” situation would be Britain’s fault and any trade deal negotiated between London and Washington would not make up for the costs of leaving the EU.

"Can [the cost of a hard Brexit] be offset by the United States of America? No. And even if it was a strategic choice it would be at the cost of an historic vassalisation of Britain,"- noted Macron according to Reuters, - "I don't think this is what Boris Johnson wants. I don't think it is what the British people want.”

Macron also commented on the previously expressed idea to grant London a Brexit extension, by saying that there is “no reason” for this if “no big change” in political situation such as an election or referendum is foreseen.

The reports by AFP previously cited an anonymous official in Macron’s office who argued that “no-deal” Brexit was the “most likely” scenario for Britain leaving the European Union on 31 October amid Boris Johnson’s position on Irish backstop, but the EU would probably be willing to grant Britain a delay on Brexit in order to hold new elections.

"The scenario that is becoming the most likely is one of no deal," – said an official who preferred to stay anonymous, AFP reported.

"If the United Kingdom considers that having a backstop is absolutely excluded, that is its right, but in that case it limits the possibility of reaching an agreement," said the official.

The official also refuted Johnson’s claim that in the case of a “no-deal” Britain would be exempt from a divorce bill of £39 billion that had already been negotiated.

"The idea of saying 'there's not a deal, so I won't pay' does not work," said the official. "We cannot imagine that a country like the UK would back out of an international commitment."

The official also noted that the EU position on Brexit will not change, and that Britain should have no doubt that France, Germany and other countries are “totally united” in their stance, which would not change even under pressure from US President Donald Trump.

The statements come a day before Boris Johnson holds his first direct meeting with Macron since becoming prime minister.

Boris Johnson arrived to Germany on Wednesday, 21 August for an official meeting with Chancellor Angela Merkel, where discussion on re-negotiations of Brexit deal previously struck by his predecessor Theresa May became the central topic, with British PM insisting that the UK “cannot accept” the current terms of Brexit agreement as it is and would rather leave the EU without a deal in place, if the agreement is not renegotiated.

"Clearly we cannot accept the current withdrawal agreement, arrangements which either divide the UK or lock us into the regulatory and trading arrangements of the EU... without the UK having any say on those matters," he said in Berlin, in an effort to convince his German counterpart to remove the Irish backstop option.

The Irish backstop solution remains a stumbling-stone in negotiations between Britain and the European Union as Boris Jonson sees it as “anti-democratic” and “inconsistent with the sovereignty of the UK as a state” – a position he recently expressed in a four-page letter to EU Council President Donald Tusk.

However, German officials have said that the Irish backstop cannot be re-negotiated.

"There cannot and will not be new negotiations. It is completely impossible that the backstop will be removed from the agreement or softened," said Florian Hahn, European policy spokesperson for Merkel's governing Christian Democratic Union (CDU) party.

The United Kingdom voted to leave the European Union in 2016, but the exact departure terms of the bloc's second largest economy have yet to be finalised.