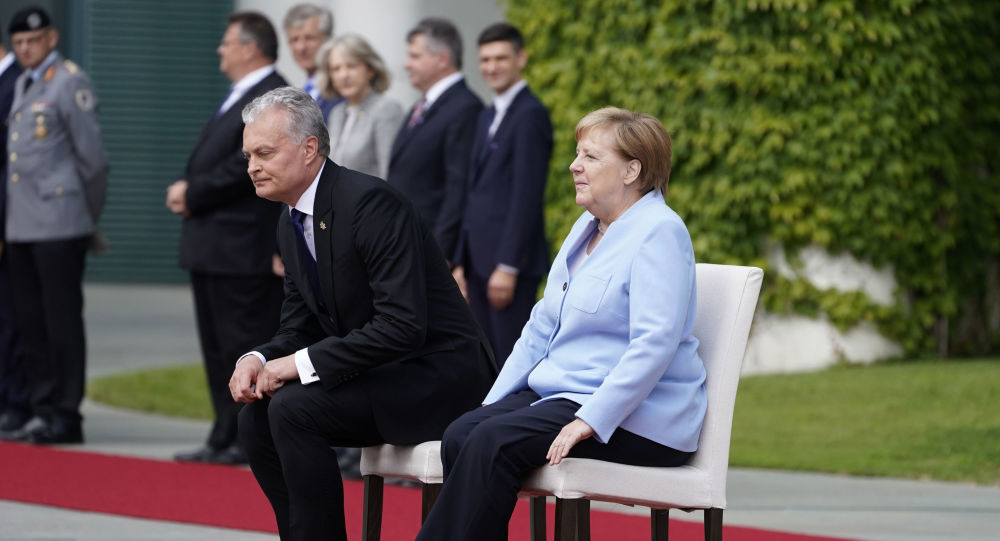 The 65-year-old German Chancellor suffered a series of shaking incidents in June and July, raising widespread concerns for her health. Germany’s long-standing leader has since downplayed the trembling bouts, but she continues to break with protocol by opting to remain seated during public events.

German Chancellor Angela Merkel sat down alongside Gitanas Nauseda as she welcomed the Lithuanian president to Berlin on Wednesday.

During a reception with military honours for Nauseda at the Chancellery, Merkel was filmed sitting through the German national anthem.

German officials are yet to comment on why the chancellor opted to breach protocol in this way.

This is the third time Merkel has sat during an official visit of a foreign head of state, following meetings with Maia Sandu and Mette Frederiksen, prime ministers of Moldova and Denmark respectively, in July.

The ‘sit-throughs’ followed three occasions when the chancellor was visually trembling in public.

She first shook uncontrollably in June during a welcoming ceremony for Ukraine’s new president, Volodymyr Zelensky. The chancellor blamed that shaking spell on intense heat and dehydration.

She was seen trembling again later that month during an indoor event with German President Frank-Walter Steinmeier – that time, her aides said it was a “psychological process,” as Merkel tried to avoid a repeat of the first incident.

The veteran politician – who will not seek re-election in 2021 – then trembled a third time in July as she welcome Finland’s prime minister Antti Rinne.

She addressed concerns for her health on Tuesday in her first post-holiday appearance at a reader forum in the northeastern German town of Stralsund.

“I do understand that people have these questions, and that some of them worry,” she said, as quoted by Der Spiegel. “That's why I have a duty to assess whether I can fulfil my tasks well, or whether something is affecting me so much that I perhaps can't.”