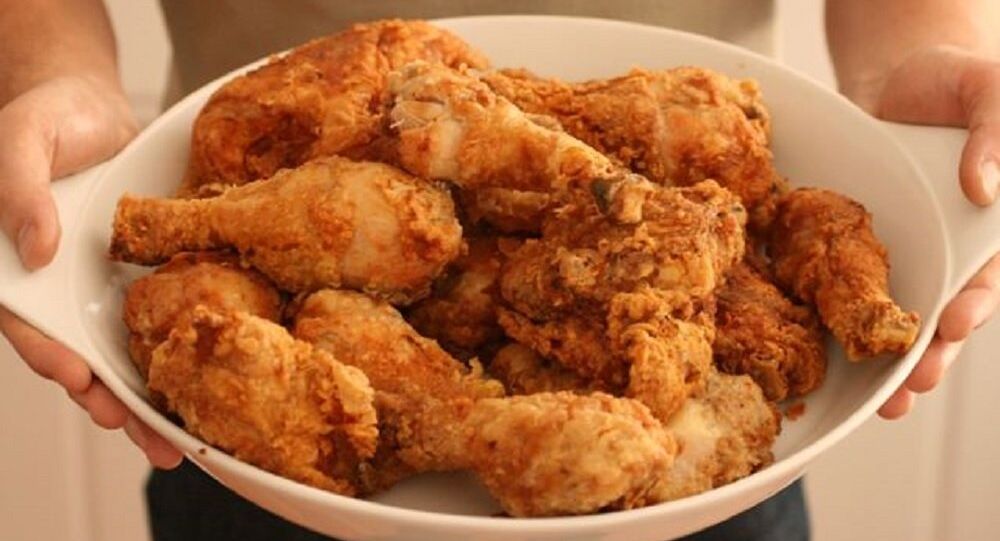 The campaign is said to be inspired by the rise of gangs recruiting kids in chicken shops to deal drugs – they surveil schoolchildren who meet in outlets, then approach them with offers of ‘free’ food. They’re then asked to carry out tasks such as keeping lookout during drug deals, before being given increasingly criminal responsibilities.

The Home Office has launched a controversial campaign, in which warnings about the dangers of carrying a knife have been printed on takeaway packaging at the UK’s most popular fried chicken emporia.

Around 320,000 boxes have been sent to over 200 outlets across England and Wales under Whitehall’s new ‘#knifefree’ initiative – the interior of the packaging features true stories of young people who gave up lives of violent street crime to pursue positive activities, such as boxing or music.

We are rolling out our #KnifeFree chicken boxes in over 210 chicken shops in England and Wales, including Morley’s, Dixy Chicken and Chicken Cottage. They use real life stories to show people how they can go #KnifeFree. pic.twitter.com/vrG4WWa56v

London Grid for Learning, which offers child support services, launched its own campaign on the issue in July - “There’s no such thing as free chicken” - to highlight the dangers of chicken-shop grooming.

"It doesn’t need to be an expensive pair of trainers – if a cousin of a friend or a friend of a friend is buying you fast food or small gifts, they might just be nice…or they may expect you to return the ‘debt’ you don’t know you are building up. This can happen faster than you think. If something has happened though, it’s not your fault. Talk to a teacher, a parent/carer, the police, Childline or The Mix. If someone is blackmailing you they will tell you there’s no way out, but there is," the organisation said in a press release.

"No such thing as free chicken" Why? #chickenshopgrooming

Download this new A3 #safeguarding poster with a really simple message worth students understanding.

​While evidently an issue of some concern to several organisations however, the Home Office's new venture has provoked much criticism on social media, with many users suggesting there are racial overtones to the enterprise.

Instead of investing in a public health approach to violent crime, the Home Office have opted for yet another crude, offensive and probably expensive campaign. They would do better to invest in our communities not demonise them. https://t.co/dGZBo3IypV

Is this some kind of joke?! Why have you chosen chicken shops? What's next, #KnifeFree watermelons? https://t.co/34DwwxSmCN

Honest to god if the best idea you have to tackle knife crime is to write stuff on fried chicken you should quit power forever in embarrassment, not tweet it out proudly like you’ve just solved world hunger you ridiculous sack of used dicks.

Throw in some Golliwoggs as free gifts and this might just work. A free golliwogg & watermelon for every good boy who does what massa says. You guys are a disgrace. Operation Hostile lives on.

​Data indicates there were 43,516 knife crime offences in England and Wales in the 12 months ending March 2019, an 80 percent increase in five years, and the highest number since comparable data was compiled. Out of 44 police forces across the two countries, 43 recorded a rise in knife crime since 2011. A government report issued July 2019 also estimated over 17,500 boys aged-14 carry a knife or weapon in England and Wales.