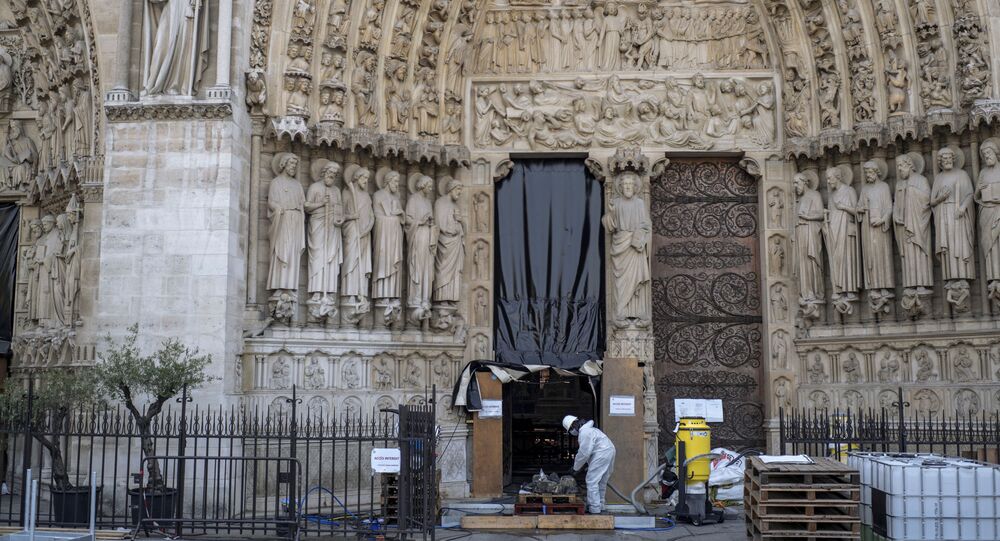 Though Notre Dame de Paris is currently closed off for lead decontamination, additional concerns for the cathedral were raised after France’s Ministry of Culture reported the church is still at risk of collapsing.

The Ministry of Culture announced on Wednesday that additional stonework had fallen from the Notre Dame cathedral’s nave vaults during the recent heatwave that ravaged the French capital.

Late last month, Sputnik reported that chief architect Philippe Villeneuve predicted the fragile holy building would be impacted by the heatwave because it was still saturated with water from April 15 firefighting efforts.

“I am very worried about the heat wave,” Villeneuve said on July 24. “What I fear is that the joints or the masonry, as they dry, lose their coherence, their cohesion and their structural qualities.”

The Notre Dame de Paris’ restoration process has been put on the backburner since Paris Police Chief Michel Cadot ordered the Regional Directorate of Cultural Affairs to halt all efforts on July 25 and not proceed until the grounds were properly decontaminated of lead.

"It is only the urgency linked to the persistent risk of a collapse that justifies the rhythm of work undertaken," claimed the ministry Wednesday.

Prior to the closing, national and local officials received backlash from the public, and even some lawmakers, who perceived the restoration process as being rushed and ignoring the varying readings of lead contamination around the building.

President Emmanuel Macron initially called for the cathedral’s restoration to conclude within five years, but his ambition may not become reality due to the lead delays and additional damage.

"The first restoration works will not take place - at the very earliest - before the first half of 2020," the ministry’s Wednesday statement noted, adding that they “have made the health of the workers the absolute priority, above all other consideration.”

Even with Notre Dame de Paris’ closing, environmental groups and a key labor union are urging officials to take further precautions to protect the immediate surrounding public from the potentially harmful lead debris.

“The 440 tonnes of lead that went up in smoke during the fire represent more than four times the annual lead emissions in the atmosphere for all of France,” Association Henri Pézerat spokeswoman and researcher Annie Thébaud-Mony told reporters on August 5.