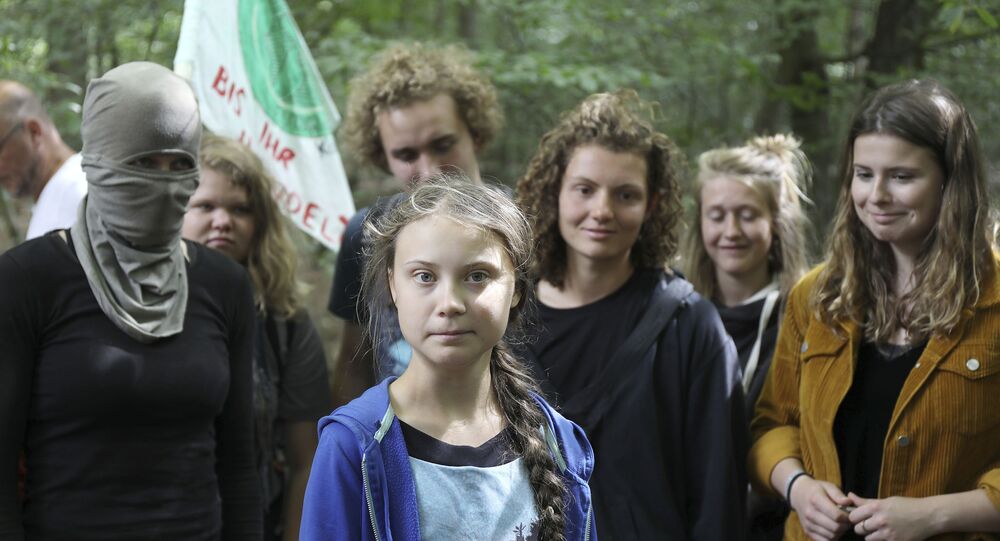 The poster girl from Sweden of the global climate movement has dropped by the renowned Hambach Forest in an industrial area of northern Germany before her trip to the UN headquarters in New York. However, at least one of her guides has made some feel that something is not right about her visit.

Teenage climate activist Greta Thunberg’s surprise visit to the lignite mining area in North Rhine-Westphalia, where she met with activists against deforestation, has prompted a controversial reaction, Bild reports. Photos and videos from the meeting show that at least one of the women, accompanying the 16-year-old through the woods had covered her face with an olive green cloth, leaving only her eyes visible.

The spokeswoman for the German branch of the international student movement "Fridays for Future", 21-year-old Carla Reemtsma, told the German outlet that this woman is one of the squatters in the Hambach Forest who guided Greta through the woods.

“Most squatters in Hambach Forest cover their faces because they do not want to be recognised. They are also free to roll themselves up”, she noted.

However, lawmaker Gregor Golland, representing the Christian Democratic Union in the regional parliament of North Rhine-Westphalia, has raised concern over promoting this kind of activism.

"The photos show a frightening distance between moralising climate rescuers and violent masked extremists, those going against democracy. In a democratic society you show your face and stand by your opinion!" he told Bild.

The head of the regional police union, Michael Mertens, echoed his stance, noting that it “feels wrong to see Greta Thunberg, standing next to a masked person”.

“The protest in Hambach Forest was and is not driven by civil disobedience. Injuring police officers and RWE employees [the company, operating in the area], attacks, throwing stones or Molotov cocktails, as well as damaging property, are criminal offenses that must be prosecuted. It's a long way from the peaceful protests of the Fridays for Future movement", he noted.

Meanwhile, police in Aachen watching over the forest noted that they had seen the pictures, but declined to comment on it.

The German forest has remained an apple of discord between environmental activists and the German energy giant RWE, which operates the lignite pit there. It has accused the activists in the past disproportionate and criminal acts.

The activist insisted that they have the right to carry out civil disobedience. Greta Thunberg also supported their right to disobey during her visit to the Hambach Forest, noting that “civil disobedience is sometimes necessary if nothing else helps, if it is peaceful and no one gets hurt, or if nothing is damaged”.