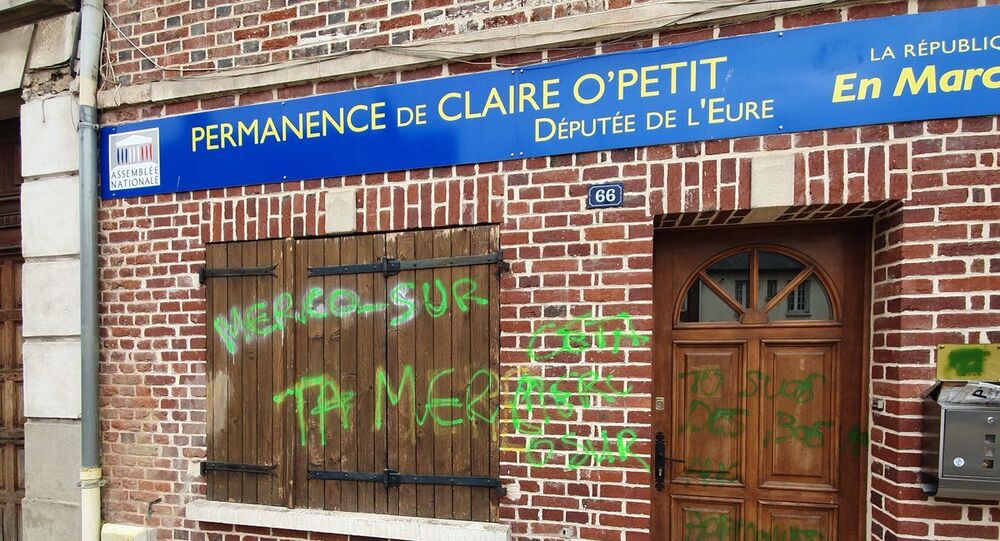 French Interior Minister Christophe Castaner has instructed police to increase security around the offices and homes of all lawmakers who voted in favour of the free-trade agreement between the EU and Canada after they complained their premises had been attacked by farmers.

"Some 144 lawmakers have had their offices walled or smashed up, received death threats or been verbally abused", O'Petit claimed, however, warning that they "will never yield to such threats".

The 69-year-old asserted that her car had been "smashed" and her offices had been vandalised as well, adding that she "sometimes felt in danger".

In the past few weeks, French farmers have been protesting against the so-called Comprehensive Economic and Trade Agreement (CETA) that is designed to remove tariffs on basically all goods and services between Canada and the EU.

As many farmers have complained that the free-trade pact would bring unfair competition to them, some of them even took to the streets, damaging dozens of offices belonging to lawmakers from Macron's party who voted for the agreement.

On Thursday, LREM lawmaker Sacha Houlié tweeted that he was "appalled by the graffiti that was put up last night in front of my office by the farmers"...

...while slightly over a week ago, a group of farmers dumped manure outside the office of lawmaker Monqiue Iborra:

The protests have caused French Interior Minister Christophe Castaner to order police to prop up security around the offices and homes of the lawmakers.

CETA has been in force provisionally since September 2017, but it was approved by the French Parliament only last month by a vote of 266 to 213, thus completing Paris' ratification of the accord that was negotiated by the European Union. Some 52 members of Macron’s party abstained and nine voted against.

The decision set off anti-government protests as opponents to the deal allege that the pact subverts the EU's economic and social regulations by importing goods made under conditions that would not be allowed in Europe.