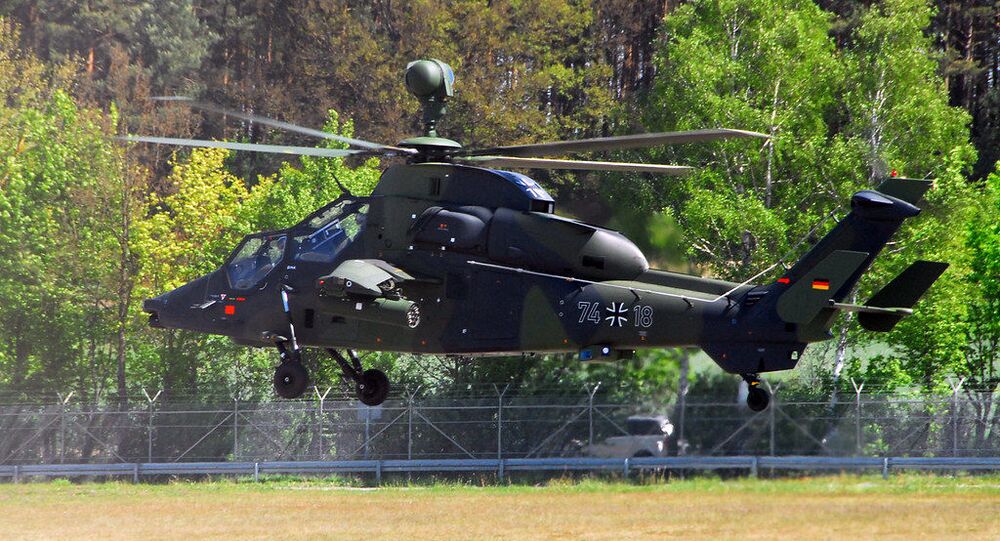 Earlier this week, Hans-Peter Bartels, chief of the German parliament’s defence committee, said that the country’s navy is running out of combat vessels, while German air force chief of staff Ingo Gerhartz admitted that currently, “the Luftwaffe is at a low point”.

The German Armed Forces have temporarily suspended flight operations of all of its 53 “Tiger” helicopters due to technical faults found in their parts.

“Certain bolts that are installed in the helicopter could have a flaw”, the Army Press and Information Centre said in a statement, adding that before the resumption of flights, the machines must be "thoroughly checked and bolts replaced if necessary”.

“Security is the top priority for the Bundeswehr”, the statement pointed out, adding that an action plan will be discussed after the Air Safety Committee conducts an assessment of the situation on Friday.

The statement comes just a few days after Hans-Peter Bartels, chief of the German parliament’s defence committee, warned that the country’s navy is running seriously short of combat capable vessels.

Speaking to reporters on Tuesday, he said that the German Navy “has never been smaller than it is now” and that it currently has just eight frigates rather than the 15 stipulated by regulations.

Bartels’ remarks were preceded by those of Lt-Gen Ingo Gerhartz, the German air force chief of staff, who admitted that  “the Luftwaffe is [now] at a low point”, adding that “aircraft are grounded due to a lack of spare parts, or they aren’t even on site since they’re off for maintenance”.

He spoke as the German government acknowledged in a written answer to parliament that the country’s air force fails to meet NATO minimum training requirements of 180 hours of flight per year because it lacks enough working aircraft for its pilots to fly. Only 512 of the Luftwaffe’s 875 pilots were able to meet the NATO target last year, according to the government.

The developments are the latest in a series of mishaps for the Bundeswehr over the past few years. In 2018, German media cited the country’s Defence Ministry sources as saying that only 39 percent of heavy military equipment delivered to the German armed forces last year was fit to be immediately put into service.

Adding fuel to the fire was an incident with Angela Merkel’s plane in late November 2018, when an Airbus А340 dubbed the “Konrad Adenauer” lost all communications with the ground as it was flying over Netherlands towards the G20 summit in Argentina and was forced to return to Cologne. The Bundeswehr reportedly suspects sabotage and cyberattacks as a possible cause of malfunctions in the A340.