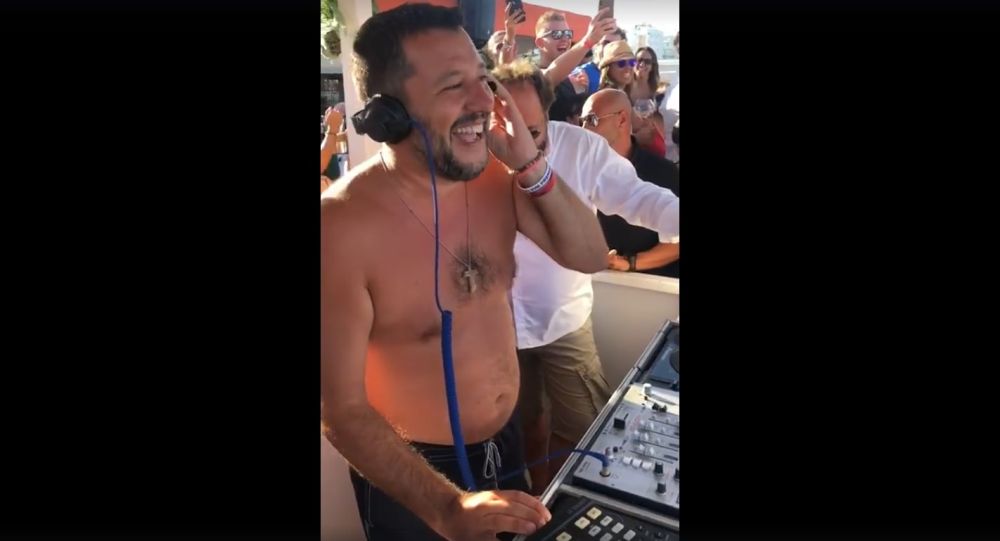 Italian Deputy Prime Minister Salvini has just shown the voters another side to his talent – and not everyone appears to be happy.

A shirtless Matteo Salvini was filmed DJing on a beach in Milano Marittima, a luxury resort on Italy’s northern Adriatic coast.
Wearing a headset and visibly joyful, Salvini, who also happens to be the interior minister and leader of Italy’s largest party, was surrounded by photographers while standing in a DJ booth, but it was only a short break from daily routine.

His Lega party did well in the European Parliament elections in May, but the ruling coalition with the Five Star movement has been suffering from growing differences. This week, Salvini will begin touring the southern regions of Abruzzo, Calabria, Molise and Puglia to try to swing voters to his side in case of a snap election.

According to La Repubblica, the national anthem sounded in Salvini’s honour in Milano Marittima.

Footage shows beachgoers singing along, with bikini-clad girls doing their part from podiums. After a few minutes, Salvini reportedly returned to his entourage in a reserved area of the beach bar.

Reactions to Salvini's performance have been mixed, with some feeling there was no problem with the official having fun, and others describing his beach antics as "excessive".

Former Italian minister Juliette Meadel quipped she would prefer that Salvini, who is currently embroiled in a corruption scandal, "control the turntable" rather than the government.

"If he changed his job and started DJing, he'd do less damage," a user wrote.

Another said: "Politically you can be for or against him, but an interior minister is in the end also a human being who likes to have fun like everyone else.

"For me he's great," wrote a commenter. "At least he's enjoying himself, some of his points and ideas are perfectly alright."

Being in this position doesn't mean you can't have fun. If you want to go to the beach and dance, no one forbids you. But this seems excessive to me since he also represents me and I didn't vote for him.

This is the second time Salvini guest-starred as a DJ, three years ago a clip emerged of him cutting loose at the same beach.