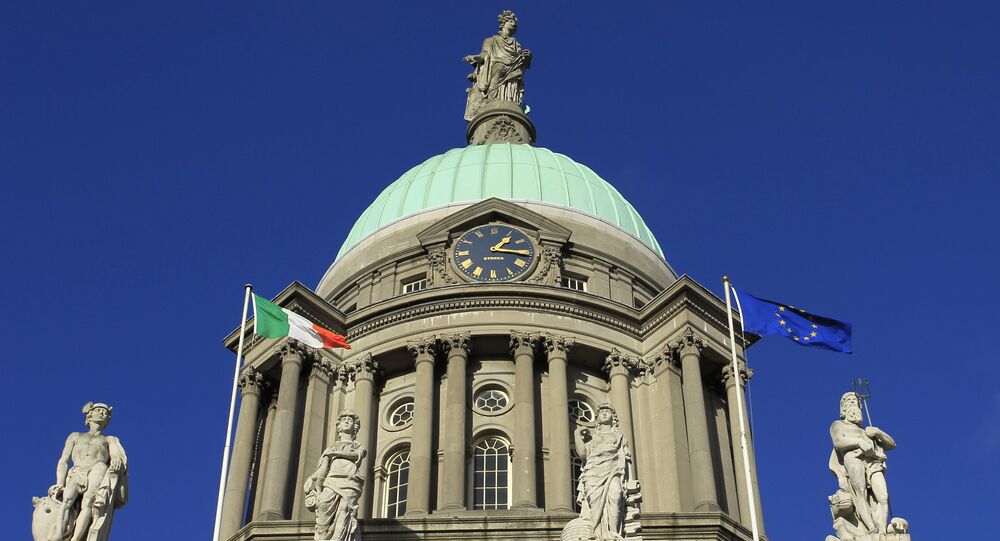 LONDON (Sputnik) - Threats within the US Congress to impede a US-UK trade deal if the backstop protocol to avoid a hard Irish border will not go into effect in case of a no-deal Brexit are seriously misguided, Hermann Kelly, president of the Irish Freedom Party in the Republic of Ireland, told Sputnik on Thursday.

The Friends of Ireland, a sizable cross-party caucus within Congress, said Wednesday they would move to scupper a future trade deal between London and Washington if physical checks were set up on the border between Northern Ireland and the Republic of Ireland.

Such a move would amount to being "conned" by pan-Irish pro-EU Sinn Fein, said Kelly, whose party was created last year to promote Ireland's EU exit. He argued that the backstop protocol itself was a mere means to keep the United Kingdom tied into a common customs framework with the European Union.

"The backfiring backstop is a euphemism to hide that it's about keeping the UK inside the EU's Customs Union and is therefore inherently undemocratic. The Irish in America have a history of being conned by the Marxist, anti-nationalist Sinn Fein, who have become a European Unionist party opposed to Irish sovereignty and independence", he argued.

The threat may however present further problems for new UK Prime Minister Boris Johnson, who has otherwise enjoyed the support of US President Donald Trump and the prospect of closer economic ties after Brexit.

The Friends of Ireland have made it clear they are willing to challenge Trump over any future deal if the backstop is not implemented, believing a change in the border's current status will place the 1998 Belfast Agreement at risk.

The possible implementation of a backstop protocol has exacerbated Brexit woes in the United Kingdom for some time, with lawmakers rejecting former Prime Minister Theresa May's exit plan no less than three times in part due to euroskeptic fears over remaining tied to the EU customs union.

Unionists, who want to keep Northern Ireland in the United Kingdom, and pro-Brexit Conservatives have at times also argued the backstop itself is a threat to the Belfast Agreement, believing it overrides the principle of consent upon which the peace deal was originally founded.

This was precisely the position of the Nobel Peace Prize winner and former first minister of Northern Ireland, David Trimble, who previously sought a judicial review over fears the backstop would undermine the status of Northern Ireland as a functional part of the UK's single market.

Such concerns are arguably not being taken seriously by Dublin, Eoin O'Malley, a professor of political science at Dublin City University, told Sputnik, given that a backstop protocol solely affecting Northern Ireland could give the impression that London was willing to distance itself from it.

"I don’t think many on the Irish side appreciate why and how Unionism perceives the backstop as a threat... so Trimble is right to suggest that the backstop threatens to change the nature of the relationship within the islands, and so could violate the [Belfast Agreement], but that said, so does Brexit", O'Malley said.

He noted that there were already many regulatory divergences between Northern Ireland and the rest of the United Kingdom but the controversial backstop, he stressed, would only signal that London was willing to cast Northern Ireland aside.