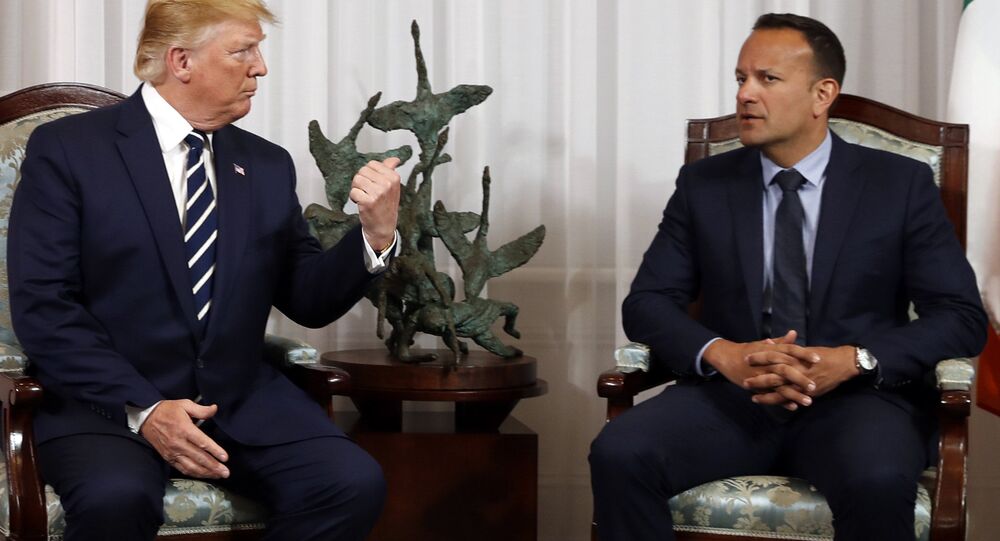 The news comes just days after UK prime minister Boris Johnson proposed a trade deal between the two countries, with US president Donald Trump stating that they could offer a “substantial" agreement that would boost trade multiple times.

Future trade deals between the UK and US are at risk of being blocked by US Congress if the Good Friday agreement is jeopardised by a no-deal Brexit, US officials said on Wednesday.

Potential trade deals between London and Washington could be threatened by backlash from Congress, with both Democrats and Republicans stating they would opose any trade deal with the UK if the Good Friday agreement 1998 was harmed by a hard border on the Irish island.

“The American dimension to the Good Friday agreement is indispensable,” Richard Neal [D-MA], chairman of the Friends of Ireland and House Ways and Means committee.

Exactly: it isn’t Trump who has power to give the UK a good trade deal, but US Congress. Millions of Irish-Americans can lobby Congress to cancel a good trade deal with the UK, IF no deal Brexit happens and the Good Friday Agreement broken (Backstop issues). We need a soft Brexit https://t.co/uup3YQonEM

“We oversee all trade agreements as part of our tax jurisdiction,” Mr Neal said in a phone interview. “I would have little enthusiasm for entertaining a bilateral trade agreement with the UK, if they were to jeopardise the agreement.”

Republican co-chair to the Friends of Ireland group, Pete King, said that that endangering the Irish border was a “needless provocation” and that his party would fight to challenge President Trump on the issue.

“I would think anyone who has a strong belief in Northern Ireland and the Good Friday agreement the open border would certainly be willing to go against the president,” Mr King said.

Thank you Congressman Richie Neal & his Chief of Staff William Tranghese true & great friends of Ireland
In February I presented Congressman Neal with a copy of my report ‘Northern Ireland Returning to Violence as a Result Of a Hard Border due to #Brexit’ https://t.co/KEv3eq4sv0 pic.twitter.com/9tECv6T71c

The British PM is not willing to meet with EU officials until the Irish backstop is removed, sparking consternation from Irish Taoiseach Leo Varadkar, who told Mr Johnson that he could not scrap the Irish backstop as a precondition to the UK’s Brexit agreement.

Mr Varadkar also said that the UK has yet to identify and demonstrate alternatives to the backstop to secure the Good Friday agreement.

Nancy Pelosi, Democratic Speaker of the House, said that there was “no chance whatsoever” of Congress passing a US and UK trade agreement, with the Adhoc Committee to Protect the Good Friday Agreement writing to Julian Smith, UK secretary for Northern Ireland, on Sunday urging him to consider the dangers of Mr Johnson’s statements on scrapping the Irish backstop.

Nancy Pelosi is absolutely right. The US and the EU will stand firmly with Ireland and protect the Good Friday Agreement.

“I think there is enough meat in the Irish-American lobby to stop a UK trade deal if the Good Friday Agreement is affected,” A European diplomat said as quoted by the Guardian.

Boris Johnson, the UK’s newly appointed Prime Minister, is touring the UK’s four countries—Scotland, Northern Ireland, Wales and England—to campaign for the UK’s no-deal Brexit plans and convince Brits that the UK government will preserve the integrity of the British Union. But the PM was booed whilst meeting Scottish first minister Nicola Sturgeon at Bute House on Monday, with the latter stating that Edinburgh was preparing “alternative options”, namely a second referendum on Scottish independence.

While Mr Johnson has promised not to allow border infrastructure to build between Dublin and Belfast, he has also said that the UK would leave the EU by 31 October "no matter what". Taoiseach Varadkar also said in a statement urging both governments to “be fully committed to the Good Friday Agreement” which requires the “sovereign government to exercise powers with rigorous impartiality”.