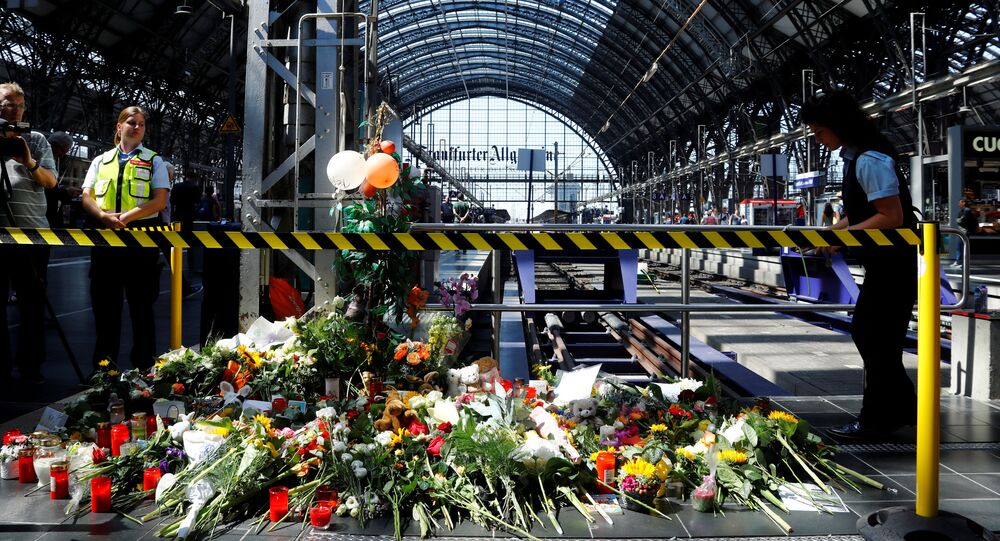 German prosecutors say that they are still trying to determine the motive of the suspect, who is due to undergo a psychiatric assessment in connection with the Frankfurt tragedy.

An Eritrean man, who currently faces charges for pushing a 40-year-old woman and her eight-year-old son in front of an approaching high speed train at Frankfurt’s main train station on Monday morning, was previously wanted by Swiss police, the news outlet Swissinfo reports.

Swissinfo cited local policemen as saying that the 40-year-old arrived in Switzerland in 2006 and received a residence permit there in 2011. Switzerland remains home to more than 30,000 Eritreans, the largest registered diaspora of any country.

“Zurich cantonal police had been looking for him since [last] Thursday, when he locked up his family and a female neighbour, whom he had threatened with a knife, and then fled,” the news outlet reported, adding that the family was then freed by police.

8-year-old child and his mother were thrown in front of an ICE train in Frankfurt. the mother could still save herself! but the child was run over by the train and is dead! the culprit is a Eritrean! He was arrested at the station! The world we live in is cruel! pic.twitter.com/OkDuAlDrQo

Frankfurt prosecutors, for their part, said that the suspect told investigators he had taken a train from Basel to Frankfurt several days beforehand.

German federal police chief Dieter Romann, in turn, was quoted by Swissinfo as saying that the suspect managed to successfully integrate himself in Switzerland and that he was described as “exemplary in the view of the asylum authorities”.

Frankfurt public prosecutors' spokeswoman Nadja Niesen, meanwhile, has said that there were no indications that the man was under the influence of any controlled substances, adding that “the crime suggests a psychiatric disorder”.

“In the course of the subsequent investigation, the accused will certainly be psychiatrically examined, to allow an assessment of his criminal culpability,” she pointed out.

Earlier, witnesses claimed that the man had deliberately pushed the boy and his mother under the train before trying to run away.

The mother was able to roll off the tracks but her son died in the incident; the man also tried to push a 78-year-old female passenger under the train. If found guilty, the suspect may face life behind bars, according to prosecutors.

Since 2015, Germany has welcomed nearly a million refugees amid harsh criticism of Chancellor Angela Merkel’s “open borders policy”, including her failure to resolve migrant crisis-related crime after mass sexual assaults staged by migrants in Cologne on 2016 New Year’s Eve.