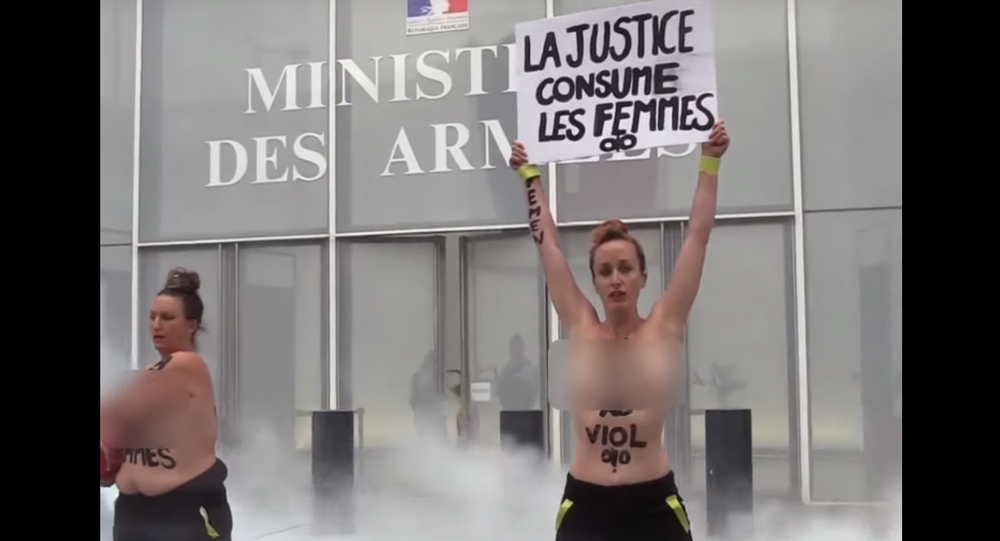 The protest came after three firefighters were charged on Saturday with the sexual abuse of a 14-year-old girl in 2009. They were initially indicted on the more serious charge of aggravated rape of a minor.

Three topless FEMEN activists have staged a protest in front of the Ministry of the Armies general staff headquarters in Paris. The women stripped to remonstrate against 22 firefighters accused of raping a teenage girl.

The activists, posing as firefighters with fire extinguishers in their hands, stood in front of the building with a sign reading "Justice consumes women" and "Fire! Rape!" written across their chests.

The protest came after a court decision on Saturday to charge three of the accused firefighters with sexual abuse, although they were originally charged with the more serious crime of aggravated rape of a minor.

The victim lodged a complaint in 2010, accusing 22 firemen of having raped her on multiple occasions when she was aged between 13 and 15 years old and while she was on heavy medication.

Femen is a feminist group that was founded in Ukraine in 2008 and is now based in Paris. The group is known for its activists protesting topless against a wide range of issues, including gender, religion, homophobia and sexism.