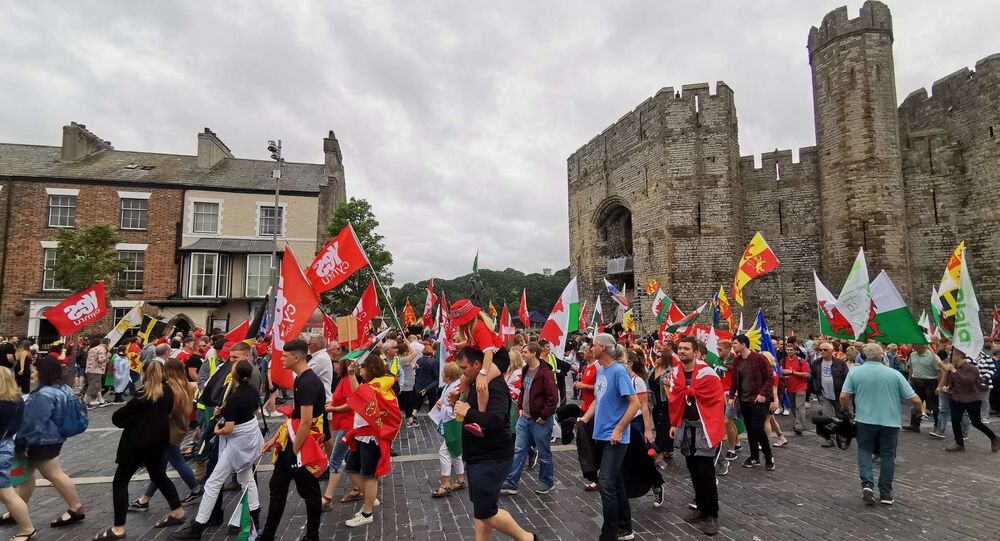 The northwestern Welsh city near the island of Holyhead hosted its own independence rally following the successful grassroots ‘All Under One Banner’ (AUOB) Cymru campaign in May in Cardiff.

Thousands of people took to the streets of Caernarfon on Saturday to rally for Welsh independence. Crowds gathered from 11:00 to 13:00 GMT at Victoria Dock Car Park and marched to Balaclava Road, along Northgate Street to Palace Street, to convene at the main site at Castle Square.

The event, organised by AUOB Cymru and Yes Cymru, was supported by numerous groups campaigning for an independent Wales, but did not have ties to a specific political party.

Whilst the BBC tallied around 5,000 attendees, organisers counted more than 8,000 people joining the event.

The rally came as a recent YouGov poll revealed that support for Welsh independence stood at 36 percent, with support for Westminster dropping below 50 percent for the first time since polling began.

Two attendees said that they had seen the “advertisements on the back of a bus stop and thought it would be a good idea”.

“I think our minds have changed a lot in the last few weeks,” one of the attendees said. “Because of the politics and a certain buffoon,” she said, hinting at the appointment of UK prime minister Boris Johnson.

When asked which recent event had motivated them the most, one of the attendees replied, “Boris Johnson”.

“Not that I’ve ever been against it, but I don’t think that I would’ve come here today if it wasn’t for that,” she added.

Gwyn Llewelyn, YesCymru organiser, said that roughly 8,000 people had attended the event, according to those tallying head counts at the entrance.

Speaking on the call for Welsh independence, Mr Llewelyn said that he thought that Wales had “been a nation without confidence for too long” and that there had always been “that sense of wanting to be different, but [the Welsh] have always listened to the propaganda of the British establishment—that we’re too small, too stupid, too poor.”

He added: “But now, the main catalyst is what happened with Brexit, which blew the lid on how the British establishment treats the peripherals—Scotland, Northern Ireland and Wales—and I think that people see now how we’re being treated, and that’s why we’re here today.

Scottish comedian, Hardeep Singh Kohli, thanked the Welsh for inviting him to the event. “I’m from Glasgow, but when I’m in Wales, I feel Welsh,” he said.

He said that the reason why he joined the movement was because he could not "sleep for thinking of the injustices visited upon the Welsh”.

“No country in the world has more castles than Wales”, Mr Kohli said. “Why is that? Because they needed to build them to keep you down”.

“I’m not here to tell you why independence is a necessity, because I ask you, ‘Why isn’t it’,” Mr Kohli added. “Wales is a country, and a great country—the original country [of the UK]”.

The protests come after Boris Johnson, who became Conservative leader and UK prime minister on 24 July, promised to lead the UK out of the European Union by the 31 October deadline. Mr Johnson attacked the Irish backstop on Saturday, calling it "undemocratic and divisive" and threatened to block Brexit negotiations if the EU failed to ditch it.

The newly appointed head of state praised leaving the EU as a "massive economic opportunity", but his sentiments were not shared by EU chief Brexit negotiator Michel Barnier, who slammed Mr Johnson for demanding to remove the backstop and urged EU officials to unite against the new PM, as well as Irish prime minister Leo Varadkar, who said a hard Brexit would undermine British unity and pull Northern Ireland and Scotland away from London.