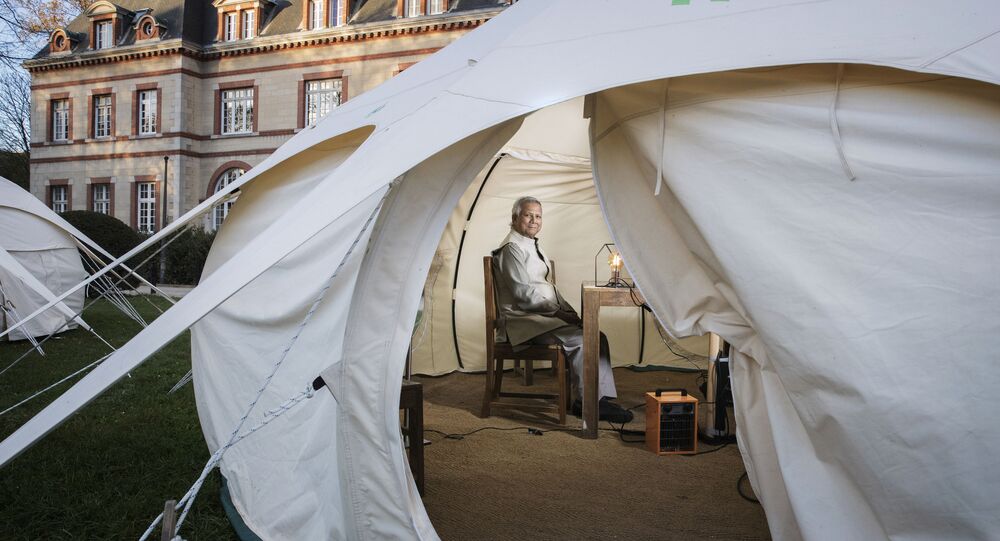 According to local Muslims, the name plate set up in Norway's third-largest city of Stavanger to honour Bangladeshi Nobel Peace Prize winner Muhammad Yunus is offensive as the Prophet's name is being stepped upon.

The Muslim Joint Council, which numbers some 8,000 members, has called for a plate set up to commemorate Nobel Peace Prize winner Muhammad Yunus to be removed from the ground. The rationale is that the award winner shares names with Islam's main prophet, and trampling upon the holy man's name is a sign of utter disrespect.

The Bronze plate to honour Muhammad Yunus, who won the 2006 Peace Prize for his pioneering work with microcredit loans, was set up seven years ago. Similar installations exist in Stavanger in honour of fellow peace prize winners Desmond Tutu, the Dalai Lama and Al Gore.

“Here it lies on the ground, people step on it, and no one sees what it is,” Summer Ejaz, spokesperson for Muslim Joint Council Rogaland, told national broadcaster NRK, calling the name Muhammad “respectable and gracious”.

By his own admission, criticism from fellow Muslims has been pouring in for several years, together with calls to elevate the bronze plate from the ground to eye level.

“Stavanger is a diverse city with inhabitants from 200 different countries. It is therefore important that the municipality safeguards the minority population's feelings in this matter. It has to do with well-being and people's mental health,” Ejaz explained.

The call has since polarised the city. Vice Mayor Bjørg Tysdal Moe of the Christian Democrats party said she understands the Muslims' frustration and is open to accommodating their demands.

“When the Muslims respond, I take it seriously. And since this work of art has been there since 2012, it is important for us to get a dialogue about this,” Moe told NRK.

By contrast, the right-wing Progress Party was “extremely sceptical” about the request, suggesting that the plate should stay put.

“We cannot take into account each and every offence every time someone gets triggered,” Kristoffer Sivertsen, Progress Party leader in Stavanger told the newspaper Dagsavisen, calling it “offence hysteria”.

Ingrid Rosendorf Joys, the secretary general of The Council for Religious and Life Stance Communities in Norway found it “strange” that a tribute to a peace prize winner may be seen as “affront against the Prophet”.

The Norwegian Atheist Society defended the name plaque, asking “what has Prophet Muhammad done to deserve any respect?”

The turmoil reached the Bangladeshi entrepreneur himself, forcing him to weigh in on the debate.

“No society shall be hurt by my name written in their city”, Muhammad Yunus told Dagsavisen, supporting the local Muslims. “I can fully understand their feelings. In order for them not to perceive it as offensive, I believe that the plate should be removed from the ground,” the Peace Prize winner said.

Stavanger Mayor Sagen Helgø, of the Conservative Party, argued that the installations is “by far” appropriate in terms of freedom of expression. She stressed that it was “obvious” that the case was being made by private individuals.

79-year-old Muhammad Yunus is a Bangladeshi social entrepreneur, banker, economist, and civil society leader who was awarded the Nobel Peace Prize for founding Grameen Bank and pioneering the concepts of microcredit and microfinance, that is, loans given to entrepreneurs too poor to qualify for traditional bank loans.

Stavanger, often called “Norway's oil capital” is the country's third-largest city with 130,000 inhabitants, with immigrants constituting over 20 percent of the population.