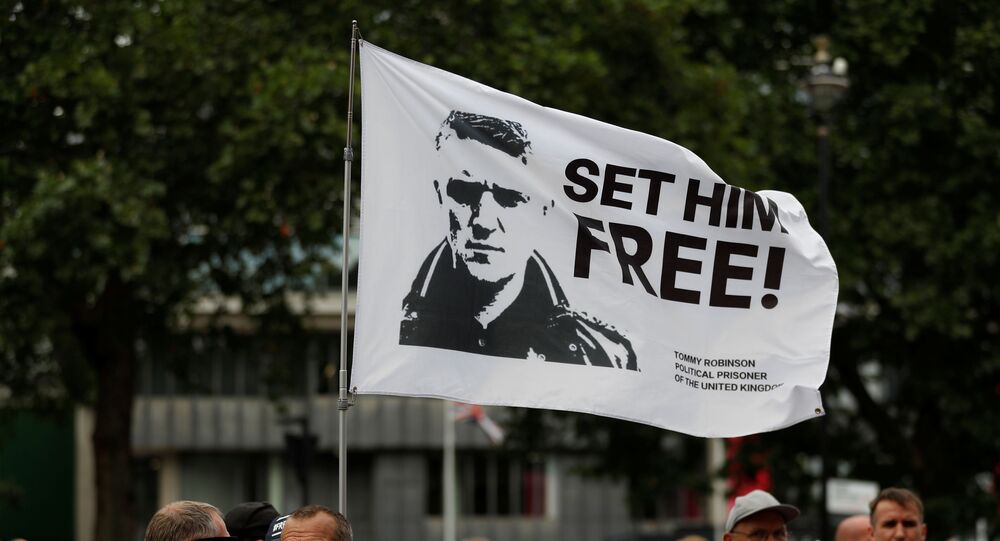 Robinson, 36, is serving time in a London prison for filming defendants in a child grooming trial despite a reporting ban. Robinson has repeatedly criticised the British establishment and asked US President Donald Trump for asylum last week, saying that his country has “fallen”.

Tommy Robinson was punched by an elderly man during an altercation in prison, where he is currently serving a nine-month sentence on contempt of court charges, according to the Daily Star.

The tabloid reports, citing sources in London’s Belmarsh prison, that Robinson tried to “intimidate” an old man in a shower block, who responded by flooring him with a single punch.

“There was a bit of pushing then one prisoner, a 70-year-old, very hard pensioner, decked Robinson with a punch to the jaw,” an insider was quoted as saying.

“He didn’t have any idea who he had hit, but he wasn’t going to back down. Those are the rules in Belmarsh, you fight or back down.”

It is claimed that the fight took place within 72 hours of Robinson's arrival at the prison. No official report was made as he told an officer that he had slipped.

The English Defence League founder, whose real name is Stephen Yaxley-Lennon, was sentenced to nine months in jail on 11 July for contempt of trial, and is expected to be released on licence after 10 weeks.

He received a 13-month jail term in the same case last May, but was freed on appeal after 10 weeks behind bars, pending re-trial.

He was jailed for contempt of court after live-streaming footage of defendants in a child grooming trial last year, in breach of reporting restrictions.

The 20 members of the notorious Huddersfield grooming gang, which was at the centre of the trial, were all ethnically South Asian and predominantly of Pakistani heritage.

During the live broadcast of the defendants on Facebook, Robinson cited demographic data about the number of Muslims living in Britain and discussed the UK-based Muslim rape gangs.

"Posting material online that breaches reporting restrictions or risks prejudicing legal proceedings has consequences, and I would urge everyone to think carefully about whether their social media posts could amount to contempt of court,” Attorney General Geoffrey Cox said last week.

Robinson, meanwhile, insisted that Britain has “fallen” and begged Donald Trump to give him US asylum, claiming that he could be killed if he was sent to prison because the UK jails are “controlled by jihadi gangs”.