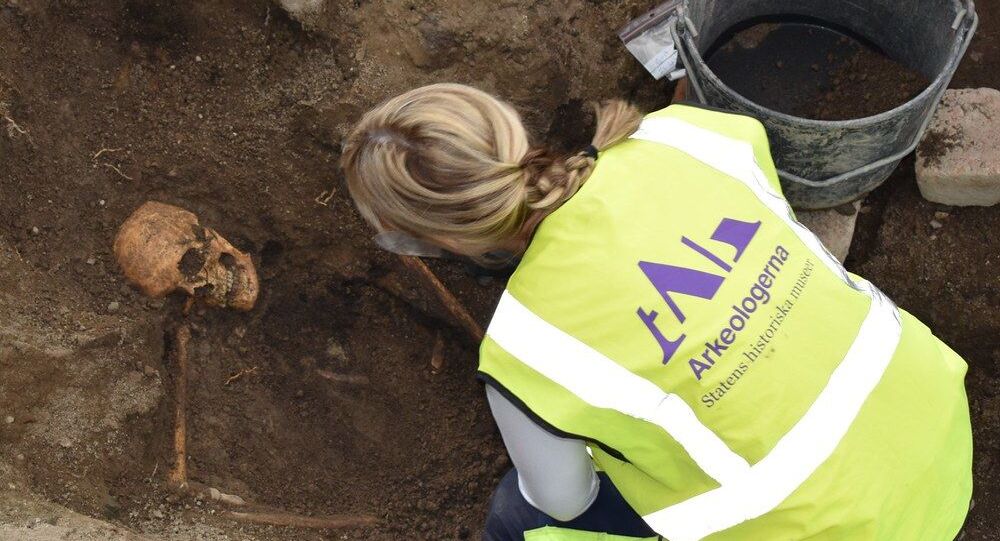 One of the men, most likely a high-ranking warrior or even a ruler, was buried with his horse and a dog. As is apparent from his skull, he died of a gruesome head wound.

Two unburned Viking-era burial ships have been uncovered near the village of Gamla Uppsala, which is one of Sweden's most important ancient Viking and Pagan sites.

“This is a unique excavation, the last burial ship was examined 50 years ago”, a triumphant Anton Seiler, an archaeologist at the National Historical Museums (SHMM), told national broadcaster SVT, describing the find as a “sensation”.

The reason for his joy is that intact ship burials are few and far between. Only around ten discoveries of this kind have been made to date in the Scandinavian nation, according to researchers. The last discovery was made in the 1973, close to half a century ago.

Ship burials, where people were put to rest in full-sized vessels, were only available for high-ranking members of the warrior aristocracy, not commoners.

“Only a singular people were buried in this way”, Seiler explained. “You can suspect they were the most distinguished members of the contemporary society since burial ships in general are very rare”.

The man in one of the graves was put to rest with a plethora of objects, such as weapons, shields and a comb. However, the remains of animals, including a horse and a dog, were also found. The animals, obviously belonging to the man, were placed at the fore of the boat, whereas the owner was rested at the stern.

The seemingly undamaged body, however, turned out to have a large hole in the head. The archaeologists' shock was mixed with enthusiasm.

​“He was killed”, osteologist Caroline Arcini suggested. “I am convinced that the wound was caused by a sword. What amazes me, however, is that we cannot find the missing skull piece”.

The Archaeologists, National Historical Museums / Arkeologerna, Shm
Osteologist Ola Magnell uncover the skeletons of a horse and a dog

One hypothesis is that the man miraculously survived the gruesome wound. However, according to Arcini, death was most likely the outcome.

At present, the archaeological team is in full swing analysing and interpreting the findings in order to shed more light. “To be continued”, Arcini promised.

A unique find of two boat burials from the Viking Age (800–1050 AD) have been uncovered in Uppsala. One of the two graves was intact with remains of a man, a horse and a dog. The two boat burials were found during an excavation at the vicarage in Old Uppsala (Gamla Uppsala) an area outside of the town of Uppsala. A cellar and a well from the Middle Ages were excavated and then one of the boats was observed beneath the more modern structures. The two boat burials have been excavated during the last month and the results are sensational. In Sweden, only around ten boat burial sites of this kind is known previously, mainly in the provinces of Uppland and Västmanland in mid Sweden. ”It is a small group of people who were buried in this way. You can suspect that they were distinguished people in the society of the time since burial ships in general are very rare,” says Anton Seiler, who works at The Archaeologists, part of the National Historical Museums in Sweden. One of the two newly discovered graves was intact while the other unfortunately was damaged when the much later cellar was built. Remains of a man was found in the stern of the intact boat burial. A horse and a dog accompanied him in death and archeologists also uncovered personal items including a sword, spear, shield, and an ornate comb. The fact that it’s an intact grave undisturbed by plundering, makes this a particularly interesting opportunity to study these kind of rare burial traditions with modern scientific analysis methods and documentation techniques. This is the first time in Sweden these kind of methods are used in relation to this grave type. A boat burial was a specific funeral practice in which the dead person was placed in a ship or boat often along with rich gifts like jewellery or sets of weapons and other objects. Normally the practice was to cremate the dead but not in these cases. Selected parts of the find will go on display at Gamla Uppsala Museum and Stockholm’s Swedish History Museum. #archaeology #archaeologist #archaeologylife #arkeologi #arkeologerna #boatgraves #ironage #vikings #vikingage #vikingatid #vikingar #uppsala #boatburial #boats #båtar #båtgravarnaigamlauppsala

Although the exact age of the graves remain unclear, most burial ships of this type originate from either the Viking Age (793–1066 AD) or the era immediately preceding it, known as the Vendel Period (500-793 AD).

As early as the 4th century and onwards, Gamla Uppsala was the key religious, economic, and political centre of the Norse world. The earliest Scandinavian written sources name it as the residence of the fabled Yngling dynasty. For centuries, it served as the location for the Thing of all Swedes (roughly a Norse general assembly). When Sweden became a Christian nation, Gamla Uppsala became Sweden's archbishopric.