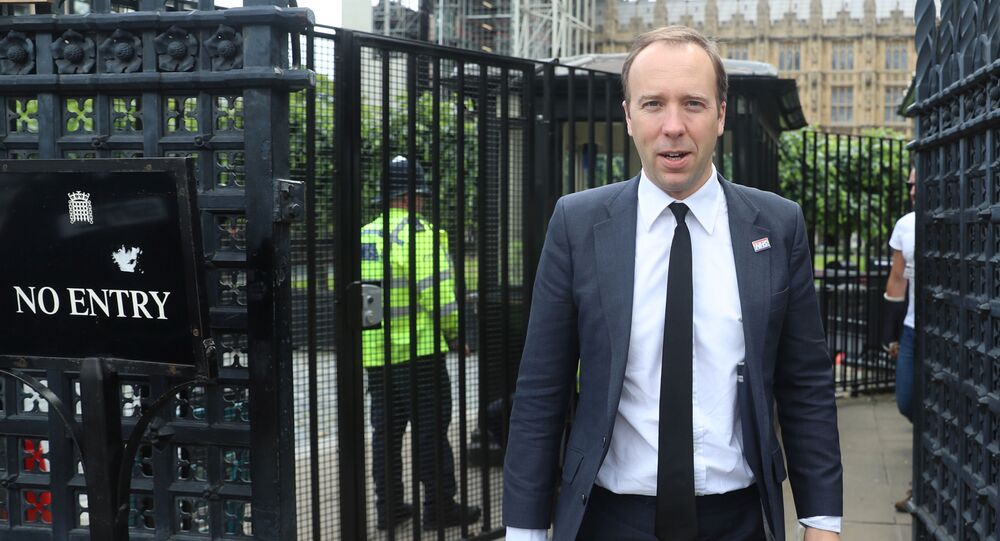 The statement comes amid a diplomatic row between Britain and the US over the leaked memos of UK Ambassador to the US Kim Darroch, in which he specifically described President Donald Trump as "inept".

UK Health Minister Matt Hancock has urged London to reset its ties with Washington now that the two countries are embroiled in a diplomatic row.

"We have to reset those relations with the White House which is bigger than one individual because it's a matter of having those relationships in a good place at every level”, he told the BBC.

The statement comes amid the US-UK diplomatic spat over the leaked memos of UK Ambassador to the US Kim Darroch, in which he described President Donald Trump as "inept" and "incompetent".

On Tuesday, Trump took to Twitter to again lash out at Darroch, calling him a "stupid guy" and noting that “the wacky Ambassador that the UK foisted upon the United States is not someone we are thrilled with”.

"I don’t know the Ambassador but have been told he is a pompous fool”, Trump added.

Trump earlier claimed that Darroch had not served his country well and that Washington was not a "big fan" of his. Trump also said the US would cut off contact with Darroch, though the ambassador remains in his post.

....thought of within the U.S. We will no longer deal with him. The good news for the wonderful United Kingdom is that they will soon have a new Prime Minister. While I thoroughly enjoyed the magnificent State Visit last month, it was the Queen who I was most impressed with!

The remarks were reportedly followed by the White House disinviting Darroch from a dinner for the Emir of Qatar hosted by US Treasury Secretary Steven Mnuchin.

UK Prime Minister Theresa May's spokesperson, for his part, underscored that Darroch had May's "full support", while British Foreign Secretary Jeremy Hunt pointed out that London would not allow "any interruption" to its "superb relationship" with the US due to the leaked memos.

UK International Trade Minister Liam Fox, in turn, described the leak as “malicious”, pledging to apologise to Trump’s daughter Ivanka Trump for the fact that standards of “either our civil service or elements of our political class” had “lapsed in a most extraordinary and unacceptable way”.

On 6 July, the newspaper Daily Mail published excerpts from secret cables that Darroch had sent to London in which the diplomat, in particular, described the White House as "uniquely dysfunctional", also warning that Trump could end up in "disgrace."