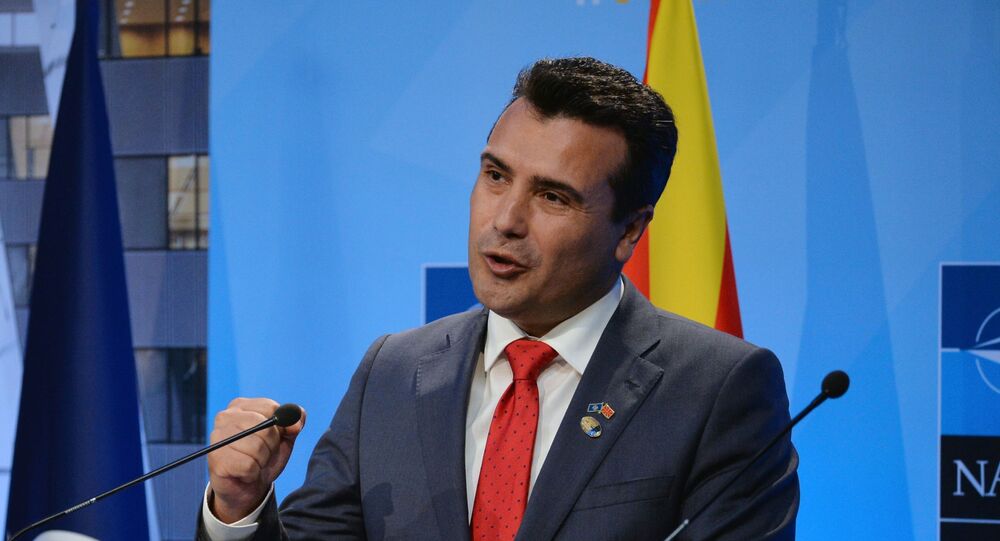 BELGRADE (Sputnik) - North Macedonian Prime Minister Zoran Zaev on Tuesday confirmed he had telephone conversations with Russian pranksters and linked these calls to the country's aspirations for NATO membership.

"There are structures that use new forms, tactics and tools to discredit the media, most of which target individuals and states with Euro-Atlantic [the European Union and NATO] aspirations," Zaev said during a special press conference in Skopje.

The prime minister noted that manipulations of these structures usually came from media propaganda with "a clear anti-NATO stance," explaining that in North Macedonia "channels that spread lies, anti-NATO propaganda and disinformation are the first to release them."

The Macedonian prime minister went on to claim that the recording published by the pranksters bore traces of "technical intervention" and may prompt false conclusions about its content.

"This concerns the part about the Macedonian Orthodox Church in which I speak only about my commitment to ensuring that the MOC has autocephaly," he added.

The MOC unilaterally proclaimed its autocephaly and independence from the Serbian Orthodox Church in July 1967. Neither Serbian Orthodoxy nor other Orthodox churches have recognized the decision.

Zaev added that while he was very upset that he had been a victim to his "openness," he was not going to resign. He added that he was now in "good company" with other world leaders who had similarly been tricked by the pranksters. These include Turkish President Recep Tayyip Erdogan, Belorussian President Alexander Lukashenko, former Georgian President Mikheil Saakashvili and many others.

In the meantime, Zaev said that regretted saying that Serbian President Aleksandar Vucic was under the Kremlin's control during the prank phone call.

"I regret that ... because of inattention, you can say something which is not the case. Serbia’s certainty regarding EU integration is clear. This is not the point, I do not want to offend anyone but the point is that, indeed, cooperation between Serbia and Russia is very noticeable now," he said.

Former Foreign Minister of Macedonia, the previous name of the country, and current opposition member Antonio Milososki said on Tuesday that conversations between Zaev and the pranksters were a major political scandal that could lead to Zaev's resignation.

On Monday, pranksters Vladimir Kuznetsov and Alexei Stolyarov, known as Vovan and Lexus, released a recording in which they posed as former Ukrainian President Petro Poroshenko during several phone talks with Zaev. In the recordings, the Macedonian prime minister allegedly agreed to "bribe" Archbishop of Constantinople Bartholomew I in order to get autocephaly for the Macedonian Orthodox Church (MOC). They also discussed NATO and the situation in the region of Kosovo and Metohija.