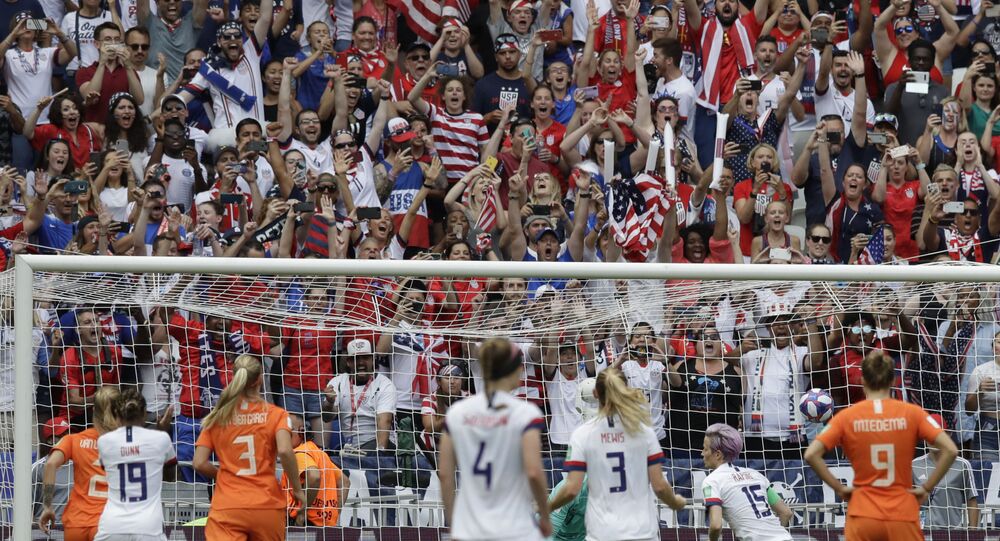 The US team defeated the Netherlands squad 2-0, with second-half goals from Megan Rapinoe and Christen Press during the final game of the FIFA Women's World Cup at Stade de Lyon in France on Sunday.

"History has just been made. We are here at a sports bar in Lyon, France...", a Fox News reporter said while covering the victory of the US national women's team at one of the many bars in the French city.

Local fans, however, did not share the reporter's delight about the US success in the women's Mundial. The video piece from this Fox News report shared on twitter shows patrons of the bar chanting: "F*** Trump!", a distinctively audible sound behind the reporter's back.

Meanwhile, members of the US National Women's team have also been more than just a little critical of US President Donald Trump.

According to The Hill, Megan Rapinoe has rejected an invitation to the White House. Trump fired back at the US team's star midfielder, tweeting: "Megan should WIN first before she TALKS! Finish the job!"

Rapinoe was awarded the Adidas Golden Boot, an award given to the top scoring player in the tournament. She is the second American woman to win the award, ESPN reported.

Another football star, Ali Krieger, slammed Trump, noting that she could not "respect a man that warrants no respect", according to The Hill.

It is unclear whether the US team will be invited to the White House and, if they are invited, whether they would accept the invitation.