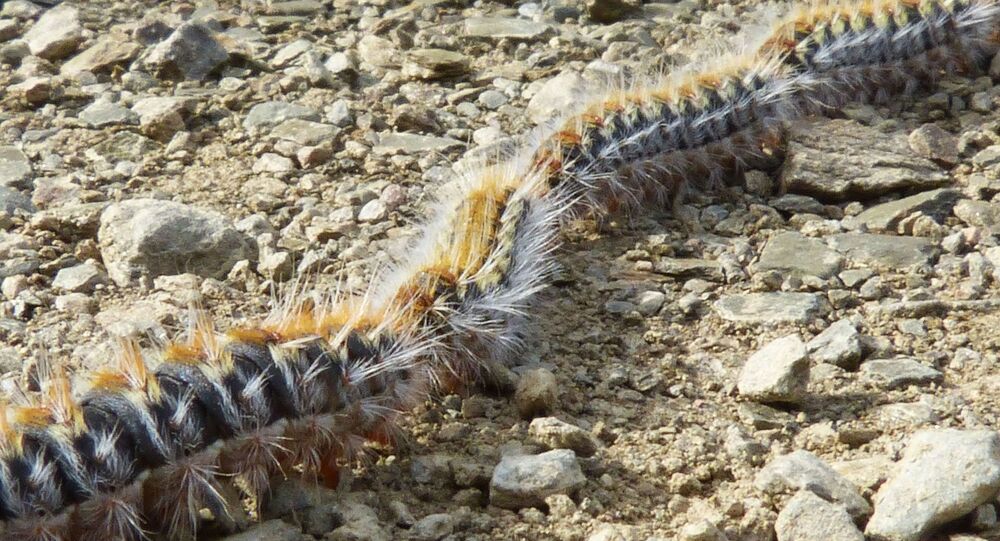 Germany Brought to a Standstill as Toxic-Haired Caterpillars Strike

In past years caterpillars were a rare sight in Germany, found only in isolated areas of woodland. However, a mild spring and warm, dry summer have changed that.

An infestation of terrifying toxic-haired caterpillars has brought parts of Germany to a standstill, resulting in closures of swimming pools, restaurants, public parks and sections of motorways, reports The Guardian.

People in affected areas have been complaining of nasty rashes and breathing difficulties.

The Oak processionary moth caterpillar, named due to how they form lines to travel between oak trees they feed on, have long hairs containing an irritating toxin. Victims of close contact with the bugs or their hairs develop blistering rashes, dizzy spells and asthma attacks.

Reports suggest that Brandenburg, Saxony-Anhalt, Baden-Württemberg, Bavaria and the western state of North Rhine-Westphalia have been particularly badly affected.

In Münster, six people had to have eye operations to remove caterpillar hair that got stuck in their corneas, while in Mülheim, nine children were rushed to a hospital last month over severe rashes and breathing problems.

Nearly 500 trees were found to be infested in a Dortmund park, which had to be closed to visitors for three weeks.

Organisers of a rock festival in Nuremberg had to hire a company to remove caterpillar nests that had infested about 50 trees at the concert venue.

Frankfurt city authorities resorted to helicopters as they sprayed 220 hectares of forest with biocides to stop the larvae from eating oak leaves.

Sections of the A1 motorway were closed for three nights in May allowing firefighters to tackle infected trees, as the barely-visible insect hairs could affect the health of drivers and local residents.

Caterpillars were relatively rare in Germany over the years, spotted chiefly in isolated woodland areas. However, this year’s mild spring and warm, dry summer wrought a dramatic change, and their nests have been found all over the country in vast numbers.

Caterpillars begin to turn into months in early July, but the threat posed by their nests remains, since each has up to 700,000 hook-ended hairs with toxins that stay active for years.

Oh, Bite Me! Bedbugs Infest Air India Flight From US to Mumbai (PHOTOS)