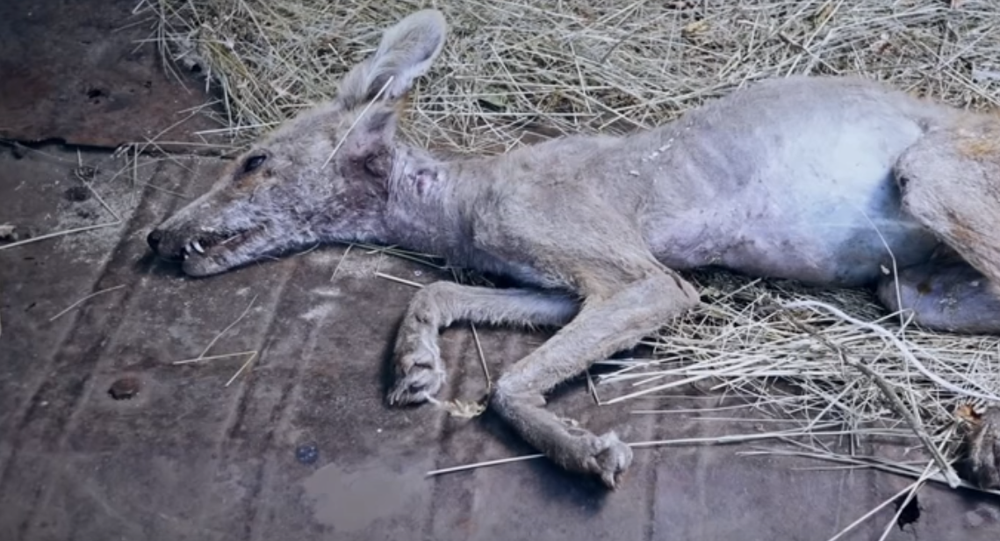 While the creature’s remains resembled a sickly fox, some of the locals decided to take the carcass to a vet clinic in order to determine the exact nature of the slain entity.

A resident of the village of Ivanivka, located in the Poltava region of Ukraine, killed  a bizarre-looking creature he stumbled upon near his residence, with the locals, perhaps jokingly, describing the beast as a "chupacabra", local media outlet Echo reports.

The "monster-slaying" encounter took place on 3 July when the villager, Oleksandr Blizniuk, heard his dogs barking and went to investigate what spooked them, finding some sort of creature hiding between stacks of firewood next to his house.

Thinking that he’s dealing with a fox, the villager decided to drive it away with a stick but, upon seeing the creature up close and becoming startled by its grisly appearance, instinctively lashed out against it with his improvised weapon, hitting the beast in the head and killing it instantly.

Initially, Blisniuk simply disposed of the creature’s carcass by tossing it into a pit on the village’s outskirts. However, rumours of this encounter quickly spread across the settlement and some of the locals decided to take a closer look at the corpse.

Having examined the remains of the creature, which resembles a sickly fox, the locals joked about it resembling a creature of urban legend known as a "chupacabra", and decided to bring it to a vet clinic for analysis, though the results of these tests remain unknown at the time of the article’s writing.

A Creature of Nightmares: Watch Giant Squid Approach Camera in Gulf of Mexico