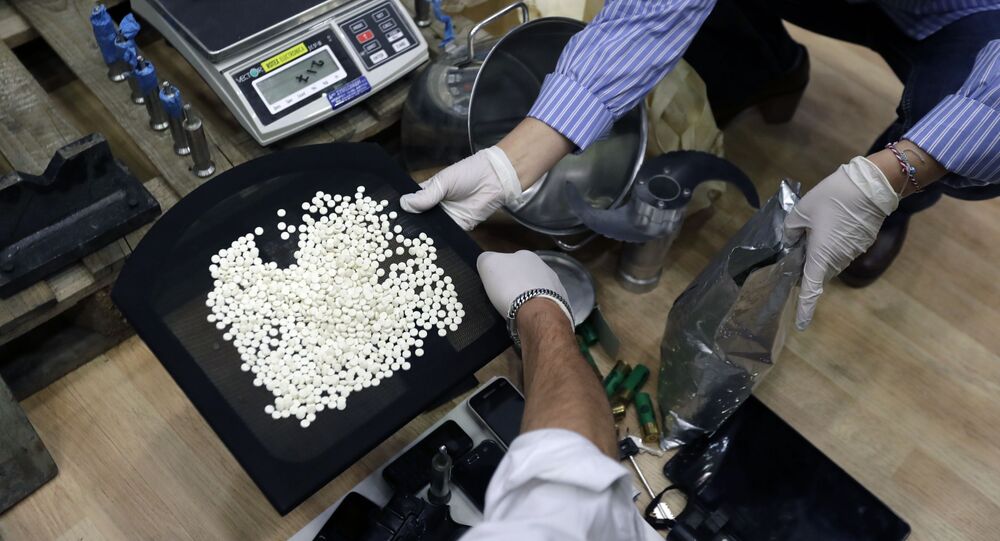 It took agents of three law enforcement agencies a week to count the seized pills, which arrived in Greece from Syria in containers said to be loaded with floorboards.

Greek authorities have announced the seizure of what they called the biggest-ever haul of Captagon, the amphetamine-type drug associated with Middle Eastern terrorists.

The Greek Finance Ministry's Financial Crimes unit (SDOE) said the haul, which was worth $660 million, was found during a joint operation with police and coast guards.

The operatives are said to have seized three Captagon-loaded containers that arrived in the port of Piraeus in the southern mainland of Greece. The haul is believed to weigh over 5.25 tonnes – equivalent to more than 33 million pills.

The containers, which came to Greece from Syria, were to be loaded on a China-bound ship. Officials said China is one of the countries that is not associated with the use and production of Captagon.

It appears that the pills, which were hidden inside hollowed-out floorboards, were set to be shipped to China to avoid suspicion before being sold sold somewhere in the Middle East.

The haul was busted back on 27 June, but it took the authorities “7 days and 20 officers to search 22,000 floorboards to find the drugs", an SDOE official said.

Captagon is the trademark for fenethylline, a synthetic stimulant drug which has been widely used by militants throughout the Syrian conflict to help them stay awake during prolonged battles. According to the Global Initiative Against Transnational Organised Crime, the drug is mainly produced in war-torn Syria and neighbouring countries.

It is then shipped to the Arab states of the Persian Gulf, whose authorities alert each other about drug-smuggling attempts through the Regional Intelligence Liaison Office.

In late May, a $1.4-million cache of Captagon was found and destroyed by US-backed militias in south-eastern Syria.

In April, over 800,000 Captagon pills worth over $12 million were seized in Lebanon in cooperation with Saudi authorities.

So far this year, Dubai customs officers have busted over 10 million pills that drug traffickers attempted to smuggle into the UAE.

Since 2008, amphetamine seizures in the Arabian Peninsula have made up more than half of the global total, according to a 2018 report by the European Monitoring Centre for Drugs and Drug Addiction.