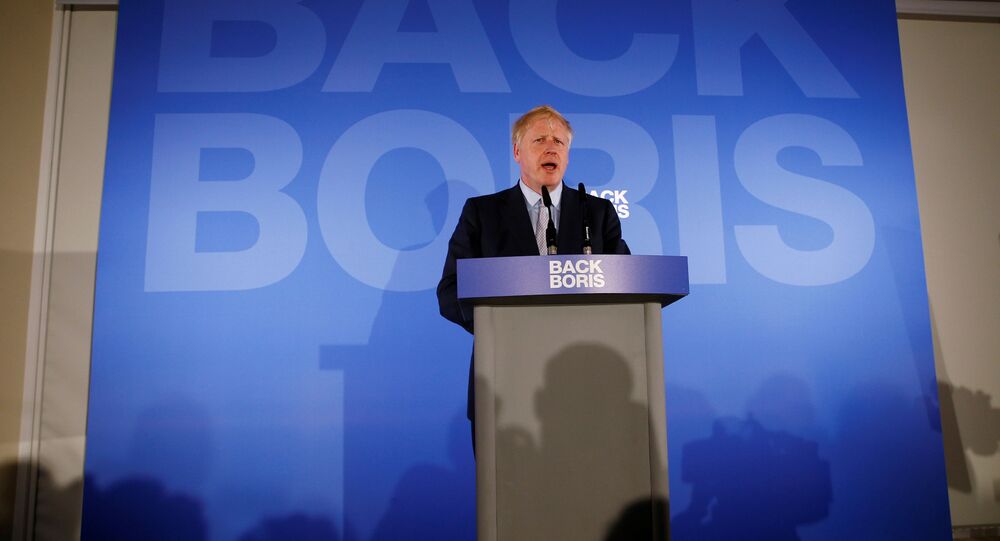 With the next UK PM set to be announced on 23 July, Boris Johnson remains the frontrunner, outperforming rival Jeremy Hunt after gaining 162 votes in the final parliamentary vote for MPs last month.

In an exclusive for The Sun, Tory leadership candidate Boris Johnson has unveiled a manifesto where he pledges to unite Britain by delivering a good Brexit and averting a scenario that could result in the Labour Party’s Jeremy Corbyn taking up residence at Number 10.

Johnson claimed his vision of the country was “tailor-made for Sun readers and all their concerns”.

Writing in The Sun, the former London Mayor deplored the fact that economic dynamism and success are not shared equally by the whole of the UK, as he stated he would forge a more unified Britain, closing the “opportunity gap” between haves and have-nots:

“If the Brexit vote taught us anything, it is that too many parts of the UK feel left behind — that they do not get the chance to compete or to show off their potential.”
“I have a unique plan to bring this country together, and to unite our society in the way that I was able to unite London.”

Johnson referenced his work as London Mayor as he pledged to use a similar approach to level up across the whole of the UK.
He promised to reinvigorate the “left behind” areas of the North and Midlands by delivering desperately needed new rail networks.

Boris Johnson, front-runner in the race for Number 10, promised to boost police numbers by 20,000 by 2022, in a costly pledge that will reportedly require £1.1 billion.

“We need to end the current crime wave across the country, just as we ended it in London,” he stated.
Johnson promised to put an end to crime by cracking down on drugs gangs and removing knives from the streets, and effectively granting police the support they require to carry out proper stop and search.
“Yes, some people say stop and search is discriminatory. I say nonsense. Talk to the mums of kids who get sucked into the gangs,” writes Johnson.

The Tory Leadership candidate underscored that the best solution to most social evils was the prospect of a good job, which signifies  a great deal more should be done for education.

“I pledge, if elected, to increase per-pupil funding both for primary and secondary schools, so that spending resumes its pre-2015 trajectory.”
“We should also boost funding for further education. We need to do far more to unleash the practical talent in this country.”

“There is one man who simply doesn’t get it — and whose plans would mean ruin for this country — and that is Jeremy Corbyn and the modern Labour Party.”
“He would be a political and strategic disaster for this country.”
“In his handling of the UK economy he would be positively catastrophic, with new high taxes on business, on pensions, on inheritance, on gardens, on financial transactions and just about everything else. He cannot and must not be allowed anywhere near Downing Street,” writes Boris.

Insisting he is the only one who “really understands and believes in the project”, the former Foreign Secretary promised to finally deliver Brexit by October 31.

“ Kick the can and we kick the bucket. And by the way, I think it is time we had someone who campaigned for Brexit — and who really understands and believes in the project — to get us out properly,” he writes.

Johnson goes onto insist that to “prevent the horror of a Corbyn government”, voters who lost faith in the Tory Party needed to be courted and their trust in politics rebuilt by delivering Brexit.

He writes that “We must deliver on the will of the people, or we Conservatives will face extinction.”

“I believe we can get a great deal — but the only way to do that is to prepare to leave without one.”

The next UK PM is set to be announced on 23 July.

The 55-year-old Conservative member of Parliament, former foreign minister, and former mayor of London is the presumed frontrunner to replace Theresa May, who was forced to step aside after failing to deliver a Brexit deal.
Johnson is now one of two finalists — along with foreign minister Jeremy Hunt — vying for the prime ministership.