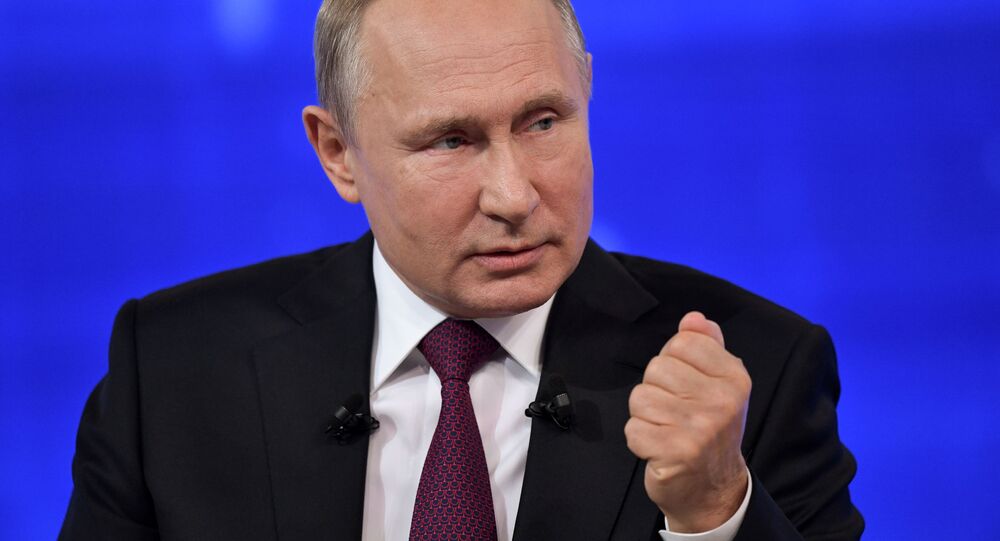 MOSCOW (Sputnik) - Russian President Vladimir Putin said in an interview published on Thursday that both Moscow and London were interested in fully restoring bilateral relations.

"I think that both Russia and the UK are interested in fully restoring our relations. At least I hope that a few preliminary steps will be made," Putin told the Financial Times newspaper.

The Russian leader noted that UK companies were eager to work with Russia.

"We know that businesses in the UK (by the way, I had a meeting with our British colleagues in this same room), they want to work with us, they are working with us and intend to continue doing so. And we support this intent," he said.

Russian President also said that the case with the poisoning of ex-Russian spy Sergei Skripal was not worth serious relations between states.

"Listen, all this fuss about spies and counterspies, it is not worth serious interstate relations. This spy story, as we say, it is not worth five kopecks. Or even five pounds, for that matter. And the issues concerning interstate relations, they are measured in billions and the fate of millions of people. How can we compare one with the other?" Putin said in an interview with the Financial Times newspaper.

"As a matter of fact, treason is the gravest crime possible and traitors must be punished. I am not saying that the Salisbury incident is the way to do it. Not at all. But traitors must be punished. This gentleman, Skripal, had already been punished. He was arrested, sentenced and then served time in prison. He received his punishment. For that matter, he was off the radar. Why would anybody be interested in him?" the president added, stressing the need to leave the Skripal story alone and let security agencies deal with it.

Relations between Russia and the United Kingdom have been de facto frozen after a March 2018 attack on Skripal and his daughter in Salisbury. London blames Moscow for the attack but Moscow has repeatedly refuted the accusations as baseless.