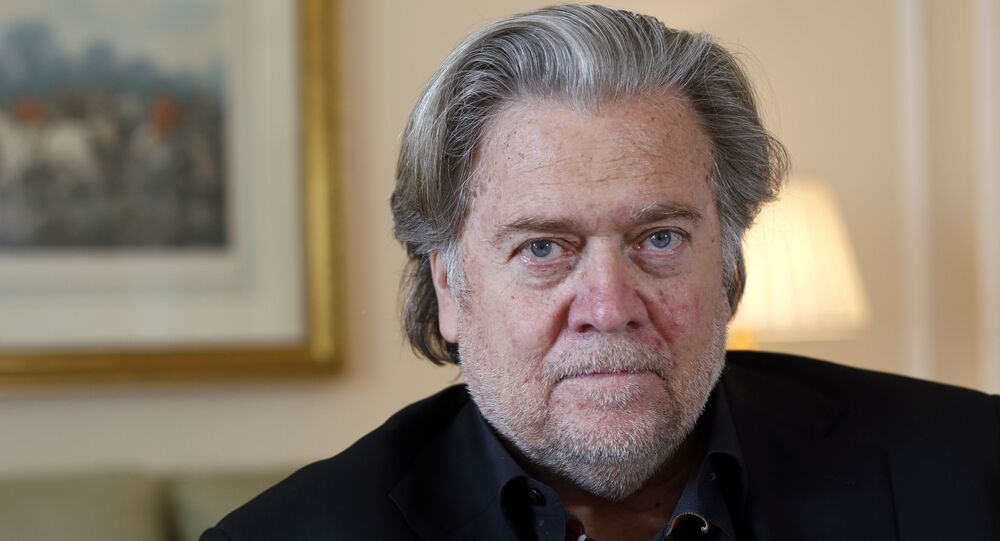 Former British foreign secretary and now one of two candidates for the post of UK prime minister, Boris Johnson, previously dismissed claims of being linked "with" Donald Trump's former chief strategist Steve Bannon, although acknowledged knowing him in person.

Former chief strategist for the US president, Steve Bannon revealed in a video, obtained by The Observer that he helped former British Foreign Secretary Boris Johnson to prepare his speech in the House of Commons following the latter’s resignation from the British government over Brexit disagreements. In that speech, Johnson specifically ripped Prime Minister Theresa May's plans for withdrawing the UK from the European Union.

In the video that was shot by US filmmaker Alison Klayman for a 2019 documentary called "The Brink", but which was never published, Bannon says he discussed the speech’s main point with Johnson and gave him some key advice on how to improve it.

"I’ve been talking to him all weekend about this speech. We went back and forth over the text. Talked to him initially over the phone then it’s just easier to go back and forth on text", he said.

Bannon reminded the former British foreign secretary of his June 2016 pro-Brexit speech, which he called "magnificent", and suggested Johnson should incorporate the topics he raised then in his post-resignation speech in the House of Commons.

Boris Jonson's spokesman commented on the video for The Guardian by saying that any claim of Jonson "colluding with or taking advice from Bannon […] is totally preposterous to the point of conspiracy".

Reports of ties between the former foreign secretary and Bannon first surfaced last year, but Johnson denied being "associated with" Trump's former chief strategist, but confirmed he had met the man during his tenure as a UK minister.

Johnson is currently leading the race for the post of UK PM having gained over 50% of during the last vote. He will be competing against current Foreign Secretary Jeremy Hunt on 27 June, when around 160,000 Tory party members will cast their ballots to determine the next prime minister.

Since his departure from US President Donald Trump's team, Steve Bannon has been actively trying to promote a project called The Initiative aimed at helping right-wing parties secure leadership in Europe. He notably worked with the UK Independence Party and its leader Nigel Farage.

Is Steve Bannon Out of Friends in Washington DC, or Will He Be Back?