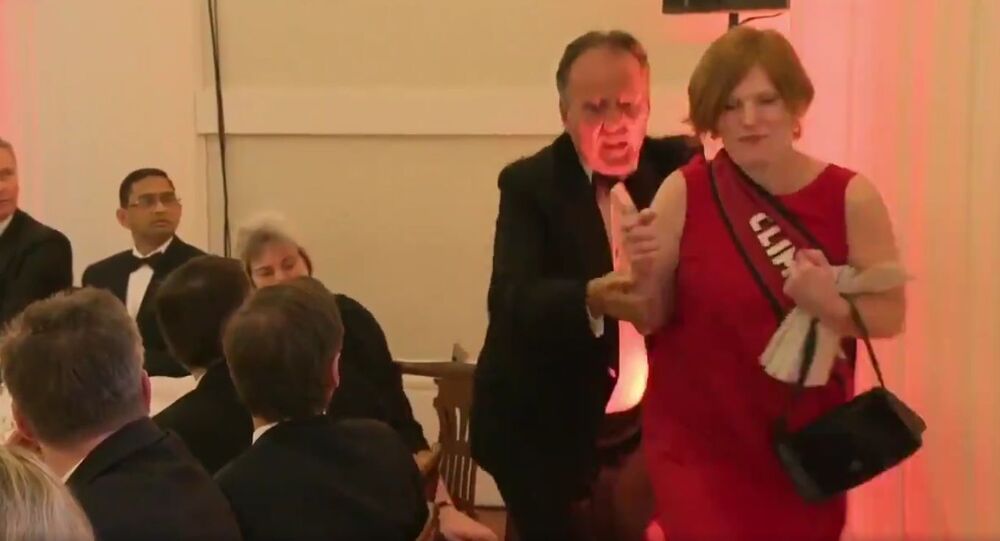 Mark Field landed in trouble after he manhandled a female environmental actvist at a black-tie event in the City of London. He said he feared the woman might have been carrying a weapon but still referred himself to the Cabinet Office.

A spokeswoman for UK Prime Minister Theresa May said that Mark Field, who has been serving as Minister of State for Asia and the Pacific at the Foreign Office since 2017, has been suspended from his job pending an investigation into his disturbing encounter with an intruder at a posh bankers' dinner.

"The prime minister has seen the footage and she found it very concerning," the spokeswoman said on Friday.

The woman was one of several dozen Greenpeace protesters who interrupted a speech by Chancellor of the Exchequer Philip Hammond; she was passing behind Field's chair as he suddenly stood up and grabbed her by the neck to march her away. Field later explained that he'd acted so out of security concerns.

"There was no security present and I was for a split-second genuinely worried she might have been armed," he said. "As a result I grasped the intruder firmly in order to remove her from the room as swiftly as possible."

Several Labour and Tory lawmakers have called on the government to sack Field, while outraged activists launched an online petition demanding the same, which has racked up over 8,000 signatures as of the writing.

Following the public backlash, he went on to refer himself to the Cabinet Office to investigate whether he had breached the ministerial code of conduct.