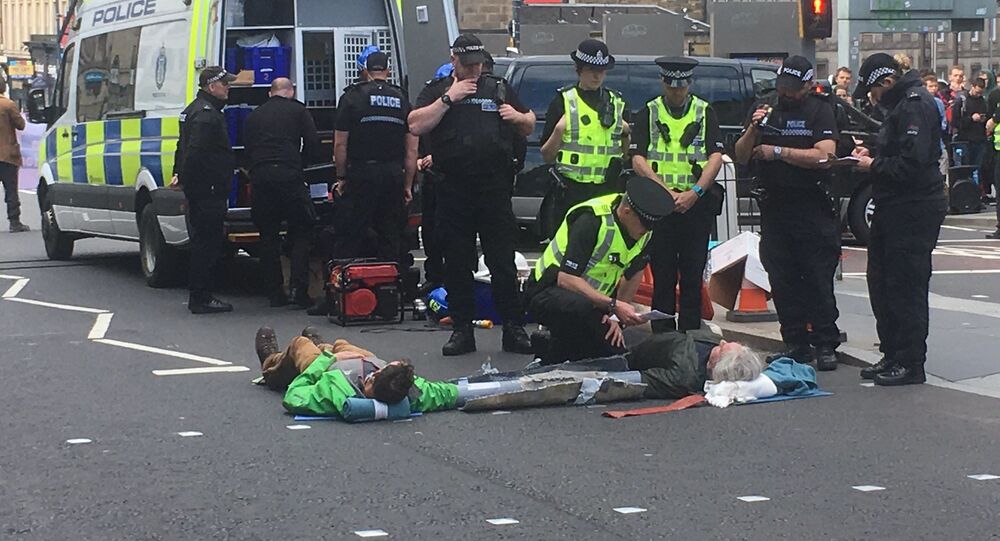 Climate change campaigners have camped outside the Scottish Parliament in order to pressure the government to do more in relation to what they describe as an "ecological breakdown".

Activists from the climate change protest group Extinction Rebellion have been arrested after blocking several major roads in Edinburgh as part of a five-day protest outside the Scottish Parliament.

#ConscientiousProtectors being cut out of their lock on and arrested. 3 so far. 2 more arrested after police searched their bags. #HolyroodRebelCamp pic.twitter.com/LvZbzzrkCK

Some participants of the "targeted action", launched ahead of the Climate Change Bill debates this month, were captured lying on the road and locking themselves down using tubes.

Police reading rights to protesters: 1 officer is filming on a film camera. pic.twitter.com/p7eyZZrwZR

They have set up a rebel camp outside the parliament and said that the protests, which kicked off on 16 June and will last until 20 June, will feature "actions of civil disobedience and risk of arrest" in a show of "non-violent direct action".

"Unfortuntalety this is what we have to do, to make people realise what's going on, and to wake people up. I have grandchildren, aged 2, and I want to be able to tell them in the future, that I tried to do something in regards to the climate. We are in a state of emergency, and we need the politicians to listen. The fact that this is happening. People are upset, businesses are effected. That gets back to the politicians, and then something will be done, because their constituents are not happy about Extinction Rebellion causing bother", Christine, an Extinction Rebellion activist, explains.

Protesters are chained together. In order to arrest them, police are using angle grinder to cut the chains. People are singing on the sidelines. Extinction Rebellion, Lothian Road pic.twitter.com/nRsi6Jmzot

The activists have called on the Scottish government to take action against a "climate crisis and ecological breakdown", saying that the Climate Bill is "inadequate" to address the plight.

Traffic is chocka block in central Edinburgh, due to diversions from Extinction Rebellion protests. pic.twitter.com/x7b1iDTTGk

Even though the campaign was launched for a good cause, ordinary passers-by didn't appreciate the blockade:

"It’s pointless! Where’s the politicians they are trying to target? They’re not here on Lothian road, the people they are disrupting are not politicians but hardworking citizens. Of course we care about the climate too, but I want to go home and they are not making it possible", says Pat, a woman who couldn't get through because of the road block.

Following weeks of strikes by school pupils and protests by Extinction Rebellion in London and Edinburgh earlier this year, First Minister Nicola Sturgeon declared a "climate emergency", describing Scotland as a "world leader" on climate change that is already committed to being carbon neutral by 2050.