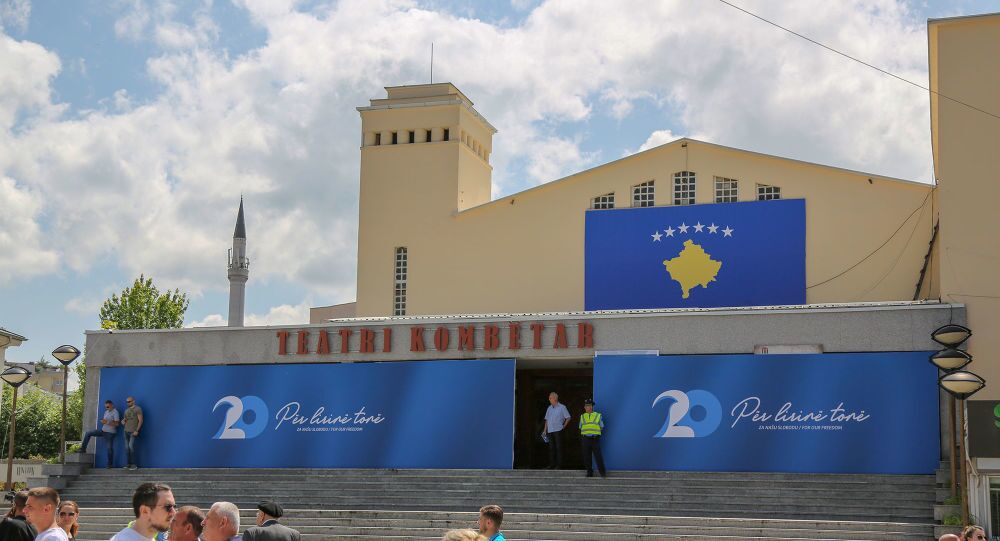 Kosovo: Land of the American Dream, Where Clinton and Albright Are Still in Power

The former US President and Secretary of State, “the heroes of Kosovo” who have monuments and streets named after them in Pristina, have come to congratulate the Kosovo Albanians they saved from the “barbarism of the Serbs” 20 years ago.

According to them, Kosovo is a prosperous civilised country, which is an example of the triumph of democracy and economic well-being; basically a Disneyland. What do Kosovo Serbs who are “lucky enough” to live in this fabulous land think about this?

Sputnik has visited Pristina and Gracanica, a Serbian enclave near Pristina, and looked at how people work and live there.

© Sputnik / Dejan Simic
The flags of America and Kosovo in Pristina

The current Prime Minister of Albania, Edie Rama, and US Assistant Secretary of State Matthew Palmer, who came to congratulate the citizens of the self-proclaimed republic, either as a representative of the current Trump administration or as a deep state representative, also used this “time machine” to travel back to the Clinton era.

The leaders of the partially recognised Kosovo and their distinguished foreign guests have painted a picture of the fantastic prosperity and progress of “Europe’s youngest state”. The American guests solemnly called Kosovo a champion of democracy, human rights and multi-ethnicity, noting its “incredible progress”; they also called Kosovo one of the “few European countries demonstrating economic growth” and noted that Kosovo has become “a full member of the family of civilised nations”.

Madeleine Albright was awarded an order and given a monument in Pristina [according to some observant Serbs, the monument very much looks like the Tito monument]; then she said that the forces that were fighting for democracy and human rights during the 1999 NATO operation had defeated the “barbarians”. The monument to Bill Clinton has been in the capital of the self-proclaimed republic for 10 years already, since 2009; one of the city’s central boulevards has been named after him. And now he also has the Kosovo Order of Freedom. “You are our hero”, Kosovo’s President Thaçi told Clinton while awarding him the order.

“You’d better not ask me, anyway, I can’t say what I want in front of the camera...” a passerby said when asked what he thought about Clinton, Albright, Clarke and Palmer’s words about how lucky he was to live in Kosovo. Frankly, Sputnik faced more than one refusal to comment on the state of things in the province because of the inability to choose words fit for use in the media.

“Today, people gathered in Pristina who contributed to the fact that the terrorist organisation has turned into a legal authority [of course, Serbia, Russia, China and other countries that don’t recognise Kosovo don’t consider it legal]. Clinton and Albright are the mother and father of Thaçi and Haradinaj”, one of the people in Gracanica’s streets told Sputnik.

“Albright and Clinton should come to the countryside to see how Albanians live, not to mention us, the Serbs. They have caused us tremendous harm, and haven’t done any good to them; but they don’t dare to speak about it. I know some old-time Albanians, who I was at school with and played football with; it’s them that I’m telling you about. I think they would hardly agree that they live in a prosperous country”, another passerby said.

Another Gracanica resident argued that ordinary Kosovo Albanians who have nothing to do with the authorities and criminals, which, according to him, are the same thing in Kosovo, live no better and sometimes even worse than Kosovo Serbs. When asked about the many new houses that can be seen on the road from Kosovska Mitrovica to Pristina, he said that almost all of them were empty:

“Go this way and see. Everywhere the blinds are down; everyone has gone abroad”.

Some of Sputnik’s interlocutors are wondering what “these murderers who bombed us” want with the Serbian land:

“Let them take care of their country, and not help the Albanians. They are real killers. There’s nothing from democracy, not even a letter. This is all a lie. What democracy are we talking about? No one was imprisoned [Not quite so, several minor Kosovo Liberation Army members were imprisoned by the Hague Tribunal for a short period of time and were released early]. Thaçi’s and Haradinaj’s arms are blood-stained up to their elbows…”, one woman said.

Many Gracanica residents wonder how there can be a multi-ethnic society with such pressure on Kosovo Serbs, who are literally being pushed out of their native land by all means.

Even very young people in a café, claiming that they aren’t interested in politics and, apparently, born after the 1999 bombing, consider Clinton and Albright’s visit a provocation for the Serbs.

“Why have they come? Well, probably, to share the money”, a young expert from a Gracanica coffee house suggested.