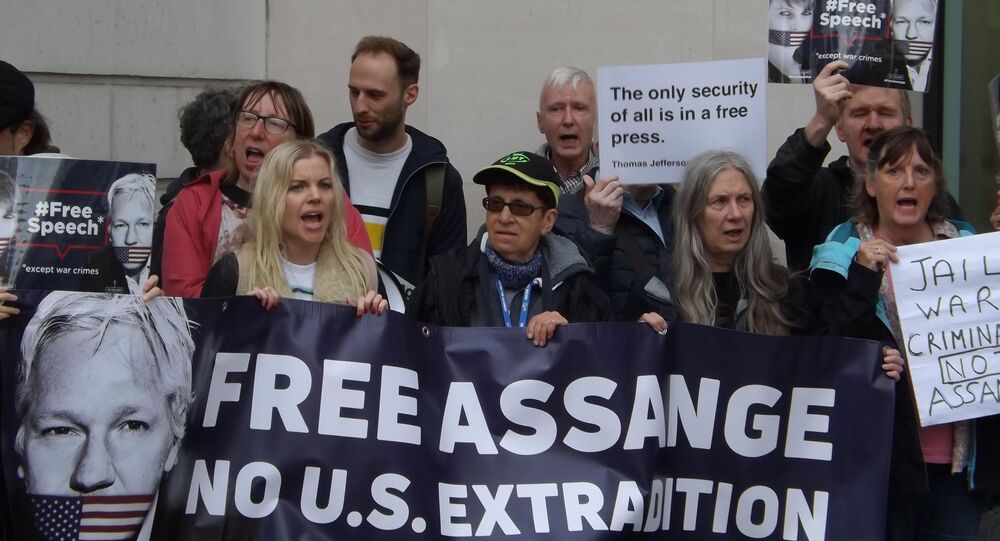 If extradited, Assange could face up to 175 years in a US prison on 18 espionage-related counts for publishing hundreds of thousands of documents on whistleblowing website WikiLeaks.

Demonstrators gathered in front of Westminster Magistrates’ Court in London, where Wikileaks founder Julian Assange attended a court hearing via live stream on his potential extradition to the US.

Protestor Lashes Out at Mainstream Media, Accuses Them of ‘Smearing and Slandering’ Assange

A demonstrator addressing the media at the rally on Friday said that Mr Assange’s hearing was the day that journalism was “being put on trial” and that the mainstream media was not present when Assange had been “kidnapped and dragged out of the Ecuadorian embassy,” adding that “it was the Russian media that had reported it”.

He spoke of how mainstream media had “smeared and slandered” Assange, stating that they were “all responsible for what has happened today” and accused them of having ‘blood on their hands’.

He added that when whistleblower Chelsea Manning had leaked her trove of documents to Assange in 2007, all the Wikileaks founder had done “was the job of a publisher”, adding that the journalist was going to be put on trial for “exposing war criminals as war criminals”.

He urged the mainstream media to “do a U-turn and repair some of the damage” it had caused to Assange.

“The fourth estate is extremely important and you know this, this is why journalism is such a noble profession,” the protestor said. “You are supposed to hold power accountable, not to shuffle to power and repeat propaganda. Otherwise, you are just the establishment’s PR firm”.

Speaking to reporters, Australian filmmaker John Pilger said that he had seen Julian Assange in Prison and he had “lost a great deal of weight” and “couldn’t keep his food down”.

“I understand this has stabilised since then,” Pilger said, adding that “he is still in the hospital wing of Belmarsh Prison”.

As Julian #Assange's extradition hearing opens, here are two contributions that highlight the critical importance to freedom of the #Assange case. Whose side are you on? they ask of journalists and all of us. It's time to choose.https://t.co/Na1pjev28ghttps://t.co/lgajqbPB2g

“This is a man who saw no life for almost seven years and then was dragged out of the embassy, violently dragged out and pitched into a maximum-security prison, and his crime was an infringement of bail if, we call that a crime", he said.

One protester said that Friday’s hearing would only be “a procedural hearing” and that there would be any arguments, but prosecutors would just “be filing papers”.

“What we hope to achieve is to increase the public pressure to free Julian Assange,” Mr Brack said. “And only by public pressure will anything happen in his favour. If it is left to the judiciary, the government and the police they will have him on a plane to America as soon as they can.”

‘We Will Be Betraying Assange, Journalism’ if We Don’t Fight His Extradition – UK Hacker Lauri Love

UK hacker Lauri Love, who has Asperger’s Syndrome and made headlines after he was charged with stealing information from US government computers in 2013, said that US authorities wanted to extradite himself for allegedly committing crimes to prosecute him in the US, “and the same applies to Julian”.

“He is not accused of breaking US law by being in the US, he is accused of journalism, of the crimes of informing the public of important things that we have the right to know of,” Mr Love said.

Mr Love said that UK law was “not a fair process” and was “biased towards extradition to the USA” after the US-UK Extradition Treaty in 2007 was forged under then Prime Minister Tony Blair so that the US was not required to "substantiate any evidence whatsoever”.

“So you can expect the claims made in the extradition request and in court [were] to not be contested or evidenced, and the only defence possible is not to be based on the facts, but procedurally,” he said.

Love added that it would be a “gross violation” of Julian Assange’s human rights to be extradited as he had faced similar conditions such as “horrific prison conditions that had been roundly condemned by experts in the United States and around the world” which were tantamount to torture, which would significantly impact Assange's ill health.

9) but it seems possible that he may be out of Belmarsh in fall. Certainly this means better access to legal team to prepare defense. Likewise, Assange lawyer requested addition time to prepare what they insist is a "complex case" dealing with such "profound" issues including...

“This is definitely, beyond a shadow of a doubt done by denying [detainees] fresh air, sunshine, any social, contact whatsoever in addition to being placed under suicide watch,” Love said. “It is torture, there’s no other word for it”.

Mr Love added that Mr Assange was “not facing anything that could ever be considered a proportionate sentence, especially as I don’t think that he’s committed any crimes whatsoever,” but was facing a live sentence of “over 170 years”, adding that US authorities would not grant Assange bail as extradited fugitives would “automatically be considered a flight risk” and likely held in “pretrial” conditions “in horrific, inhumane conditions”.

"We have a duty and obligation to continue fighting,” a teary Mr Love said. “And through fighting, we will succeed again, we will be victorious. Julian Assange will not be extradited to the US, because if he is, none of should be able to live with ourselves".

An emotional Lauri Love, who fought and won against extradition to the US, says if Julian Assange is sent to the US 'none of us should be able to live with ourselves'. pic.twitter.com/pIPEmYAjbw

He added that citizens did not “have the luxury of being a spectator and a bystander, or exempting yourself from this process as if it is out of your hands”.

“Nothing is out of the hands of people that come together and stand up for what’s right,” he added.

“We will fight today, we will fight at every hearing, in between hearings, to save Julian from being handed over to his oppressions and his persecutors who want to punish him for revealing their crimes,” Mr Love said, adding that by stopping Assange’s extradition “we will be ultimately upholding the values that we all believe in and our ability to live in a free society.”

Wikileaks founder Julian Assange claimed asylum at the Ecuadorian Embassy in London 2012, citing fears he would face cruel and unusual treatment in the US if extradited. But Mr Assange was forcefully arrested from the Knightsbridge-based compound on 11 April and is currently serving 50 weeks at Belmarsh Prison for skipping bail. The activist and whistleblower was transferred to the prison’s hospital wing after losing weight, undercover footage from RUPTLY revealed. UK Home secretary Sajid Javid also signed a formal request to extradite Assange to the US on Thursday, prompting international outcry.