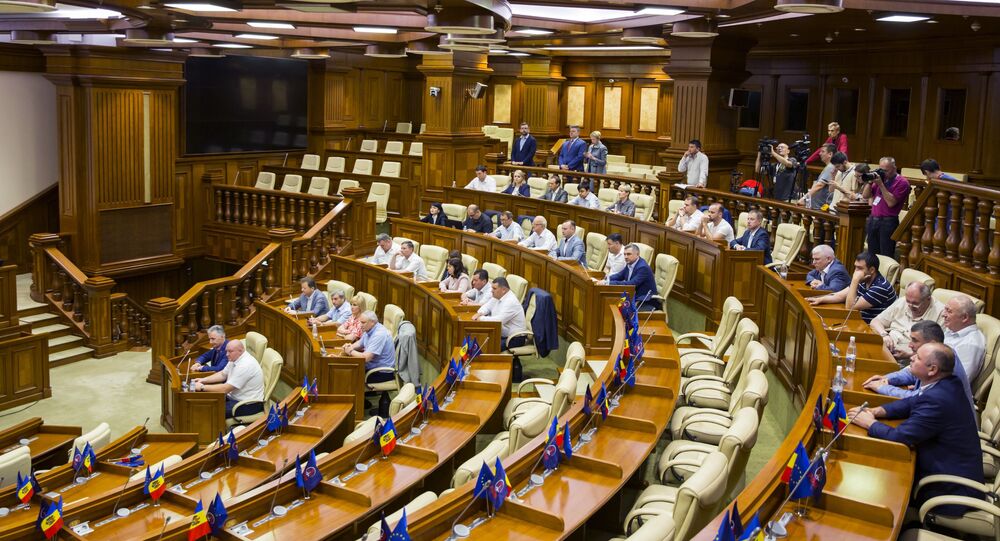 MOSCOW (Sputnik) - The Democratic Party of Moldova decided at a meeting of the National Political Council on Friday that the government of Pavel Filip dismissed by President Igor Dodon will have to resign, the party's deputy chairman, Vladimir Chebotar, said.

"The Democratic Party decided that the Moldovan government headed by Pavel Filip is resigning from today," Chebotar told reporters at a briefing.

Democrats suppose that such a move will help solve the political crisis in the country.

However, the government of former Prime Minister Maia Sandu, whose appointment has been endorsed by the Party of Socialists and the pro-EU ACUM bloc and ruled unconstitutional by the court, will still have to find a legal way to gain power again, Chebotar said.

He also stressed that his party remained open to the dialogue with the majority and was ready to share its ideas about how it could restore power legally.

According to Chebotar, the Democrats' decision on Filip's cabinet was of a political nature but did not solve the juridical conflict as the Constitutional Court's decision to transfer power presidential powers from Igor Dodon to Filip remained in force. In this regard, Chebotar said, early elections were still likely to take place in near future.

Chebotar added that the Democrats wanted to avoid violence and escalation of the political conflict and called upon the DPM supporters to accept the decision of the party and remove the tents the protesters have installed near the entrances to the governmental headquarters, the Constitutional Court and several ministries.

After the indecisive February parliamentary elections and three months of political stalemate, the Party of Socialists and right-wing pro-European bloc ACUM signed a cooperation agreement on June 8 to form a new government. Sandu was elected prime minister by the two parties. The Moldovan constitutional court ruled the parliamentary agreement unconstitutional.

Under the Moldovan constitution, the parliament has 3 months to form the government. If it fails to do so, the president has to dissolve the parliament and to hold new elections. The constitutional court ruled that the deadline for the legislature to form the government was June 7 and the bipartisan agreement on Sandu's appointment came one day later.

The court also ruled on June 9 to transfer the presidential powers of Dodon to former prime minister Pavel Filip so that the latter could dissolve the parliament and call snap elections. Dodon promptly annulled the decision.