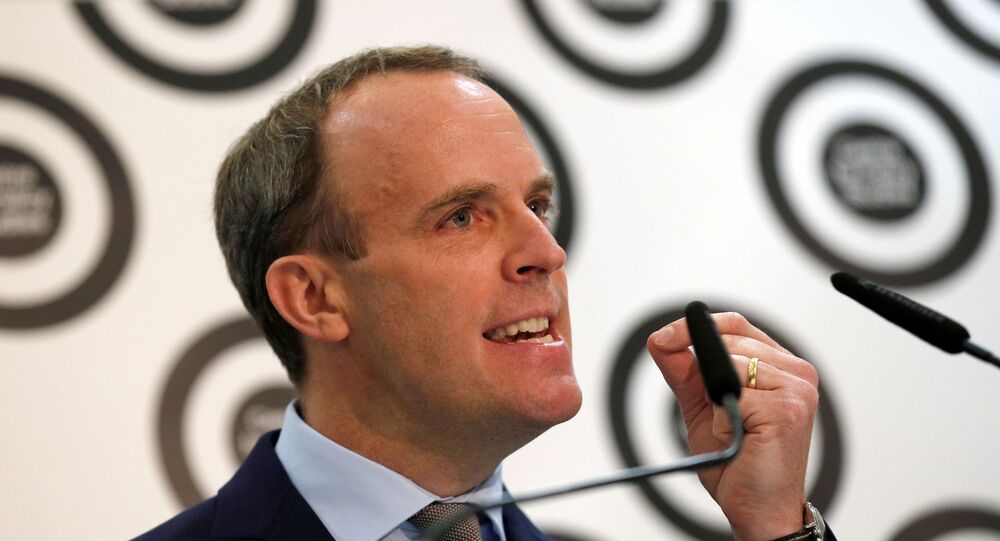 Theresa May is stepping down as leader of the Conservative Party, kicking off the leadership contest. There are currently 11 contenders but only two will make it through to the final ballot.

UK Prime Minister Theresa May has formally resigned as leader of the Tories and will become a caretaker prime minister until a new leader is declared on 22 July.

On Friday, 7 June, Mrs May submitred a letter to Charles Walker and Dame Cheryl Gillan, the joint acting chairmen of the 1922 Committee of backbench Conservative MPs.

After months and months and months, and various attempts to oust Theresa May it is now, officially for her as leader of her party, over - a whimper of a huge moment pic.twitter.com/ncthYI3DpQ

​They then made a formal call for candidates, with the deadline closing at 5pm on Monday, 10 June.

Nigel Farage is currently on Downing Street delivering a list of his demands for Brexit to Theresa May, who isn’t there.

Suspect this particular stunt was planned when they thought they were going to win last night’s by-election.

​Eleven candidates have so far thrown their hats into the ring but some, like Esther McVey, Rory Stewart and Sam Gyimah, are struggling to get the backing of eight MPs which is necessary to make it onto the first ballot on 13 June.

If you were Theresa May, and it was your last day in office today, what would you do?

The two candidates who make it through to the end with the most votes will end up on a ballot paper which will be sent out to 100,000 members of the Conservative Party around the country.

Astonishing that all the journalists & commentators who are smearing our man, suggesting he’ll back a second EU referendum & such, are all those that most strongly oppose him becoming PM.

They will literally do anything to get Anyone But Boris (ABB).#BackBoris #Boris4PM 👍🏻

​They will choose which of the two will be the party’s new leader and therefore the next prime minister, who will take office at the end of July, three years after Theresa May took over from David Cameron.

The new prime minister, who will take office only thanks to the support of the 10 MPs from Northern Ireland’s Democratic Unionist Party (DUP), must then decide what to do about Brexit.

So who is most likely to make it onto the ballot paper?

.@DominicRaab when you close down a debate and Parliament, you’re closing down our democracy. 60m+ people with no representation on anything. The ultimate anti-democrat move. That’s not taking back control it’s taking away control.

​Boris Johnson, 54, has been the hot favourite for the job ever since November 2018 when he played a key part in blocking the approval by Parliament of Mrs May’s negotiated Brexit deal, with its infamous Northern Ireland backstop.

He remains in a strong position to make it through to the final two, especially after an embarrassing private prosecution over alleged lies told during the 2016 Brexit campaign was thrown out by the High Court on Friday.

Last night’s result shows yet again that we must get on and deliver Brexit by the end of October. Failure to do so would not only break our promise to voters, it risks delivering Jeremy Corbyn by the backdoor.

​But Johnson has made a lot of enemies in the House of Commons since he was elected in 2010 so there will be a strong desire within certain elements of the party to have a good “anyone but Boris” candidate.

If McVey, Stewart and Gyimah fail to get eight MPs each to support them they will not make it onto the MPs’ ballot on 13 June.

The High Court judgment in the failed prosecution of Boris Johnson will be published shortly. Hard to comment til then.

However to help Twitter, this is what it definitely *won’t* say:

- Johnson is exonerated
- It’s morally ok for politicians to lie

Those were not the issues.

​Raab's suggestion at a hustings on Wednesday, 5 June, that he would be prepared to shut down Parliament to ensure the UK leaves the EU on 31 October was criticised by some of his rivals, but it is an idea which may prove popular among Tory Party grassroots members, who are largely pro-Brexit.

Gove is known as a great intellect and has a strong Brexit pedigree - he was in the vanguard of the Leave campaign long before Johnson - but is not perceived to be a great vote winner and is unlikely to make it through to the final two.

Very glad to see the court case against @BorisJohnson thrown out. Freedom of speech feels increasingly challenged - we should always seek to debate political arguments in the open rather than close them down https://t.co/OGHupcjmDT

​Hunt and Hancock are both seen as Theresa May loyalists and as men who are inherently in favour of only a soft Brexit, which may damage their chances.

So it seems likely that Raab, 45, will be carrying the torch for the “anyone but Boris” wing of the Tory party when it comes to balloting members.

Labour Party leader Jeremy Corbyn said: "I don't know who the new leader is going to be, but it seems to be a choice between no deal, no deal and no deal, as far as I can understand it."