The website recalls the key witness was sentenced to prison for fraud and sex offences against a minor. They also disclosed in a press release that the hearing on Assange’s extradition to the US was postponed to 14 June – the day of the extradition request deadline.

The US Department of Justice has prepared additional charges against WikiLeaks founder Julian Assange based on testimony by a convicted conman Sigurdur Thordarson, a WikiLeaks press release published on Twitter says.

Last week Thordarson was flown to the US where he was "comprehensively interrogated" by US officials, the press release says citing Dutch public broadcaster NOS.

Earlier in May, FBI Special Agent Megan Brown, who is leading the investigation against Assange, and prosecutor Kellen Dwyer reportedly, flew to Iceland to speak with Thordarson with the help of Icelandic police.

"The Trump administration is so desperate to build its case against […] Assange that it is using a diagnosed sociopath, a convicted conman and sex criminal, who was exposed by the highest levels of the Icelandic government as an FBI informant and who was involved in an entrapment operation in 2011 against Julian Assange", WikiLeaks editor-in-chief Kristinn Hrafnsson says. 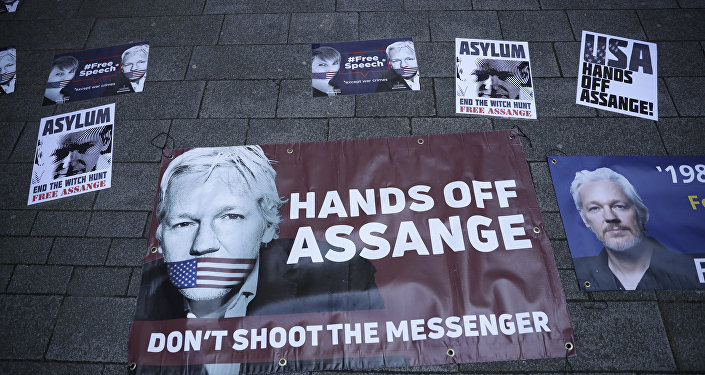 © AP Photo / Matt Dunham
Assange's Prosecution by US a Disaster for Human Rights, Intl Law - Physician
According to the press release, Thordarson was recently released from prison, where he served a three-year sentence for "multiple counts of embezzlement and fraud, including against WikiLeaks, and sex crimes against nine minors".

"Thordarson stole tens of thousands of dollars from WikiLeaks, and impersonated Julian Assange in order to carry out the embezzlement", the document says.

The man underwent a psychiatric examination as a part of criminal prosecution, and was diagnosed as a sociopath, WikiLeaks said.

WikiLeaks claims that Washington's reliance on such unreliable sources as Thordarson and his fellow FBI informant Hector Monsegur could destroy the case inside the US. However, the US has an option to conceal the names of its sources in the extradition request making it impossible for Assange to challenge the credibility of the witnesses, the document says.

© AFP 2019 / Daniel LEAL-OLIVAS
Swedish Court Rejects Prosecution's Request to Arrest WikiLeaks Founder Assange
The document underscores that the previous Icelandic administration had expelled several FBI agents over unauthorised activities on Icelandic soil against Assange and WikiLeaks. By contrast, the current administration appears to be collaborating with Washington's efforts to build a case against WikiLeaks.

Hrafnsson sent a formal letter to a number of high-ranking Icelandic officials, including the prime minister, foreign minister, and general prosecutor demanding an explanation for Iceland's cooperation in "what is widely recognized to be US-led political persecution against foreign members of the press, including Icelandic citizens".

The first substantive US extradition hearing, previously planned for 12 June has now been moved to 14 June. The hearing will be in Belmarsh Magistrates’ Court.