The infamous Baby Blimp looked down on Dublin today, at a protest being held in opposition to Trump’s visit to Ireland. Thousands marched through the central O’Connel Street, baring soggy banners as the rain poured down on the protest.

The giant inflatable does not "soar", so much as hover, suspended by ropes held down with sandbags. Organisers of the rally sought special permission from the Irish Aviation Authorities in order to fly the balloon, which earlier this week, was star of the show at protests in London.

The protest was being held in opposition to Trump’s visit to Ireland, as he flies back into his luxury resort for a game of golf, after attending the D-Day commemoration in Normandy, France. Speakers from "Veterans for Peace", "Extinction Rebellion Ireland", and a local pro-Palestinian group headed the rally, riling up a crowd estimated at about a thousand people strong. 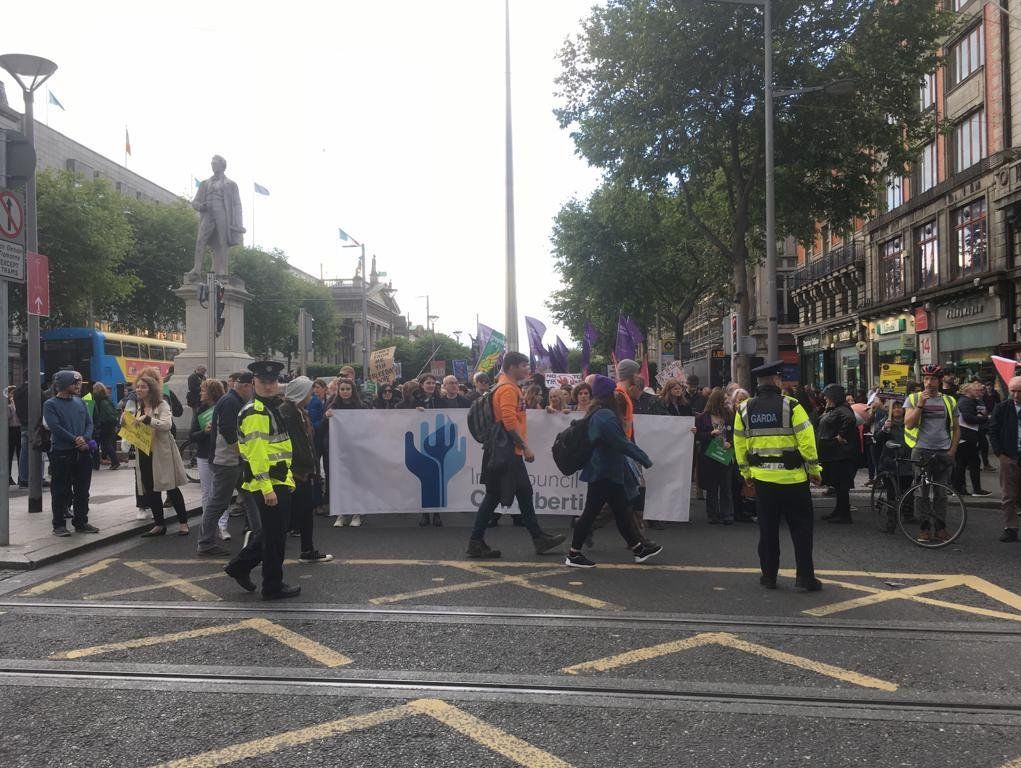 Artistically speaking, the star of the demonstration was a giant papier-Mache Trump head. Worn by a rather spindly man in comparison, the model sported a full head of very realistic hair. A radioactive shade of orange, the Trumpian pastiche grinned manically, like an oversized bobble-head.

Many of the banners targeted Trump’s resort on the other side of Ireland, which sits on the beach next to its own luxury golf course. "Tee Off", read one woman’s hand-made creation. Whilst another man sported a "Fore More Years Is all we’ll have," incorporating a classic golfing pun. The latter is meant to refer to Trump’s withdrawal from the 2015 Paris Agreement, of which bearer Simon Reeve says will have "devastating impacts on the planet and our habitat."

As has become the norm with anti-Trump protest, which frequently bow back to toilet humour and rude words, there were a fair few non-PG, non-PC messages plastered upon the sea of banners. Aside from the now staple, Trump’s a *four letter word*, a few protesters took the opportunity to get creative with their slogans. One woman, named Kate McGrew, took the time to explain the meaning behind her message, which at first glance appeared to be a brash concoction of insults, but was actually a comment on one of the US President's policies.

McGrew is director of the Sex Workers Alliance in Ireland. Her sign, she explains, refers to Trump’s criminalisation of the sex industry in the US.

"Trump brought a ban to the advertising of sex work online in the US. It made it so that these people advertising were forced back to their pimps, back onto the streets. Even in Ireland, we’re facing a similar criminalisation of sex work...That, is why, you couldn’t pay me to *beep* on Trump," McGrew said.

Marching through the city, the demonstration received its fair share of criticism from passers-by. One group of young men stood at the side-lines chanting: "We Love Trump" - others took a more politically educated standpoint, like Nan, from Dublin, who argued that as "the democratically elected President of the United States, Trump has every right to come and visit." Nan criticised the protest, saying that the majority of attendees were just "following the crowd", as according to her, disliking Trump is "the done thing of the generation."

As the rain tumbled down, and the marchers marched, Donald Trump himself was touching down on the West Coast of the island. Yesterday, he was welcomed by hundreds of the residents of Doonbeg, the village where his golf course is situated. The residents of Doonbeg have a polarised attitude to Trump to those protesting his arrival. Welcoming the president with US flags and MAGA hats, residents pulled pints of beer at the local pub with Trump’s sons, Eric Trump, and Donald Junior. The brothers surprised the residents with a visit, and a few rounds on them, calling the residents of the Doonbeg parish "the best neighbours in the world."

It seems as though, whichever side of the wall you may stand, Trump’s presence on the Emerald Isle has brightened up what might have been a rather dreary mid-week in Ireland. MAGA hats, or radioactive orange Trump disguises, there is a certain sense of community on both sides of the Trump debate. It’s a lot more interesting than a game of golf, that’s for sure.