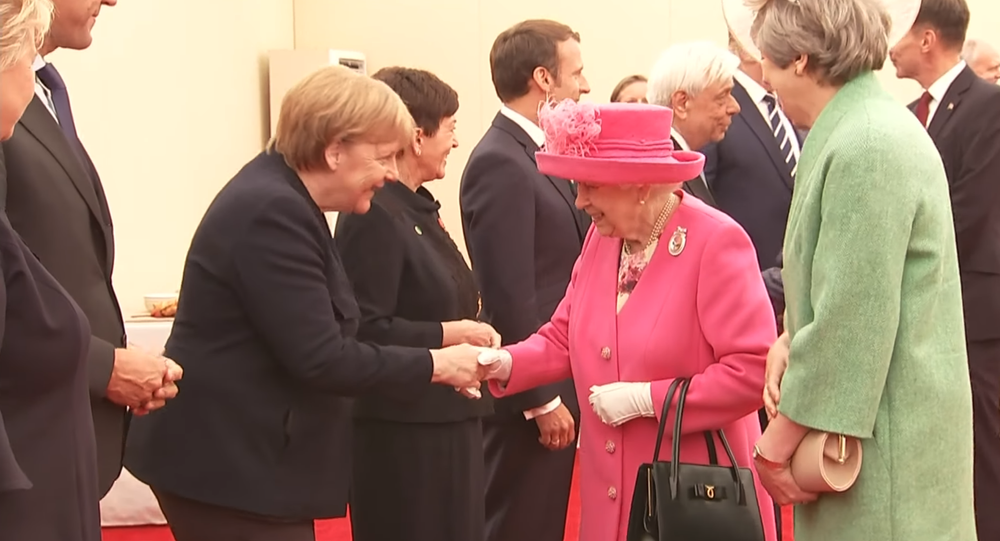 In an embarrassing gaffe on Wednesday, the British Royal Family’s Twitter account posted photos of Queen Elizabeth II meeting with world leaders it identified as “representing the allied nations that took part in D-Day.” However, one of them was German Chancellor Angela Merkel - now a British ally, but in 1944, the Allies’ fiercest foe!

© AP Photo / Matt Dunham
Twitter Lampoons Theresa May for D-Day Date Mixup as World Leaders Honour Event
Today, Germany may be a key part of the NATO alliance with the US, France and UK, but way back in 1944, it was German soldiers manning the machine guns on the beaches onto which Allied forces stormed. The Royal Family's Twitter account seemed to forget that Wednesday, when it tweeted out images of the queen meeting leaders from various European and North American countries present for the D-Day commemoration ceremonies in Britain and France this week.

"The queen was introduced to leaders by the Prime Minister @10DowningSreet — each representing the allied nations that took part in D-Day," the now-deleted tweet read. Of course, one of those leaders was the German chancellor, who represented a nation that did not play the role in 1944 that is suggested by the tweet.

​Perhaps even more hilariously, the account deleted the gaffe post and put up a new one about the meet-and-greet. However, the caption still conveys the same general message — that the monarch met with representatives from Allied Nations — and the photos are carefully framed so as to exclude Merkel!

The Queen and The Prince of Wales met representatives from the Allied Nations before watching performances to honour the sacrifices made by Allied forces during the assault on Nazi-occupied France, which would lead to the end of WWII. pic.twitter.com/YUkQ4PYgoZ

​Of course, as one Twitter user noted, Germany did play a key role that day: without Germany, there could not have been a massive Allied amphibious invasion aiming to liberate France and the Low Countries.

Without Germany, D-Day would never have been accomplished!

​The commemoration ceremony reflects the reality of modern geopolitics in more ways than just giving Merkel a friendly welcome and accidental inclusion on the Allied side: Russia and China are absent from the ceremonies, even though they were key Allied Powers and bore the brunt of the war, suffering an appalling human cost to defeat the Nazi coalition.

#DDay75 as we honor the #GreatestGeneration it's important to remember that once upon a time, we (#USA) worked side by side with #Russia & #China and the world was better for it. #Trump #Diplomacy #WWII #WW2 #HonorTheFallen pic.twitter.com/3DwmngKQ35

​However, today it's Russia and China that are regarded as "revisionist powers" by the US, supposedly seeking to upend the world order in which the countries whose leaders met the queen on Wednesday get to call the shots. A wave of Russophobia and Sinophobia has swept across the West, in which Chinese companies are seen as threats to national security and Russian plots and agents are to be found in every crevice and shadowed corner.

Late last month, Sputnik reported that collectible coin maker The Bradford Exchange had issued a commemorative coin in honor of the Allies who won World War II: that coin had the US, UK and French flags on it, but not the flag of the Soviet Union or its successor state, Russia. China, too, was absent.

So what were those nations doing during the D-Day invasions, anyway? As it turns out, they were playing key parts in the Allied war effort.

In early June 1944, the Soviet Union was drawing to a close the offensive operation that had lifted the 900-day siege of Leningrad that January. The attack pushed the Germans and their allies back as far as Lake Peipus, on the border of the Estonian SSR. The operation laid the ground for the Soviets' contribution to the D-Day landings: the massive offensive to liberate Belorussia and destroy German Army Group Center that was dubbed "Operation Bagration" after a Russian prince who died fighting Napoleon in 1812. The battle lasted until August and took the Red Army to the gates of Warsaw, completely destroying one third of the German army in the east — at the cost of 770,000 Soviet citizens' lives.

Eighty percent of German material and human losses in the war were suffered on the Eastern Front, and the Soviet Union suffered 50 times the lives lost by either Britain of the United States: an estimated 27 million killed, compared to 565,000 by the US and 450,000 by the UK.

Chinese soldiers were actually fighting alongside American and British troops in early June 1944! An attack against prepared Japanese defenses along the Salween River in Burma saw tens of thousands of Chinese, American and British troops fall side-by-side in an effort to push the Japanese Empire out of Burma and eventually out of Southeast Asia completely. At that same time, the Chinese army in Hunan was struggling to survive the brutal Japanese offensive against Changsha, a battle they ultimately lost at the cost of 90,000 dead. It's estimated between 15 and 20 million Chinese died during the war.

By contrast, it's estimated the Allied landings on the coast of Normandy saw 4,400 Allied soldiers fall in battle. One would think that, given the immense evil that was disposed of by the Allied victory in World War II, the world leaders commemorating a major step on the road to that victory would have a bit more respect for their fallen comrades in that struggle.

During D-Day Commemorations Never Forget What the Soviets Gave