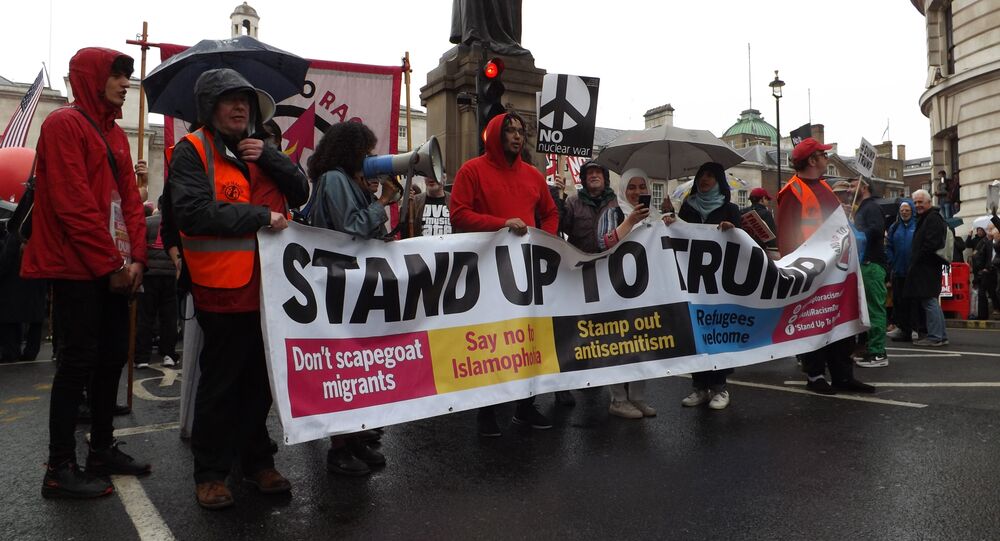 US President Donald Trump took to Twitter as protesters flooded the streets in London during his UK visit, saying he had heard of impending “massive rallies” against him, but in fact there were also those who had gathered in support of the USA and him.

In footage filmed on Tuesday, a man wearing a red cap with US President Donald Trump’s slogan on it was singled out by a group of anti-Trump protesters who chanted “Nazi scum” at him before hurtling a milkshake at the POTUS supporter.

The “milkshaked” man claimed he was peacefully debating with “moderate lefties” and “having a laugh with the majority of them” before he was mobbed, writes The Sun.

In the clip, he is seen shouting “here to stay” before throwing the creamy beverage back at the crowd.

A Trump supporter is milkshaked by a hostile crowd in Parliament Square.

The video later shows him lunging at the jeering group, with one cop on the scene attempting to intervene, before more officers rush in to escort the man away.

The victim of the angry mob later said he supported Trump because “he's done more than he said he was going to do for America”.

He added: “He's true to his word when he said he wants to make America great again.”

The footage doesn’t capture what sparked the flare-up, but reportedly the man was heard arguing with an anti-Trump protester about Parliament.

Speaking to the Daily Mail, the POTUS advocate said:

“We have to put forward how aggressive the left can be — it's not us, you know if they want to call me right wing because I'm supporting Trump then I must be right wing, but I'm not a racist”.

“I came out to support Trump, to stop the left who since we voted for Brexit have been protesting against democracy”.

“This is the democratically elected president of the free world. I just wanted a debate with the sensible left, I didn't expect any of what happened”.

In another exchange, a pro-Trump supporter filmed herself popping a giant blimp of the president before exclaiming “that's a disgrace”.

The Sun writes that the woman is believed to be Amy Beth Dallamura — AKA Based Amy — a well-known blogger who has been pictured at Free Tommy Robinson demonstrations.

US President Donald Trump tweeted his reaction to the incidents in the crowd, saying he had heard of impending “massive rallies” against him in UK, but in fact he’d witnessed those that had gathered in support of the USA and himself.

I kept hearing that there would be “massive” rallies against me in the UK, but it was quite the opposite. The big crowds, which the Corrupt Media hates to show, were those that gathered in support of the USA and me. They were big & enthusiastic as opposed to the organized flops!

The violent incidents among protesters followed an impassioned speech by Labour leader Jeremy Corbyn in Trafalgar Square, where he told the anti-Trump group that the US president had “created a greater sense of hate and hatred that goes with it”.

Earlier, at a Tuesday press conference with UK Prime Minister Theresa May, Trump slammed Corbyn for being “negative”, revealing that he turned down a request for a meeting from the Labour leader.

Trump said: “He wanted to meet, today or tomorrow, I decided I would not do that”.

“I don't know Jeremy Corbyn, I've never met him, never spoke to him. I think that he is, from where I come from, somewhat of a negative force”.

Milkshake or other beverage attacks targeting politicians have become a trend in Britain, with people beginning to dump the dessert on right-wing politicians and figures.

The first target was EDL founder Tommy Robinson when he was doused in milkshake twice in one day while campaigning to be an MEP in Bury and Warrington.

Since then, other right-wingers have also been pelted with beverages, including Nigel Farage, while out campaigning in Newcastle for the Brexit Party ahead of European elections.

UKIP candidate Carl Benjamin, who made a rape-related joke about a Labour MP, was also attacked with a milkshake.

Last month, a Brexit Party-supporting pensioner was soaked in milkshake outside a polling station.

Trump Insists Duchess Meghan Was 'Nasty' to Him, Reveals Talk With Prince Harry