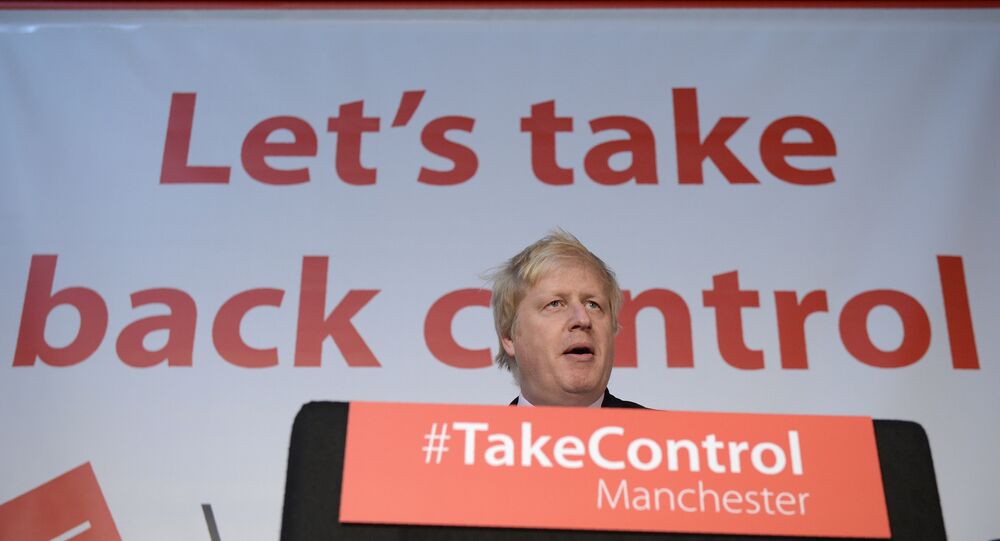 The UK's former foreign secretary, who is one of the lead candidates competing to replace outgoing Prime Minister Theresa May, has vowed to deliver Brexit "deal or no deal" in his campaign video.

Former British foreign secretary Boris Johnson, who is the main contender for the post of head of the British government, is confident that the postponement of Britain’s exit from the European Union threatens the existence of the country's ruling Conservative party.

According to a column penned by Johnson for The Daily Telegraph, either Brexit will be carried out on the agreed-upon date, or the United Kingdom's oldest political party will disappear.

"There is a very real choice between getting Brexit done — and the potential extinction of this great party," Johnson said.

© AP Photo / Thierry Charlier
Frontrunner Johnson Vows to Deliver Brexit, 'Deal or No Deal', In Campaign Video
Boris Johnson added: "We are facing an existential crisis and will not be forgiven if we do not deliver Brexit on 31 October."

Johnson hopes to enlist the support of party members.

On Monday, the former UK foreign secretary launched his bid to replace outgoing Prime Minister Theresa May on Monday, insisting Brexit has to be delivered by 31 October with or without an exit deal.

Earlier, US President Donald Trump said that he believes former UK Secretary of Foreign Affairs Boris Johnson would make a very good replacement for Prime Minister May in the United Kingdom.

The UK was originally slated to leave the EU on 29 March, two years after submitting a written notice of withdrawal. However, the House of Commons refused to ratify Theresa May's agreement with the EU on the terms of the UK's departure three times. As a result, the EU agreed to postpone the date of Brexit first to April-May, and then to October 31.

Frontrunner Johnson Vows to Deliver Brexit, 'Deal or No Deal', In Campaign Video