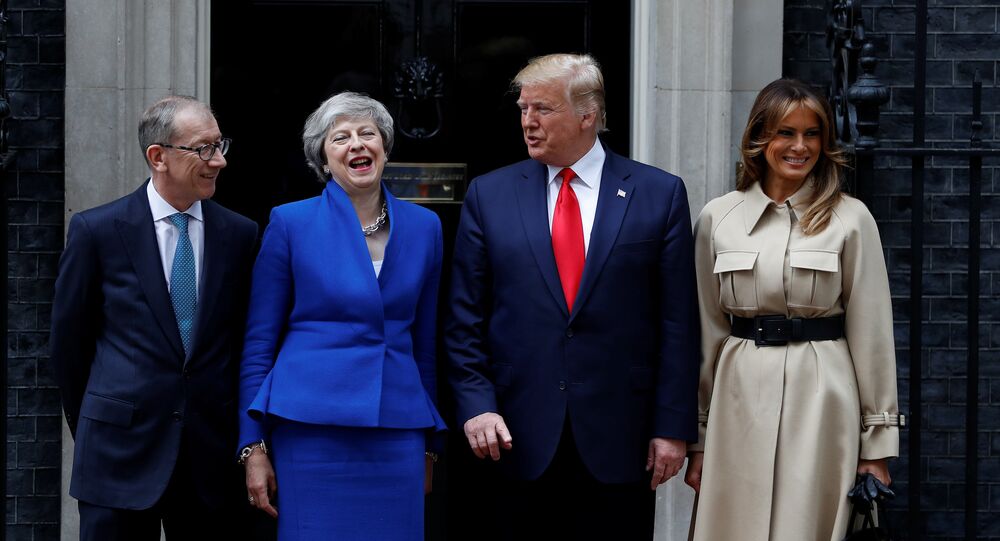 LONDON (Sputnik) - US President Donald Trump said on Tuesday that he expects Brexit will happen because the United Kingdom wants to have its own identity and run its own affairs.

"I would think that it will happen and it probably should happen", Trump said during a joint press conference with British Prime Minister Theresa May. "This is a great, great country. It wants its own identity. It wants to have its own borders. It wants to run its own affairs. I believe it would be good for the country".

Speaking further about Brexit, the US president expressed Washington's commitment to inking a "phenomenal trade deal" with the United Kingdom after it leaves the European Union.

"As the UK makes preparations to exit the European Union, the United States is committed to a phenomenal trade deal between the US and UK", Trump said during the joint news conference with UK Prime Minister Theresa May in London.

Trump added that the deal would open up "tremendous potential" and allow the two countries to boost bilateral trade to "two or even three times of what we are doing right now".

© REUTERS / Jason Lee
Huawei Pauses Production of Smartphones Amid US Blacklisting - Reports
Trump also touched upon the Huawei issue, saying that he had discussed it with UK Prime Minister Theresa May and expects to reach an agreement with the United Kingdom on the matter.

"We are going to have absolutely an agreement on Huawei and everything else", Trump said during the joint news conference with May in London.

Trump expressed confidence that the United States and the United Kingdom will be able to work out all the differences they may have with respect to Huawei, adding "We did discuss it, I see absolutely no limitations".

The United Kingdom’s Queen Elizabeth-class air carriers and US F-35 fighter jets will soon be at the disposal of the North Atlantic Treaty Organisation (NATO), UK Prime Minister Theresa May said on Tuesday during the press conference in London with US President Donald Trump.

“I am pleased to announce that NATO will soon be able to call on the UK’s Queen Elizabeth-class air carriers and F-35 fighter jets to help tackle threats around the world", May told reporters.

© AFP 2020 / Petras Malukas
US Navy Ship Enters Baltic Sea For Drills as NATO Beefs Up Activities
Trump, meanwhile, noted during the joint news conference that he expects more NATO member states to increase their defence budgets to 2 percent of GDP.

"The Prime Minister [Theresa May] and I agreed that our NATO allies must increase their defence spending", Trump said. "We expect the growing number of nations to meet the minimum of 2 percent of GDP requirement".