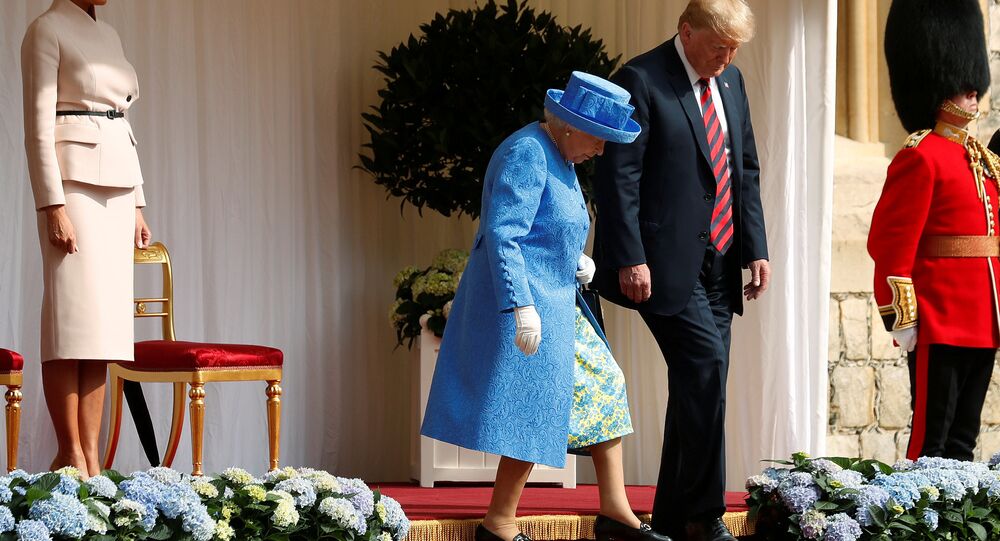 The UK government last night pleaded with the public to welcome the US president to London, arguing that “the special relationship is generational, not one person”, after calls for the Queen to scrap the royal banquet were sparked.

As the UK prepares for the US president’s state visit, ministers and courtiers at the Royal Palace fear Donald Trump could embarrass the Queen by openly speaking out in favour of Brexit at the official banquet on Monday, the Daily Mail reported citing sources in the palace.

Despite the Royal Family's painstaking attempts to remain above the political affray, those involved in the planning of the visit are anticipating Trump might use his address at Buckingham Palace to heap praise on the UK's decision to quit the EU.

In a bid to allay the fears, palace sources last night maintained the Queen would be “more than capable” of dealing with controversy, while Foreign Office insiders denied broaching the subject with Washington.

© REUTERS / Hannah McKay
Trump Urges UK to ‘Walk Away’ From Brexit Talks if EU Doesn't Show Flexibility
A Whitehall source said: “We've learnt that asking them to steer the President off a subject tends to have the opposite effect.”

Earlier, when interviewed by the The Sun ahead of his UK visit, he said he was surprised to learn that Meghan Markle, Duchess of Sussex, had made “nasty” comments about him.

© AFP 2021 / SAUL LOEB
Trump Denies Calling Meghan Markle 'NASTY', Blames 'Fake News Media'
Trump took to Twitter to dismiss claims that he called the Duchess of Sussex "nasty", adding these rumours were spread by "fake news media", singling out CNN and the New York Times.
© REUTERS / Toby Melville, AFP, Jewel Samad
Trump Says Boris Johnson Would Do 'Very Good Job' as UK’s Next Prime Minister
As for likely Brexit blunders, these might come in the wake of earlier comments by the US president, who said Britain’s next prime minister should “walk away” from trying to clinch a Brexit deal with the EU if Brussels fails to yield to the UK’s demands.

Trump was speaking with the Sunday Times ahead of his state visit, urging London to “sue” the EU in order to give Britain greater “ammunition” in the Brexit talks.

During the visit, Trump is scheduled to sit down with outgoing Prime Minister Theresa May, who announced her resignation late last month due to her failure to resolve the Brexit deadlock, and discuss “many things” on the bilateral agenda, including those pertaining to trade and security, according to White House officials.