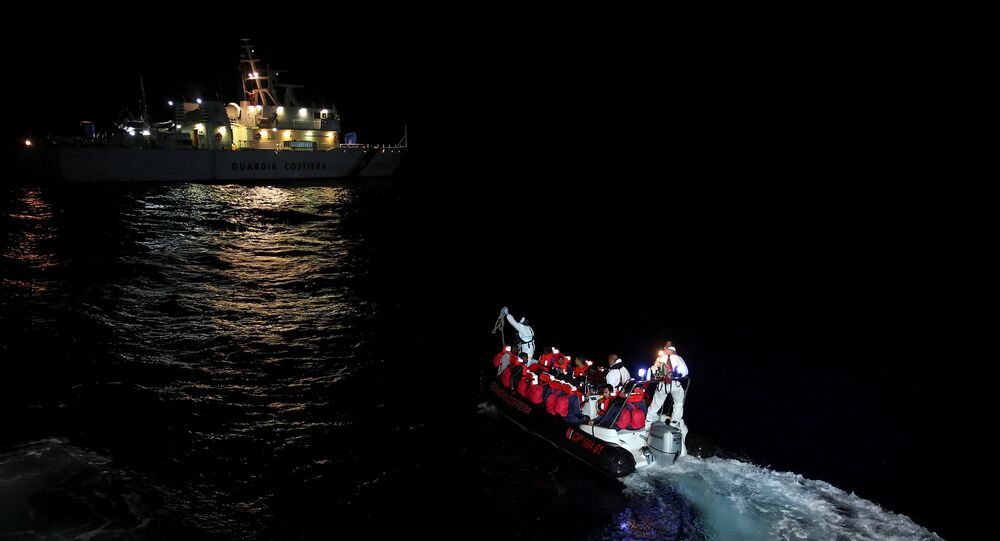 GENOA (Sputnik) - An Italian Navy ship that rescued 100 migrants who departed by sea from the Libyan coast earlier in the week to find refuge in Europe disembarked its passengers in the port of Genoa on Sunday, a Sputnik correspondent reported from the scene.

People who were brought to the port by a naval ship are now undergoing security and sanitary checks. An Italian Red Cross team is working on the site.

"The health condition of people from the ship is stable, only seven have scabies, and one young girl was taken to a hospital," a doctor from the Italian Red Cross told reporters.

When the ship was approaching the port of Genoa on Saturday, it was welcomed by the broadsheet saying "Welcome (Benvenuti)" unfurled on the port’s lighthouse, one the main symbols of the city. The next day, however, the banner was removed.

© AFP 2021 / ANDREAS SOLARO
Italian Ports Will Remain Closed Due to Risk of Libyan Terrorist Presence on Migrant Boats - Salvini
As of 3:00 p.m. local time (13:00 GMT), all migrants got off the ship.

Italy is one of the main entry points to Europe for undocumented migrants fleeing hostilities and poverty in Middle Eastern and North African countries. Libya, in turn, is the main transit country for such migrants. According to the UN figures, the vast majority of migrants who cross the Mediterranean to Europe — about 90 percent — depart from Libya.

Meanwhile, according to non-governmental organizations, approximately 3,000 migrants trapped in Libyan detention centers are currently facing an "imminent" risk of being caught in the crossfire of renewed violence in the country and must immediately be evacuated to safety.